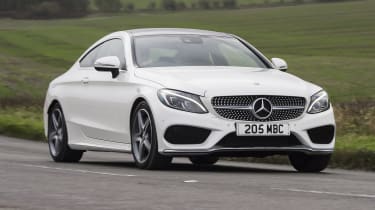 From behind the wheel, the Mercedes isn’t quite as sharp as an Audi A5 Coupe, but the rear-drive chassis offers more balance. It’s just a shame that the rest of the driving experience doesn’t live up to the looks; in Sport or Sport+ driving modes, the C-Class’s steering feels heavy and lifeless. While there isn’t much feedback relayed through the Audi’s wheel, its lighter steering weight and immediacy makes it feel more transparent.

The C-Class doesn’t have the ultimate grip of the A5, but there’s more than enough. It’s also better mixed with the Mercedes’ more forgiving ride, especially with air-suspension, which makes it easier to live with.

Even after only a few miles in the driver’s seat, it’s clear the C-Class Coupé isn’t as sporty or precise as an A5. Instead, the focus is definitely on comfort, as the Mercedes rides nicely. Engineers have scaled down what makes the S-Class flagship so comfortable, but while it’s cosseting most of the time, the C-Class isn’t perfect. Even with the £895 Airmatic dynamic handling package, featuring air-suspension, the set-up still transmits some harsher knocks through to the cabin.

This is only under more extreme conditions on broken roads, as the Mercedes still floats over most surfaces with a more settled gait than the Audi. If you’re after the perfect ride, choosing the Airmatic package with the smaller 17-inch wheels offered as standard on the Sport model is the best option.

Standard non-AMG cars come with rear-wheel drive to give the best balance of handling, however Mercedes does offer 4MATIC all-wheel drive for just an extra £1,500 on the C 200 petrol and both diesels. It’s a clever system that can split the engine’s power 50:50 to the front and rear axles in really difficult conditions, or send 100 per cent of the power to the rear wheels. The system constantly monitors road conditions, meaning 4MATIC is a good choice for those who like the reassurance of year-round grip. 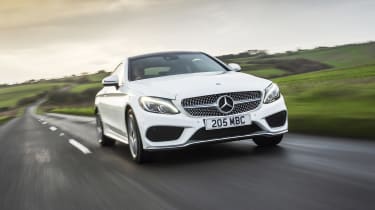 Mercedes have long carved out a reputation for producing good automatics and the nine-speed version (in the diesels) is good, slipping through years easily while the seven-speed version in the Mercedes-AMG C 63 and C 63 S is similarly impressive. However, the six-speed manual is a little notchy and not as accomplished as the gearbox used in the BMW 4 Series Coupe – even though the manual box in the BMW has a slightly rubbery feel. In fact, the BMW is the more fun and involving coupe compared to the C-Class and could be considered to be more of the ‘driver’s car’. That’s not to say the C-Class Coupe is lacking – it’s noticeably more fun to drive than the Lexus RC, for instance.

The 2.0-litre petrol is a little flat for a sports coupe. We’ve tried the C 300 and on paper, it looks good: 0-62mph takes a very respectable six seconds, with top speed limited to 155mph. However, it doesn’t make a particularly pleasant noise, emitting a drone rather than a tuneful roar. Push the throttle harder and the noise turns harsh – made all the worse by sports exhaust. Progress is not as smooth as you’d expect, either, with power delivery suffering from a little turbo lag at lower revs.

Happily the 3.0-litre twin-turbo V6 is much better. It’s a brand new engine and just like most V6s, it’s smooth whilst delivering great performance coupled with a great soundtrack. It packs considerably more punch than the equivalent BMW 440i Coupe, but unfortunately the engine is only limited to the Mercedes-AMG C 43 – a half way house between the C 300 and the full-fat Mercedes-AMG C 63.

Diesel versions of the C-Class will appeal to those considering running one as a company car. The diesel is a 2.1-litre unit but with two power outputs – 168bhp in the C 220d and 201bhp in the C 250d. While the 2.0-litre petrol is just a little unexciting, the old 2.1-litre diesel is noisy. The new Mercedes E-Class gets an all-new 2.0-litre four-cylinder diesel which is far better than this ageing unit which isn’t particularly smooth or quiet. We’ve only driven the higher-powered C 250d and felt it’s a little strained at high revs and coarse on tickover, but it does offer decent punch – 201bhp and 500Nm of torque translates into a 0-62mph time of 6.7 seconds.

In-gear performance is also impressive, thanks to the shorter ratios of the nine-speed gearbox and the extra punch from its engine when compared to the Audi A5 Coupe’s 2.0 TDI; the C-Class delivers its maximum torque low down from just 1,600rpm, so there’s not much lag to contend with. 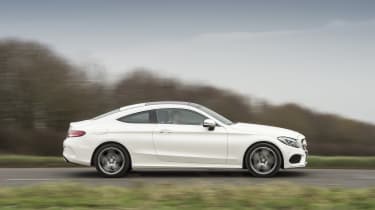 Right at the top of the pile are the C 63 and C 63 S. Powered by Mercedes-AMG’s new 4.4-litre twin-turbo V8, it’s a fabulous engine – punchy, torquey with a great spread of abilities. It also makes a fabulous noise and is well paired with Mercedes’ seven-speed automatic gearbox. It comes in two power outputs – 469bhp in the C 63 and 503bhp in the C 63 S.