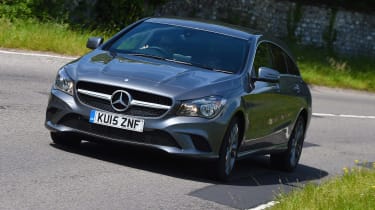 We love the way the forward-thinking CLA Shooting Brake blends practicality and style, but there are contradictions in the way it drives. The overly firm suspension, even on the smallest 18-inch wheels, and sports seats suggest a sharp drive, but the noisy and underpowered '200' diesel engine is a blunt instrument. There’s a surprising amount of interior space, especially given the plunging roofline, plus the fuel economy figures are impressive, but quite simply the way it drives can’t match the way it looks.

The Mercedes CLA Shooting Brake is designed to appeal on many fronts, offering the sporty styling of coupe model, the practicality of an estate car, and the premium appeal of the German manufacturers famous badge. That’s the theory, but does it hold water on UK roads?

The stylish Mercedes CLA sits beneath the larger CLS Shooting Brake in the line-up, but copies its successful formula. It’s a spin-off of the Mercedes CLA saloon which rivals the BMW 1 Series and Audi A3, but in Shooting Brake (estate) guise there’s little in the way of direct competition. The Honda Civic Tourer and Volkswagen Golf estate are a similar size, but lack the Merc’s styling panache – although both knock the CLA into a cocked hat for ultimate practicality. Folding the rear seats down in the Mercedes liberates a maximum of 1,354 litres of boot volume, whereas the Golf and Civic boast 1,620 and 1,668 litres respectively. 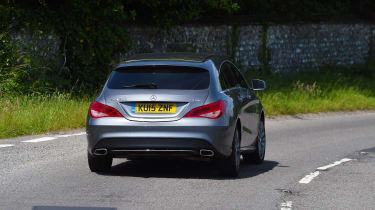 With seats upright, the Merc’s 495 litres doesn’t look too clever against the Civic either, and in fact it’s hardly a massive improvement on the 470-litre boot of the CLA saloon – although the CLS’s hatchback tailgate makes it easier to load. The Mercedes CLA price – especially once you start loading on the extras – takes it out of contention with its more mundane rivals too.

But does the Merc make up for its practical shortcomings with advantages in style and driving performance? On the design front the CLS is certainly arresting, with its sharply descending roofline and arrow-like glass profile giving a dynamic feel. From some angles it looks a little tail-heavy perhaps, and the swoopy lines mean the interior is a little claustrophobic for rear seat passengers – especially tall ones. Indeed, on a road trip to Cornwall, we had complaints or car sickness from two adult passengers in the back, and both blamed the enclosed feel. Up front the cabin accommodation is identical to that in the CLA saloon, with good visibility and part-leather seats that are surprisingly more comfortable than their ‘sporty’ looks suggest.

It’s a shame the same can’t be said of the suspension that crashed its way through London, smoothed out on the motorway, then went back to feeling way too firm on Cornish back roads, leading to more complaints from the pair in the back. What’s really disappointing was that our entry-level model in Sport trim was on the smallest-available 18-inch wheels and did without the lowered springs fitted to AMG Sport models. 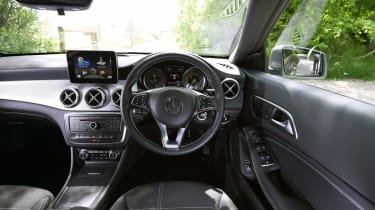 The steering is quite light, but reacts quickly enough, while the suspension keeps body roll in pretty tight check, unless the car is fully loaded. But unless you go for the 355bhp CLA 45 AMG Shooting Brake it’s no sports car. In fact, our 134bhp 200 CDI model felt underpowered with four passengers and a five days worth of luggage in the back. Once up to speed on the motorway it can pull you along all day, but getting there is a bit of struggle, as is listening to the diesel clatter when equivalent engines from BMW and Audi are so much quieter.

We’d recommend forking out an extra £1,400 for the more powerful 220 CDI model with 175bhp and 350Nm of torque. Not only do you get some welcome extra poke, but the economy and emissions penalty is negligible, returning 67.3mpg and 108g/km versus 68.9mpg and 106g/km in the 200 CDI – putting both diesels in the same 19 per cent company car BIK bracket, and the same £20 a year road fund.