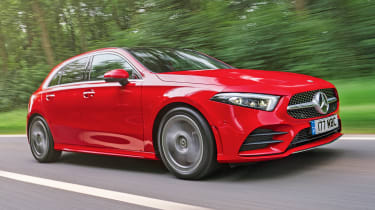 The Mercedes A 220 d delivers that big-car feel of power and comfort better than the rest of the A-Class range – but it comes at a price. While it’s only £1,500 more than the A 200 d in AMG Line trim, the lower-powered engine can be had for around £3,000 less if you forego some sporty bits. For many, the choice will be between the 220 d’s more potent engine, or a cheaper 200 d with some enticing options.

For all the talk of electrification, diesel is still big news in the UK market – and not only in terms of mpg, either. It’s a mark of how far things have come that this, the Mercedes A 220 d, offers up not only a claimed 50mpg-plus, but also performance that’s not far from hot-hatch territory.

That final point was maybe a deciding factor in the brand offering the A 220 d only in AMG Line and related trims. It gives a warm-hatch look and feel, providing decent comfort and as much performance as most drivers really need. In fact, the A 220 d’s seven-second 0-62mph time is the second quickest in the range – plug-in hybrid and proper AMG versions aside.

Accelerate in the A 220 d, and you feel a huge swell of torque that peaks at 1,600rpm and plateaus at 2,600rpm. For most drivers, in most conditions, this means the engine is often in its most effective operating zone. The standard eight-speed auto box really helps here, shuffling between ratios quickly and decisively. 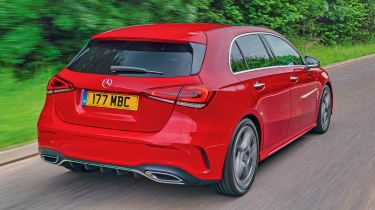 Press on beyond that zone and, despite the A-Class’s otherwise good refinement, the engine does get a little coarse and rattly. It’s one of the very few areas where the car blots its copybook.

The best way to approach the A 220 d is as a quick family hatch that’s easy to live with. The ride is good on the whole, as you might expect – although big bumps do unsettle things. It’s eager to turn in, and feels reasonably darty in Sport mode, even if the steering is a little more removed in its Eco and Comfort settings.

It feels more secure than lower-spec A-Class variants, with the cheaper torsion-bar configuration of those cars being replaced by a multi-link set-up. At speed, there’s a real sophistication in the balance of ride and handling; it all seems very ‘Mercedes’ indeed.

The A 220 d offers that big-car feel, and the various AMG Line trims in which it’s available provide a decent amount of big-car tech. Highlights are mainly cosmetic, and include Artico leather with racy red stitching, an AMG bodykit and 18-inch alloys. The design of the last of these makes them look smaller than they actually are. 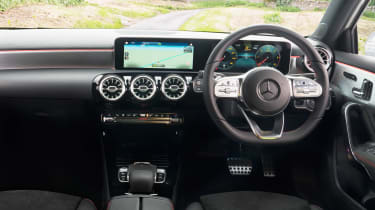 Elsewhere, the A 220 d AMG Line shares the brilliance of the rest of the A-Class range. Chief of these is its stunning interior, which is generally pretty spacious and comfortable. Nothing in the sector matches its look, feel and general upmarket ambience. The solidity is at least the equal of an Audi’s, with various knurled dials and touchpads working to control the many features easily and intuitively.

Special mentions must go, once again, to the MBUX infotainment system, with its truly excellent “Hey Mercedes” speech-recognition function. It’s only a shame that some of the other tech isn’t fitted as standard. If you want Apple CarPlay and Android Auto – and you probably do – that’ll cost you another £495.

The wonderful 10.25-inch instrument cluster is an extra £1,500, although in our test car it was bundled as part of a budget-busting £3,595 pack that also includes matrix LED headlights, self-parking and a panoramic sunroof. All of these options are also available on the lower-powered A 200 d, so is the 220 d worth the extra outlay?

Both share the same rear suspension, so the biggest difference is, predictably, performance. The A 220 d shaves 1.1 seconds off the 0-62mph time, and with a top speed of 146mph, betters the lesser car by 9mph. Yet it’s the in-gear flexibility that impresses most of all. With a difference in list price of £1,550, the monthly payments won’t be that far apart, either.