Can the new E-Class estate possibly be as good as the award-winning saloon? 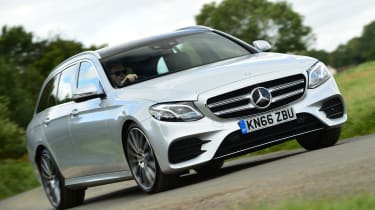 Like the saloon, Mercedes’ E-Class Estate sets new standards for refinement in the class, while its cavernous boot eclipses its rivals when it comes to load space. However, in pricey AMG Line trim it’s not perfect; while the ride is fluid in the most part, it’s questionable over choppy roads. We’d recommend going for the standard SE model and spend the cash you’d save on a few desirable options.

Back in July, the Mercedes E-Class took the Best Executive Car title at the Auto Express New Car Awards – thanks to its blend of performance, equipment and superior refinement. But now the firm’s E-Class Estate has hit the UK, you can add practicality to that list, too.

An executive estate needs to have a big boot, and Mercedes’ largest wagon duly delivers here, with 640 litres of space. This is 80 litres more than a Volvo V90 and 75 more than an Audi A6 Avant, while the Merc’s massive 1,820-litre load bay with the rear seats folded flat is nearly 300 litres up on the Volvo and 140 litres larger than the Audi. A standard power tailgate also boosts practicality.

Clearly the E-Class Estate has what it takes to be a contender as an upmarket load-lugger, then, and this is reflected both inside the Merc’s cabin and in the way it drives.

Our AMG Line spec test car isn’t cheap at £40,430, but it comes laden with advanced equipment. Merc’s clever COMAND Online navigation system is standard, featuring an 8.4-inch tablet-style display. However, on our test car this was replaced by a larger 12.3-inch screen as part of the £1,495 Media Interface upgrade to go with the £495 12.3-inch screen that shows the digital dials.

Like the saloon, the dash looks slick and everything is easy to operate from the rotary controller on the transmission tunnel. And there’s plenty to operate, with Android Auto and Apple CarPlay, Bluetooth, DAB, in-car internet and remote parking all fitted. 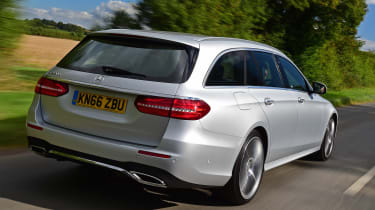 However, while the cabin is beautifully trimmed and the materials soft to touch, the car comes with man-made leather as standard. The real stuff costs £1,595, which seems strange on a car as plush as this. At least the seats deliver lots of comfort and plenty of adjustability, as this top-spec trim level gets Merc’s Seat Comfort Package with electric adjustment included.

AMG Line trim also adds a sportier body kit and 19-inch wheels, but our test car was fitted with even larger optional 20-inch wheels costing £595, meaning the E-Class looks the part from the outside. The wagon body style makes it easier to tell the E-Class apart from the smaller C-Class, too.

The wheels come on low-profile tyres, and while our test car’s standard steel spring setup delivered a smooth, controlled ride over some challenging surfaces, potholes do send the alloys thumping into the wheel wells and a shock through the chassis. 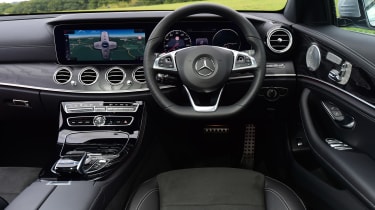 These jolts erode the E-Class’s comfort, so we’d recommend sticking to the standard wheels. However, the damping is forgiving, which means on long journeys the Merc delivers just as much comfort and refinement as its saloon sibling.

The German brand’s new 2.0-litre four-cylinder turbodiesel works just as well here as it does in that car. Coupled to Merc’s nine-speed automatic box, the 191bhp unit offers more than adequate acceleration even with the extra 100kg the estate body adds over the saloon.

The 0-62mph sprint takes 7.7 seconds, but it’s the E 220 d’s in-gear performance that’s more impressive. With nine ratios the Merc is almost always in the right gear to make the most of the 400Nm of torque, which is available from as low as 1,600rpm. If you’re not in the right gear, the transmission kicks down quickly but smoothly, imperceptibly slurring upshifts as you accelerate through the rev band. 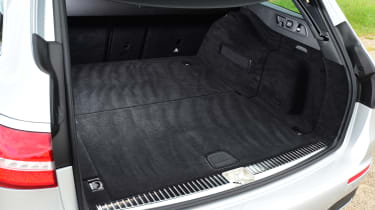 Unfortunately, we don’t get the clever lane change function for the latter in the UK, but with Steering Pilot keeping you in your lane on the motorway, it’s still a nice convenience feature – albeit an expensive one – that works extremely well.

With emergency braking as standard, safety is good. The E-Class also gets nine airbags, so it shares the saloon’s full five-star Euro NCAP rating.

The final feather in the car’s cap is its impressive efficiency. Mercedes claims 67.3mpg combined and 120g/km CO2 for this AMG Line car, but this drops to 109g/km for the entry-level SE model. With a good-sized fuel tank, it gets a sizeable cruising range.