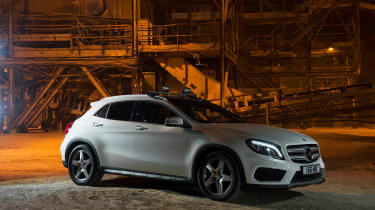 The New Mercedes GLA is the softest of all the soft-roaders. But while it looks like a slightly beefed-up hatchback, its extra practicality and comfort are a big plus when compared with the A-Class with which it shares a platform. Mercedes is new to doing front and four-wheel drive hatchbacks and SUVs in any sort of volume, and the extra learning that’s gone into the GLA really shows. It’s a step on from an A-Class, and now much more deserving of its Mercedes badge.

Mercedes calls the GLA a compact SUV. But while it’s pegged as a rival for the Audi Q3 and BMW X1, it seems much less rugged– more like an Audi Allroad, or – whisper it – a Rover Streetwise. All that sets its exterior apart from an A-Class is a little plastic cladding, some roof rails, and chunkier bumpers, although, to be fair, the GLA appears quite a bit bigger than its sister car in the metal, and noticeably higher-riding, but it’s a soft-roader at its softest.

Inside, you still drop down into the driver’s seat, even though it’s mounted higher than in an A-Class. That also means you don’t truly benefit from the commanding driving position that SUV buyers covet. It also takes some time to get the seat and wheel set in a comfortable position, but once you’ve got it right, visibility is pretty good.

The GLA’s ride is much more comfortable than the overly firm A-Class, even with the sports suspension on our test car. The taller tyres and raised ride height over the A-Class mean the GLA is more able to soak up bumps in the road, although if you opt for the larger 19-inch wheels, the ride gets a bit jiggly. 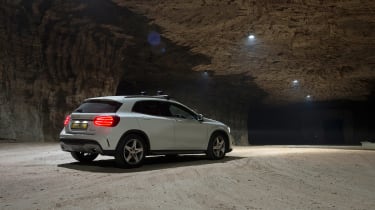 The steering is OK initially – it’s light and has quite a mechanical clunky feel just off centre, as the power steering motor wakes up to give its electric assistance. But as you built the lock up, weight is added artificially, so it feels like you’re winding a rubber band up with the steering wheel, rather than driving a car.

That said, although there isn’t a great deal of feel, the steering is pretty direct and the car responds quite quickly to your inputs, although the softer setup means the GLA’s body floats around a lot more than an A-Class’s does. But that’s a trade-off that’s definitely worth making, as the GLA is much more comfortable as a result.

When you accelerate, grip is good – the predominantly front-wheel drive transmission can send up to 50 per cent of torque to the rear wheels if needed. This gives plenty of reassurance, even on really wet roads, helped by the brakes doing a pretty decent job of slowing the car’s 1,535kg weight.

As in other Mercedes models, the 2.1-litre diesel is a strong performer, but it’s still really coarse and noisy right across the rev range, and is only silenced when you pull up and the stop-start system kicks in. The seven-speed dual clutch gearbox is smooth when you’re cruising, but again it’s let down by the fact it doesn’t seem to be able to pick the right gear in a way that Audi’s S tronic or BMW’s auto does.

While it isn’t overtly SUV-looking, the GLA is more practical than an A-Class, with a bigger boot and more rear-seat room, although the low roofline does limit the view out for taller back-seat passengers. The boot is over 40 per cent bigger than an A-Class, and it does look quite sporty, too, especially in the AMG Line-spec tested here. 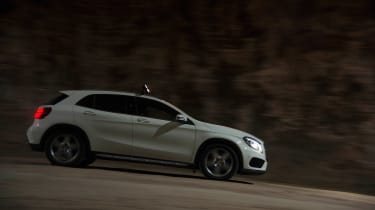 It’s very much on-road biased, but its ride height increase, plus tech like hill descent control, means it’ll take on a churned-up gravel trail alright, as long as you take it easy.

All of which means the GLA has a sporty look, better practicality than an A-Class, and the ability to take on some light off-roading. So it just about qualifies as an SUV, even if it looks like something rather less rugged, and it certainly adds a level of comfort and space that makes it well worth the extra if you’re considering an A-Class.