Does the petrol-powered Mercedes GLC 250 SUV make sense? We hit the road to find out... 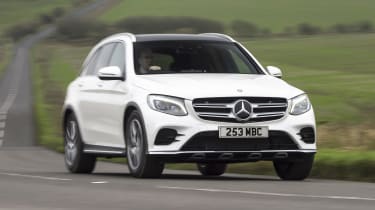 The Mercedes GLC 250 petrol’s relatively poor fuel economy makes us wince a little, but it’s far from a deal-breaker. For low-mileage buyers it shapes up as a pleasant proposition and the GLC remains a high-quality and comfy SUV. Some of the interior tech is beginning to feel outdated, but a facelift next year should solve this problem.

By 2040 the UK Government hopes to completely ban the sale of pure petrol and diesel cars. Yet look at the statistics for 2018 and you’ll see that a mini-revolution has been brewing.

While diesel models used to account for nearly half of all British new car sales, registrations are down by 29.8 per cent and now stand at one third, and falling.

The petrol-powered Mercedes GLC 250 therefore seems like a car appropriate for the times. It’s a relatively new addition to the GLC line-up; aimed squarely at buyers nervy of diesel’s demise. On paper at least, it fills a neat, emerging gap in the market, and out on the road it feels like a pretty convincing option. 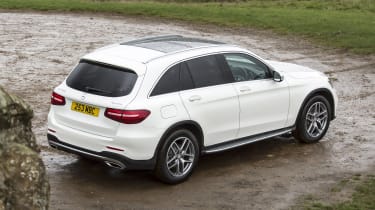 Using Mercedes’ latest 2.0-litre four-cylinder turbo petrol engine, the GLC 250 injects a bit more refinement into the ‘everyday’ (sub-AMG) end of the GLC line-up, which previously was a diesel-only zone.

Add the optional Air Body Control suspension set-up on our car (a £350 option), and the 250 immediately becomes the quietest and most comfortable member of the GLC pack. With the brand’s mid-size SUV a less dynamic proposition than a BMW X3, Jaguar F-Pace or Porsche Macan, the petrol motor feels perfectly at home here.

You probably won’t miss the extra grunt of the 250 d model, either. While the petrol version’s 350Nm torque figure leaves it 150Nm down on the diesel, it weighs 120kg less – and as such it outguns its sibling from a performance perspective.

Every version gets the same high-quality interior, with enough space for all the family and their luggage. While the infotainment system is starting to show its age alongside more modern Mercedes models such as the G-Class, it’s still packed with tech. 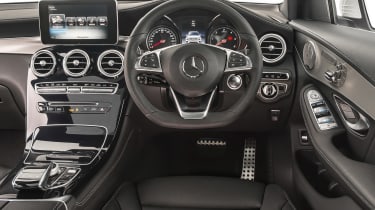 This version costs around £1,000 less than its diesel-powered GLC 250 d twin, and sits in a lower Benefit-in-Kind (BiK) company car tax band, too. But there’s no avoiding the fact that the petrol GLC will cost more to run.

Official fuel economy of 37.2mpg puts it near enough 10mpg shy of the entry-level 220 d. Even the 250 d will officially return more than 45mpg – so while the petrol car is an enticing proposition, it’s likely only to find favour with lower-mileage motorists.