If you have to have a coupe SUV, the Mercedes GLC Coupe is certainly one of the better choices 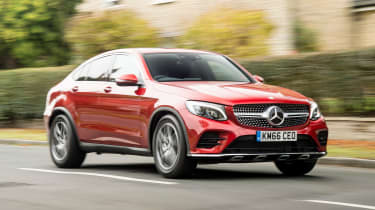 The Mercedes GLC Coupe’s price premium over the standard GLC means we’d still recommend the conventional SUV. If you’re dead set on a coupe-SUV, however, this car’s sleek looks, impressive interior and decent running costs mean it’s a top choice. It’s more powerful, more efficient and better looking than a BMW X4, its main rival. It’s comfortable too, even on British roads, and nobody could argue that it doesn’t stand out from the SUV crowd.

The Mercedes GLC Coupe has finally arrived in the UK, taking on the BMW X4 in the niche coupe-SUV segment. To many it’s an odd market, with the practicality aspect of the SUV compromised by the swooping roofline, but to others these cars are sporty-looking family cars with a desirable high driving position.

Even if you don’t see the appeal of a coupe-SUV, the GLC Coupe is definitely one of the better-looking efforts so far, with a sleeker, more natural shape than the awkward-looking X4. It’s much less brash than the larger X6 and GLE Coupe models, too.

The GLC Coupe certainly attracts more attention than the standard GLC, which it’s closely related to. But, aside from a few chassis set-up changes, mainly to the suspension and steering, the two cars are almost identical underneath.

That means the GLC Coupe is good to drive, if a little dull: a Porsche Macan or Jaguar F-Pace would definitely be a better bet if you’re looking for excitement, although neither are technically coupe-SUVs. The Mercedes’ steering doesn’t have much feel, and there’s still body roll through corners. While the GLC Coupe is not exactly fun to drive, there’s plenty of grip and the optional air suspension on our test car helps adapt the car’s character to different situations.

You can choose between Eco, Comfort, Sport and Sport+ modes, or an individual mode that lets you set up the car as you choose. In Sport mode, the steering gets heavier, although this doesn’t improve feel, and the suspension gets stiffer. It’s a bit too stiff for rural British roads, but in Comfort mode the GLC Coupe can make swift progress without too much of the road surface coming through into the cabin. 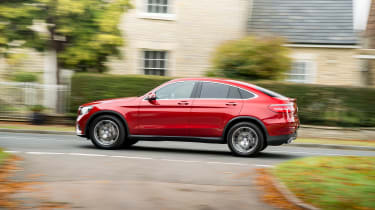 There’s not too much wind noise either thanks to the aerodynamic bodywork, although road and engine noise are noticeable. The 2.1-litre diesel in the 250d model has always been a gruff-sounding unit, and it’s the same story here, although it’s less intrusive than in the C-Class saloon.

Performance is good, with 500Nm of torque meaning the GLC pulls well in-gear on the motorway, and 0-62mph takes just 7.6 seconds. It feels strained while accelerating hard but use the lower end of the rev range to progress and it’s much more enjoyable. 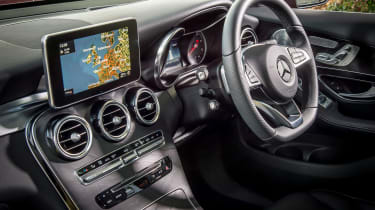 The nine-speed gearbox works well in that way, as it shifts smoothly most of the time. Occasionally if an unusual situation presents itself, like slowing down for a traffic light that then goes green, the gearbox throws in a lumpy shift, but that’s rare and on the whole it’s a well-suited ‘box.

Despite the changes over the standard GLC, those figures are identical to an equivalent version - but the Coupe costs £3,470 more than the normal SUV in the same trim. So you’ll really have to want the sleeker looks to go for the Coupe, as the numbers are hard to justify - the boot is smaller too, at 500 litres (50 litres less). 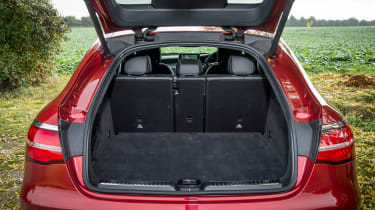 In the back there are three seats, and while legroom isn’t too bad, headroom for taller passengers is limited by the sloping roof. In the middle seat, the transmission tunnel and raised surface means adult passengers will be pretty uncomfortable.

As with much of Mercedes’ current range, however, the interior is one of the best of any car around the same price. The front seats are very comfortable, and the quality of the materials is superb. Plus, the dash design is excellent (apart from the slightly awkward-looking tablet-like screen stuck to the top) and the infotainment system is easy to use and looks good too.