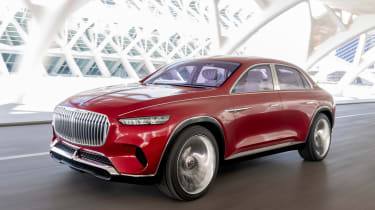 This vision of a future Maybach may have come too late, but it could have been truly special. This ultimate SUV-sedan would offer a totally new twist to the ever-growing segment of top luxury SUVs and, potentially, make cars like the Rolls-Royce Cullinan look outdated from the start. But this is another designer’s dream that will not come true anytime soon. And that makes it dangerous for Maybach; the brand has to deliver more than just another rebadged Mercedes if it is to retain any credibility.

Bentley has the Bentayga, Rolls-Royce will soon have the Cullinan – and even Ferrari is planning a jacked-up sports utility vehicle. But as yet, Mercedes’ luxury sub-brand Maybach hasn’t entered the world of SUVs.

Yet the company’s designers have shown their idea of how such a vehicle would look in the form of the Vision Mercedes-Maybach Ultimate Luxury. And now we’ve been for a quick spin to see how close it could be to reality.

The world of automotive luxury is currently divided into two halves – the traditional one, for ultra-refined limousines like a Rolls-Royce Phantom or Bentley Flying Spur, and the modern one in the younger economies, where luxurious SUVs like the Bentayga and the Lamborghini Urus are the real status symbols. 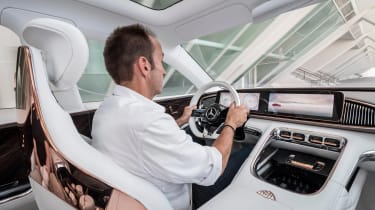 However, Daimler’s Chief Design Officer Gorden Wagener says this segmentation is outdated. As such, his team has tried to overcome the old boundaries with a brand-new bodystyle. Mercedes-Maybach has combined the bold look and the wide stance of an SUV with the traditional three-box-design of a limousine – and then added more glitz and glamour than on the poshest of Christmas trees.

The result is a 6m-long Sports Utility Sedan that stands on 24-inch wheels. It certainly attracted attention when it was revealed as the Vision Mercedes-Maybach Ultimate Luxury at the Beijing Motor Show back in April – and it’s even less inconspicuous as we take the car for an exclusive drive in sunny Spain.

While the concept is only capable of small speeds, in theory the car has all the ability to compete in the top luxury segment. With 740bhp and a 155mph top speed, it rivals the very fastest modern SUVs. An 80kWh battery means it is good for a pure-electric range of more than 300 miles.

While the driver needs a bit of imagination to enjoy the full capabilities of the concept, the passenger enters a new world by stepping up into a lounge of leather and luxury that has never been seen before. Not only are the seats unique, the centre console is covered in a rose-gold finish, inspired by pop artist Jeff Koons. And since the strongest market for Mercedes-Maybachs is in China, you’ll find a tea set in place of the Champagne flutes and whisky bottles that are more commonly requested by western customers. It is spectacular flamboyance at its best.

Sadly, even if the console holds an electronically controlled 85 degrees, the perfectly brewed tea will never be enjoyed. Because after the failed comeback with Maybach 57 and 62 saloons at the beginning of the century, none of the bean-counters at Mercedes is willing to pay for Wagener’s dream and risk another few hundred million Euros on a fresh (and unique) model. Especially one that would be as divisive as this.

But at least the show car was not made without rationale. The interior gives a very clear hint towards the cabin of the forthcoming Mercedes-Maybach GLS, due to arrive on the most well-manicured of driveways before the end of 2019.