The Mercedes-AMG S 63 now has a smaller 4.0-litre twin-turbo V8, but does it detract from its appeal? 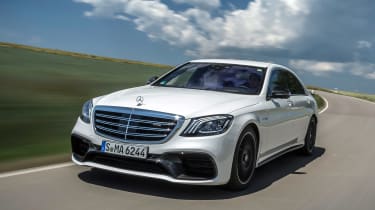 Some may say the S 63 is the least AMG-like model in the top-spec Mercedes range, but to suggest that would be to massively underestimate the car’s talents. It’s a fantastically well engineered product that beautifully mixes the best of the standard S-Class with the hard-edged drama of the finest AMG models. The S 63 makes far more sense than the bonkers V12-engined S 65, too, and while a Jaguar XJR is more engaging, no other fast limo is quite so complete as the Mercedes. The 2017 changes only improve what was a tremendously competent car.

You could say Mercedes-AMG peddles a nice line in performance cars. There’s definitely variety because, including AMG 43, 63 and 65 models, there are more than 30 AMGs in total, all fulfilling a different purpose. And somewhere between the A 45 hatchback and bonkers AMG GT R supercar are the S 63 and S 65 limos.

They’ve always offered the same opulence as the standard, but rather ubiquitous, Mercedes S-Class models, but with the added firepower associated with AMG’s famous hand-built engines. The result is two cars that are fantastically idiosyncratic, especially in the days of downsized engines and environmental concerns. Just like the rest of the S-Class range, these models have now received a selection of styling tweaks, plus the S 63 boasts a new engine.

The S 65 hangs on to its all-conquering 6.0-litre twin-turbo V12, but for the ‘baby’ S 63, bosses have bowed to environmental pressure by fitting a smaller V8. Spend £125,690 and you now get AMG’s new 4.0-litre twin-turbo instead of the fabulous 5.5-litre powerhouse in the pre-facelift car. 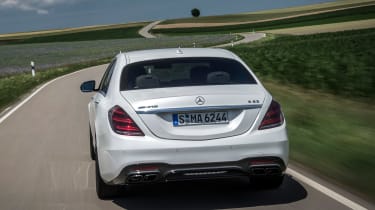 Both engines have 900Nm of torque, but the new 4.0-litre packs more punch – a mighty 604bhp compared with the 5.5-litre’s 577bhp. Despite the 0-62mph sprint time being one tenth quicker than before, both cars are pegged at 155mph thanks to an electronic limiter. The 4.0-litre claims 4mpg more, while CO2 emissions have dropped by a considerable 38g/km.

However, the startling news is that the new engine means the ‘lesser’ 63 trails the big daddy S 65 by just 17bhp, with both covering 0-62mph in an identical 4.3 seconds. The V8 is more economical, too. But to quantify both engines in terms of figures is pointless because despite being siblings, the S 63 and S 65 are inherently different cars.

You could say the 63 is aimed more at the driver, with its nearest rival being the even more eclectic Jaguar XJR. In most instances the S 63 travels along with all the majesty and comfort of a standard S-Class, but choose the right road and its unhinged character starts to shine. The car’s size quickly disappears and the twin-turbo V8 gives the normally soft S-Class a hard-edged side. Pin the throttle open and the engine erupts, shattering the S-Class’s usual serenity. 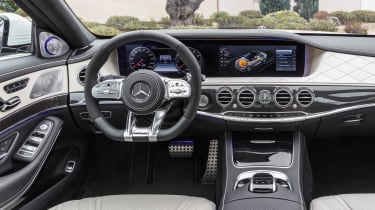 A new nine-speed AMG dual-clutch gearbox gives lightning-fast changes; switch to Sport+ mode and the exhausts open up and this two-tonne, leather-lined limo pops and crackles with all the indecency of AMG’s most uncouth supercars. And while the steering is a little over-assisted, especially just off dead centre, it weights up nicely and gives you the confidence to drive the S 63 with enthusiasm.

The only real downside to the smaller engine is that the 4.0-litre has lost some of the old engine’s big-bodied character. While there’s more power than before, the old 5.5 felt a little stronger with its power delivery. However, it’s such a minor point that most owners will struggle to tell the difference.

Where you will notice the difference against the XJR is that the supercharged Jag is more old-school in terms of engine response and feel, plus the Brit is more involving. For the ultimate fast limo, the Jag still has the edge, despite its advancing years, but the S-Class isn’t far behind and feels a more modern, more luxurious car.

As with the rest of the S-Class range, these 2017 updates bring in new bits of trim and tech; the most obvious change inside is a one-piece glass screen covering the two 12.3-inch infotainment and instrument displays. On the outside there are new LED headlamps with a three-piece daytime running light design. But the AMG models’ changes are less noticeable than on the standard Mercedes S-Class variants.

Just as before, the S 63 has loads of kit, with 20-inch wheels, ambient lighting, active parking and a reversing camera, as well as Nappa leather sports seats and a near-pitch-perfect Burmester surround stereo system. Sadly, Mercedes’ clever Magic Body Control system is no longer available; it now only comes on the V12-powered S 65 and Mercedes-Maybach S 650.

Click on the gallery above to see more of the Mercedes-AMG S 63...