Top-spec Mercedes-AMG SL 65 roadster has huge pace, but comes at a price 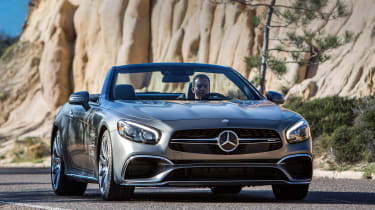 If you’re playing a numbers game, then the SL 65 is the one to beat – but that’s where its advantage ends. While it’s absurdly fast, in terms of performance, involvement and excitement, the lesser-powered and cheaper SL 63 beats it hands down. In the real world, the 63 feels faster and sounds better – never mind the near-£60,000 saving. The SL 65 has its place, but it is difficult to recommend over the cheaper car.

If the 577bhp Mercedes-AMG SL 63 we drove last week isn't quite mad enough for you, don't worry. Mercedes has also released the SL 65, which builds on that car with even more power and pace.

The SL 65 is powered by a 6.0-litre twin-turbo V12 engine, which churns out 621bhp and a stonking 1,000Nm of torque. That makes it good for a 0-62mph time of 4.0 seconds, with an electronically limited top speed of 155mph that can even be increased to 186mph with Mercedes’ driver’s pack option. 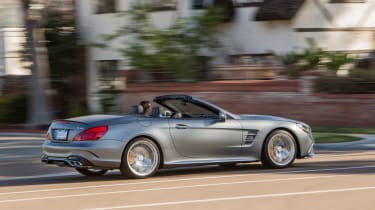 The car will set you back an eye-watering £173,295 – so not only is it one of the most powerful Mercedes on sale, but also one of the most expensive. Is this AMG worth it?

It’s almost £100,000 more than the entry-level SL 400, but sinking down into the quilted seats, it’s initially difficult to see where that vast sum of extra cash has gone. The cabin is still beautifully finished, but the switches, dials and overall design have just been carried over from the SL 400.

It’s the hand-built twin-turbo V12 that marks out the SL 65 – thumbing the starter button brings it to life, but for a big V12, it sounds rather muted. Lift off the throttle following hard bursts of acceleration, and you get violent bangs from the exhaust, but that’s about as exciting as it gets. 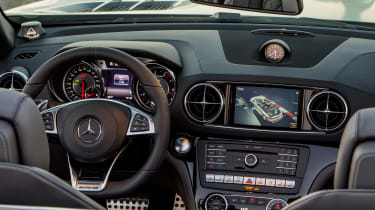 Yet regardless of how it sounds, the range-topping SL is still seriously quick. With two people on board, the roadster exceeds two tonnes, but that doesn’t appear to have much of an impact. Acceleration is relentless – the SL 65 seemingly builds speed at the same rate from 30mph as it does at 130mph.

However, at times that monstrous engine can overwhelm this AMG. For starters, it is very heavy –105kg lardier than the already portly SL 63 – and as most of that weight hangs over the front axle, it does feel as if you’re guiding a cruise liner rather than a sports car. The extra weight numbs the steering feedback, too, and it just doesn’t feel as eager to change direction as the cheaper SL 63.

There’s still a good amount of grip, but you find yourself carefully applying the throttle so as not to overwhelm the rear tyres, although the overworked traction control keeps everything in check. The Active Body Control helps it remain composed on the move, while active damping gives a smooth ride.