Supercar is even hotter, with more power, less weight and meaner looks! 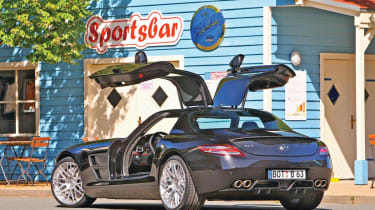 IF the standard SLS isn’t quite spectacular enough, the Brabus model should do the trick. But the impressive – and extreme – modifications do not come cheap: the fully built car costs around £205,000 with all the options added. And the company isn’t finished yet; it’s still working on more serious engine upgrades which will drive up the price even further. However, the level of craftsmanship and hand-built quality that has gone into each car will be more than enough to convince the wealthy few.

Improving the SLS AMG isn’t the sort of task you take lightly. But Mercedes’ official tuner, Brabus, has risen to the challenge – and come up with this lighter, lower, more powerful version of AMG’s stunning supercar. And Auto Express was first to open the famous gullwing doors and get behind the wheel.

The most obvious addition is a set of lightweight forged wheels. These multi-spoke items have been custom designed for the car by Brabus, and measure 20 inches at the front and 21 at the rear. The rims come wrapped in low-profile Michelin tyres and are specially approved by the firm for use on the SLS. As well as looking the part, the new wheels are 12 per cent lighter than the regular model’s, lowering the unsprung mass at each corner.

From the bodywork additions, it’s clear that the Brabus SLS is the product of many hours of honing in a wind tunnel. The company has created a unique carbon fibre lower splitter and optimised air intakes for the front bumper, as well as revised air outlets in the front wings – which incorporate Brabus lettering illuminated with LEDs.

At the rear, a spoiler and carbon trim with cut-outs for the titanium sports exhaust finish off the look. Slip into the interior and the firm’s handiwork is more obvious, thanks to a total re-trim which each customer can have tailored to their individual taste. Our car featured black leather upholstery with contrasting red stitching throughout, with the carpets replaced by quilted leather. Brabus has also recalibrated the speedometer to read up to 250mph.

But the most striking addition is a set of three buttons on the centre console to the right of the gear selector. These complement the starter, traction control, rear wing and AMG switches already fitted to the standard car.

The Brabus buttons are located in a small cubbyhole and activate three functions. While the regular model’s suspension is non-adjustable, the Sport control allows drivers to choose between a firm or comfort damper setting, depending on whether you’re cruising or on the track.

The button marked Exhaust lets you take charge of the car’s volume. In normal mode, the note is actually quieter than the standard pipes; press the switch, and a bypass valve opens, turning up the bassy V8 to a deafening level – and maximising your enjoyment of one of the best-sounding engines ever made.

Incidentally, the new exhaust is made of titanium and weighs 12kg – or 40 per cent less than the standard unit. It adds an extra 10bhp to the already potent 6.2-litre V8’s output, taking total power to 573bhp.

Finally, the Airlift button is for the height-adjustable suspension. This lowers the ride height by 40mm for an even sportier drive and a more aggressive stance.

On the road the SLS is already a stunning performer, but the upgrades to the dampers and the wide tyres provide it with even more grip. The effect of the new carbon fibre bodykit can only really be felt at very high speeds, yet the extra downforce from the new splitter and wing helps keep the car glued to the road.

The exhaust adds character, too. Release the bypass valve and the noise is like an American NASCAR racer at high revs – it’s a gloriously addictive howl.

Although the regular SLS features a compliant ride in most conditions, the softer set-up provided by the adjustable dampers adds comfort, which is very much in keeping with the new interior’s plush ambience. However, the Sport mode makes the two-door a far more hardcore proposition, allowing it to hug the road closer and, by lowering the centre of gravity, corner at even higher speeds.

The standard SLS is a stylish, hugely fast, everyday supercar, and the Brabus additions make it feel more special still – but such exclusivity does come at a cost.