Electric supercar takes battery power to next level. We drive it 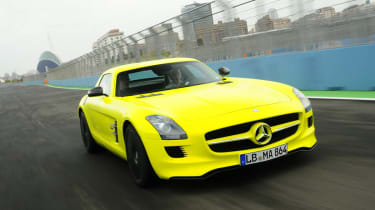 Despite being battery powered, the zero-emission SLS E-CELL feels every inch a ‘proper’ supercar because its performance is quite simply electrifying. However, it’s not quite the finished article yet. Merc needs to reduce the weight by 300kg and factor in more steering feel to ensure V8-level handling. It must reduce the price, too; it may have shown supercars can go green, but it also still looks like they will cost the earth.

It's the future of Mercedes – and it’s certainly bright! This electric version of the SLS AMG supercar is designed to help reduce the company’s overall CO2 emissions and deliver the thrills of the V8 model. But does it?
[[{"type":"media","view_mode":"content_narrow","fid":"69305","attributes":{"alt":"","class":"media-image"}}]]
Power for the E-CELL comes from four electric motors each driving an individual wheel. Combined they produce 528bhp, seven per cent less than the normal SLS. This doesn’t matter, though; torque is up by more than a third at a colossal 880Nm, all of which is available from idle.
The acceleration is breathtaking. At low speeds the pick-up is so violent, occupants would probably benefit from F1-style neckbraces, while the lack of gears means there’s no let-up in thrust. Bizarrely, however, the E-CELL still retains the steering wheel-mounted paddles. Yet rather than changing ratios, they allow the driver to alter the level of brake regeneration and effectively mimic the feeling of slowing down through the gears.

The E-CELL has a 125-mile range after a three-hour charge. The lithium-ion battery is actually made up of 324 individual cells which are located behind the seats, in front of the firewall and in the transmission tunnel to help maintain a virtually identical weight distribution to the standard SLS. However, tipping the scales at just over two tons, the zero-emissions version is a huge 400kg heavier.
You can sense this weight gain when cornering or making sudden direction changes. And, as well as a slight loss of agility, the E-CELL’s new electro-hydraulic steering isn’t as sharp as the fully hydraulic set-up of the standard car, either.
To be fair, our model was a prototype – Mercedes claims the production version, expected in 2013, will be lighter and have improved steering. It will also benefit from torque vectoring, allowing the power to be varied between each individual wheel for better handling.
Visually, though, the roadgoing model should be identical to the prototype. A unique grille, adjustable front splitter and a new diffuser with a distinct lack of exhaust pipes distinguish it from the V8. Inside, bespoke digital displays on the binnacle and centre console are in keeping with the cutting-edge powertrain.
The price? Although nothing has yet been confirmed, expect the E-CELL to cost at least twice as much as the V8.

Rival: Audi e-tron Essentially a slightly smaller electric-powered R8, the e-tron pretty much matches the SLS on performance. At launch in 2012, it will cost around £120,000 and be available in very limited numbers.