MG's first SUV is here! We test the value-orientated MG GS to get a handle on its pros and cons 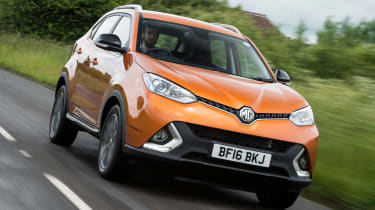 The MG GS is an SUV that offers plenty of practicality and equipment at a low price. It’s also comfortable and good to drive in town. MG’s SUV is let down by its engine, however, as there's only one on offer: a petrol that can only manage 46.3mpg. The boot is fairly small too - and if that's not an issue for you then you might as well move down to the even-better value SsangYong Tivoli.

After years of only offering two models, MG has finally released the GS, the brand's first SUV. It's a rival for the Nissan Qashqai, but MG's big selling point is the price: the range starts from £14,995, which is £3,555 cheaper than the entry-level Qashqai.

Even entry-level models get a decent kit list, with air-conditioning, automatic headlights and cruise control fitted across the range. So it's a promising start for the MG GS on paper, but we've finally driven it on the road. So how does it shape up?

Hop in and you'll find the same high-set driving position found in many of the MG's rivals, which gives you a good view of the road. There's plenty of adjustment in the seat and steering wheel, so getting comfortable isn't too difficult. The driving position isn't bad either, and helps keep things comfortable on the move. 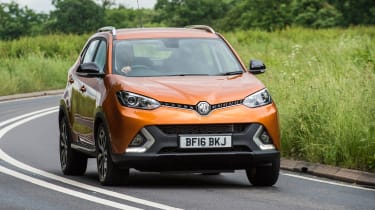 MG tells us the car is set up for British roads, and the suspension certainly soaks up the harsher dips and potholes you'll find on our streets. It's smooth at low speed too, so driving in town is a strong point as forward visibility is good. Unfortunately at higher speed the GS feels unsettled, bouncing over undulations in the road and feeling a touch too firm on bumpy surfaces.

Usually firm suspension helps when cornering, and that holds true to an extent in the MG. It's reasonably agile in corners, with less body roll than you might expect of a car like this. The steering is well weighted around tight corners, but is a bit inconsistent and feels too light and vague at the centre of the rotation.

The only engine available is a 1.5-litre turbocharged petrol with 164bhp, but you can go for either a manual or DCT dual-clutch automatic. The manual is a good choice, as the gearchange is slick and feels good. Long ratios mean it feels very strained during acceleration but performance isn't bad overall, particularly when compared to an equivalent 1.2-litre petrol Qashqai. It can tow up to 1,750kg, too. 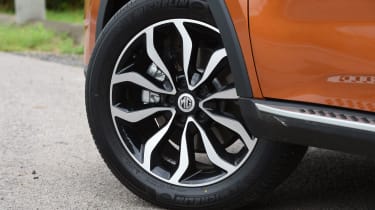 Keep to low revs and the engine is impressively quiet, and at motorway speeds it's almost inaudible. Wind and road noise are to be expected from a tall SUV like the MG, but both are pretty unobtrusive.

So compared to a 1.2-litre Qashqai, the GS's 1.5-litre unit is competitive. The problem is, the Nissan (like all of the other options in this class) is available with a diesel option, which is punchier, cheaper to run and almost as quiet. Even the Qashqai’s entry-level 1.2 manages over 55mpg. There are no plans for a diesel MG GS yet, either - so your only option is the 46.3mpg and 139g/km petrol.

Still, you'll be saving quite a bit of extra cash on the purchase price - so the sums might add up for some families. There's plenty of space in the back for the kids, with lots of leg and head room for the whole rear bench - although the hard middle seat is uncomfortable. 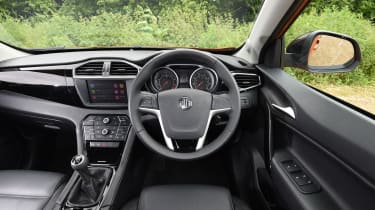 The seats fold down completely flat, and there's no loading lip, so the 335-litre boot is easy to use. It extends up to 1,336 litres with all the seats down, and there's a space-saver spare wheel under the floor - crucial for peace of mind on long trips. The Qashqai's 430-litre load bay is significantly bigger, though. In fact, even the smaller and cheaper SsangYong Tivoli manages a bigger boot than the MG, at 423 litres.

Interior build quality is good, with the dash and centre console feels well put together. The cheap-looking plastics are a setback, as is the uninteresting design, but our top-spec model's leather seats look and feel good. Touch points like the steering wheel and gearstick use higher-quality materials as well. It doesn't feel particularly premium inside, but with electric seats, DAB radio, climate control, a rear parking camera and an electronic parking brake it's not wanting for kit. 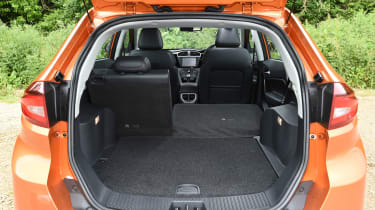 The MG is not the best looking car in its class, with the Mazda CX-5 and Renault Kadjar beating it on styling, but the GS's bulging bonnet, sleek light signature and flared arches giving it a relatively sporty look. The high shoulder line and tiny front grille do make it look a bit awkward from some angles, though.

The MG GS will mainly be bought on value for money, and that's definitely its strongest point - it even comes with a 5-year manufacturer warranty. If you're desperate for a good value crossover, the SsangYong Tivoli will probably be a better choice, though. It's not as big, nor is it as good to drive as the MG. However its punchy and efficient diesel, available at comparable prices to the MG's petrol, will be the biggest thorn in the MG's side.