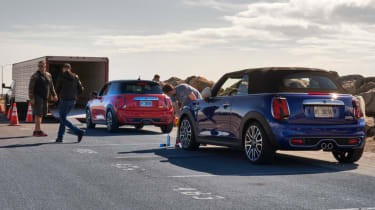 When a new car appears in the pages of Auto Express, it’s easy to take for granted the months of intense planning that have gone into creating, finalising and distributing the suite of high-definition images and assets to the world’s media.

Shooting a brand new model in broad daylight in some of the busiest places on the planet isn’t easy, after all. Subtlety is the name of the game, but remaining inconspicuous with an entourage of camera cars and security guards poses its own challenges.

You might think new cars are captured on a runway in front of a big green screen, but for authenticity, most brands want to place their latest models in situ. 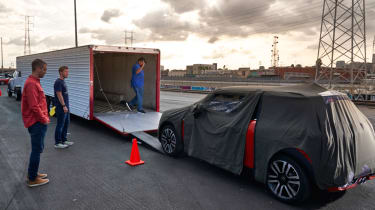 To see what goes into a complex event such as this, we joined MINI’s marketing team in Los Angeles late last year, to shoot the media and advertising images for the facelifted three-door hatch and Convertible.

We’re picked up from our hotel and after weaving through LA’s morning rush hour, we pull up alongside a precariously parked truck, down a relatively busy street in the centre of the city’s Chinatown district.

At first, there isn’t a MINI in sight, but out of the corner of our eye we spot a man in sunglasses and shorts clutching a walkie-talkie. With little more than a wink, the rear door of the truck lowers slowly to the ground and we catch a glimpse of two cars covered by a tarpaulin.

We’re told to amuse ourselves while the first is backed off the trailer. As the Convertible rolls on to the street, the only hint at the car’s secrecy is a set of stickers glued to the new Union flag-inspired rear light clusters. It’s the same story for the hatch.

To our amazement, the car is left standing on the side of the street for almost 10 minutes – with nothing more than those makeshift decals hiding its identity. MINI has enjoyed huge success in the US over the past decade, and perhaps that’s why so few people give the Convertible more than a second glance.

But as soon as we remove the tape, our security guard starts to get twitchy. There’s plenty of back-and-forth on the radios, too, especially when a passing car lingers at a stop sign for more than a second or two. 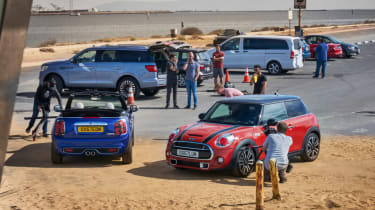 It’s at this point that we’re ushered into the back of a Ford Mustang. The photographers are using it as a tracking vehicle for the day; its undisputed popularity in the US ensures it blends in like a black cab in London. The various cars are used as incognito decoys, because following in multiple MINIs would draw far too much attention. It’s a simple but effective trick that allows us to go almost entirely under the radar.

After a few laps of the surrounding streets, we’ve got a selection of moving shots in the bag. Only now are the stickers replaced and the cars swapped.

Action pictures are one thing, but static shots are another matter entirely. For these, our snapper is keen to try a quieter area of the city down by the river; somewhere with better visibility and fewer onlookers.

The riverfront is far quieter than the city streets, but we still find ourselves getting some unwanted attention from a group of people in a Jeep Cherokee. Our man simply positions our Volkswagen Jetta in between the MINIs and the four-strong crowd, blocking the view from prying eyes. It doesn’t take long for the men to lose interest, and after 15 minutes the cars are taped up and back in the van, tucked away for the night. With two padlocks on the tailgate, it’s job done.

Despite the odd hiccup, it’s been fairly plain sailing, with little interruption. Granted, we’re only protecting a mild mid-life facelift, but by employing a few simple tricks we’ve gone almost completely undetected in one of the busiest cities in the world. 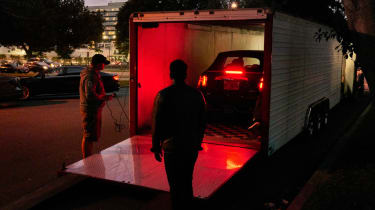 It makes you wonder why manufacturers go to such lengths to disguise their prototypes, using heavy camouflage, darkened windows and swirly paintjobs. By choosing a previously unused location and a single canny security guard, we manage to steer clear of the spy snapper’s long lens, too.

Enjoy looking behind the scenes at how the automotive industry works? Then why not take a read of our peak behind the curtain of Bentley's material department?