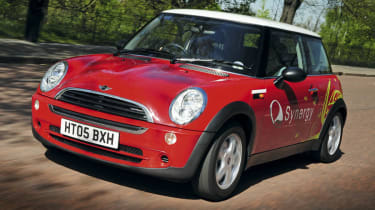 Anyone who thought electric cars had to be either mega-expensive or embarrassing to be seen in can think again. The Synergy E-drive offers all the practicality and driveability of a MINI with a fraction of the running costs and a low impact on the environment. The 70-90-mile range should be plenty for most commutes, while the torquey electric motor and single-speed gearbox make it easy to drive. It’s proof that the technology exists for a viable electric model – all we need now is for larger manufacturers to bring affordable cars like this to market.

The plug-in MINI is here – and Auto Express has driven it! With Government plans to offer grants of £5,000 towards the price of a battery-powered or hybrid car in the next few years, eco models like this are going to be hot property.

But there’s a problem. Current models such as the G-Wiz and Toyota Prius don’t qualify – instead, we’ll have to wait until 2011, when a new breed of electric cars goes on sale. Or will we?

We drove this Synergy E-drive version of the MINI, and although it’s a prototype – based on the MkI hatch – it’s very close to going on sale. The model isn’t to be confused with the official MINI E, and is an affordable, desirable and easy-to-use all-electric alternative to a petrol car. It’s engineered and built by London-based company Synergy Innovations. So does it make sense?

Four to six hours plugged into a normal mains supply is enough to completely charge the lithium-polymer battery pack. Depending on how vigorously you drive, that should deliver a range between 70 and 90 miles. According to Synergy, this will be plenty for a daily commute, which it claims is typically no more than 15-20 miles in total.

The electric motor produces 116bhp and 190Nm of torque, which is enough for 0-60mph in 10 seconds – only nine-tenths-of-a-second behind the petrol MINI Cooper – and a top speed of 95mph.

Twist the key, and the silence from the engine bay is eerie. Flick the switch to D, and a prod of the accelerator moves the car forward smoothly. With a single-speed gearbox and all that torque available from a standstill, the E-drive is easy to use in town, and it feels quicker than the figures suggest.

However, the 78 lithium-polymer cells make it around 100kg heavier than the standard model – and there’s no disguising that on the road. The car feels a little sluggish when changing direction and less responsive under braking, although those really are the only discernable differences.

Unlike the big-budget MINI E, which ditches the back seats and boot to make room for its batteries, the E-drive makes no such compromises, as the power pack is stowed under the boot floor. Inside, there’s a chunky central switch to select forward, reverse or park, and a large LCD screen on the dash which shows real-time performance data.

There’s full wireless broadband, too, as well as an ioPlay music player, which allows songs to be streamed wirelessly from your MP3 player to the stereo.

The whole package is very appealing, and that’s before considering the benefits on offer. Electric cars are exempt from road tax, while the E-drive costs only £1.50 per charge. That sort of saving means you could even afford to hire a conventionally powered vehicle for longer journeys at the weekend.

Right now, the E-drive is simply a showcase for Synergy’s talents. The firm’s aim is to encourage manufacturers to work with it to create their own fleets. A Dutch company has already asked for 20 examples to be built, and Synergy is lobbying organisations such as local councils to invest, too.

Electric cars are a hot topic at the moment, but those on sale are limited to tiny quadricycles or the £90,000 Tesla Roadster. Yet the E-drive works – and if Synergy can do it, what’s taking major makers so long? It’s exactly the shot in the arm the industry needs.

Watch a video of the E-drive in action here.

Rival: Mitsubishi i MiEV This electric city car should arrive in the UK in limited numbers later this summer. And as with the E-drive, it offers a range of around 100 miles from a single, six-hour charge of its lithium-ion batteries.