We get behind the wheel of the fastest MINI ever, the new 215bhp John Cooper Works GP II 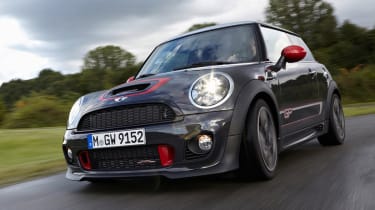 The MINI JCW GP is for those who value a pure driving experience. It’s certainly not practical or sensible, but it is huge amounts of fun and feels unlike almost anything else on the road. The near-£29,000 asking price makes sense when you’re behind the wheel and becomes even more palatable when you consider that good examples of the first-generation JCW GP are selling for around £15,000.

The MINI JCW GP II is the most track-focused production MINI you can buy, so it’s no surprise that it impressed us on a circuit. But how will this extreme two-seater fare during everyday road driving?

To recap, the GP II is a kind of last hurrah for the current-generation MINI Hatch, limited to 2,000 units and fitted with a load of race-inspired components. That includes a rear strut brace (in place of the rear seats), a brace underneath the bonnet, fully adjustable coilover suspension and some motorsport-style dampers.

The engine isn’t left untouched, either, with an extra 7bhp over the standard JCW taking the power output from the 1.6-litre turbo to 215bhp. That may only knock two-tenths off the standard car’s 0-62mph time – taking it to 6.3 seconds – but you only need to tackle a few corners to realise just how special the GP feels compared to a normal JCW.

The steering is just as quick but a whole lot more predictable, allowing you to make the most of the GP’s excellent chassis. It corners completely flat and grips far harder than the standard JCW thanks to a set of specially developed Kumho tyres.

An electronic differential on the front axle brakes the wheel with the least grip to help you through the bends, but there’s so much mechanical traction here that you really do need a race track to get the most out of it.

On a track you’ll be able to feel the effect of the GP’s aerodynamic kit, too, which includes a new rear diffuser and a large rear spoiler. At high speeds, it’ll reduce lift by as much as 90 per cent.

Amazingly, it doesn’t have the kind of jarring ride that blights the JCW, with a thunk over rough tarmac that’s more heard than it is felt. It’s undoubtedly firm but it’s absolutely conceivable that you could live with the JCW GP every day – although there is quite a bit of tyre noise above 40mph.

The brakes may take a bit of getting used to, as well, with the new, larger Brembo six-piston calipers proving to be a little more grabby at low speeds. They do work incredibly well, though, and they fit with the character of the GP, which often feels more racing car than it does road car.

In that sense there’s really not much else on the road like the GP. A Renaultsport Clio is fun but it doesn’t feel as highly tuned as the MINI, nor does it feel as premium in the cabin.

But the JCW GP II’s £28,790 price tag is considerably more than anything else in this class – and £6,355 more than a standard JCW – so it’s a very dedicated hot-hatch buyer that’s prepared to take the plunge. There’s always bound to be other options, too, like the excellent BMW M135i hatch, which costs £29,995.