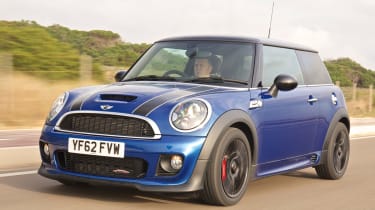 This latest MINI JCW isn’t much different, so buyers shouldn’t expect to be blown away by a completely new driving experience. Instead, it retains its fun and playful character, but now has more of an eye on economy and emissions. It’s just a shame the engine doesn’t sound as good as it did before.

The John Cooper Works model is no longer the king of the performance MINI range, with the arrival of the GP model. But a newly overhauled engine means it still has plenty to offer.

While the 1.6-litre turbo delivers the same 208bhp as before, it gets modifications including reinforced pistons, a variable valve control system similar to BMW’s Valvetronic set-up and a larger air intake. More importantly, it’s now also fitted with the MINImalism fuel-saving tweaks, like stop-start and brake energy regeneration.

As a result, the JCW hatch we’re driving is now a lot more efficient, with economy up from 39.8mpg to 42.8mpg and CO2 emissions cut from 165g/km to 153g/km. Sadly, the latter isn’t quite enough to drop the car down a tax band, so you’ll only really benefit at the pumps – and even then you won’t notice a massive difference.

It’s worth noting that the new engine can be had with an auto for the first time in the JCW. This adds two-tenths to the 0-62mph time, taking it to 6.7 seconds, and means 39.8mpg economy and 165g/km CO2 emissions.

On the road you’ll struggle to tell this engine apart from the previous one. MINI claims throttle response is sharper, but we didn’t notice this; the manual JCW was always quick to respond, and 0-62mph still takes 6.5 seconds.

It would be nice if MINI had addressed the car’s slightly unruly nature, though, because there’s still a lot of torque steer. The engine sounded more strained than before, too, particularly at the upper limits of the rev range. The previous deep growl makes way for a slightly rougher engine note that sounds a bit less tuned. However, in Sport mode there’s still a playful pop and crackle from the exhausts on the overrun.

As the changes don’t stretch beyond the engine bay, everything we love about the way the JCW handles is still there – as are all the things we don’t like. That means the pin-sharp handling and responsive, talkative steering are retained, but you also get the bone-shattering ride.

The MINI JCW is still huge fun and the lower running costs add to its appeal. But it’s expensive, at £22,455, especially as the superb standard Cooper S is £18,180.