We get behind the wheel of a pre-production version of the David Brown Automotive Mini Remastered to see what you get for £99,000

However you approach it, £99,000 is an exorbitant amount of money for a car that is dated, cramped and not all that fast. But that’s a very rational point of view. Irrationally, it’s a cute, characterful and hugely desirable take on a British icon. For its 25 future buyers, the Mini Remastered is the ultimate chic city car.

Rarely does a Mini need an introduction. Its image is gold plated and the story is legendary, but the car you see here does require some explanation.

This is the Mini Remastered. Built by David Brown Automotive, it’s a reinterpretation of the classic Mini and is the company’s second model. The first was the Jaguar XKR-based £500,000 Speedback GT – a four-seat GT designed to look like an Aston Martin DB5.

“Think of it as the ultimate coachbuilt Mini,” says founder David Brown. “It’s like the Wood & Pickett Minis of the 1960s. They looked homemade though – ours is built properly.” 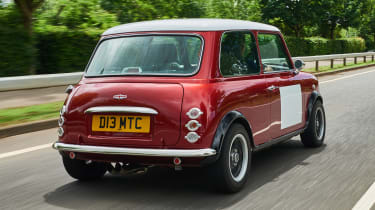 Those Wood & Pickett cars met the demand for ultra luxurious Minis, and the intention with the Mini Remastered is to be opulent while also meeting modern customers’ wishes.

So there’s a plush interior that features full leather upholstery (the hides are from Dorset-bred cows because the fields they roam in don’t have barbed wire), a totally new colour-coded dashboard, Alcantara headlining, climate control and a neat looking seven-inch Pioneer touchscreen with Apple CarPlay and Android Auto capability.

Each Remastered starts out as an original car. Its VIN plate is carried over but the company adds a brand new shell. It also de-seams the car and adds extra reinforcement; it takes 1,400 hours to turn a donor car into a Mini Remastered. 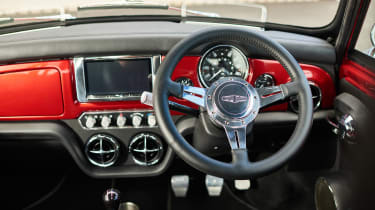 There’s a new Speedback-like grille, LED headlights, electric windows, a heated windscreen, and the new body is covered in up to 17 coats of paint. There’s even keyless go with a starter button located just in front of a cupholder – and plenty of knurled metal switches and stalks.

A refurbished engine is fitted – enlarged from 1,275cc to 1,330cc, delivering 94bhp and 118Nm of torque. Four-piston disc brakes feature on all four corners, while new suspension and a stop-start system have been added. The reconditioned gearbox still has four gears, however.

You can, of course, go for a totally bespoke version and have any colour or trim combination you like. But if that’s a bit bewildering there are two special editions; each limited to 25 cars. The retro Café Racer at £96,000 and the Inspired by Monte Carlo. 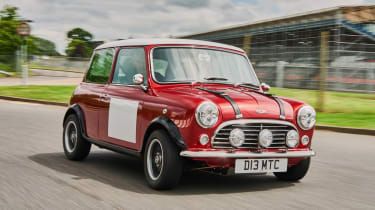 Push the starter button and the engine coaxes into life. The refurbished engine growls and in true 1960s style the gearbox whines, but put your foot down and you’ll notice a good slug of power low down in the rev range. The Remastered picks up speed quickly, but beyond 50mph the engine feels a bit overwrought. At 60mph it’s pulling around 3,500rpm and with just four gears it’s noisy – even with all the new sound deadening fitted in the car.

But if the Remastered were as refined as Volkswagen up! then Brown would have failed in his mission to improve the Mini’s ingredients without losing its character. Just like the original you drive along in a cartoon world looking at every other car in wide-vision. With suspension that is firm and has little travel, you bounce along like you’re on a pogo stick, the twin exhausts shouting out a raspy tune as you barrel down the road.

There’s no power steering but it’s beautifully precise – allowing the car to react just as you expect it to; the nose sticks to the apex and the rear follows perfectly. Suffice to say, David Brown has managed to add even more charisma to one of the most characterful cars ever made.