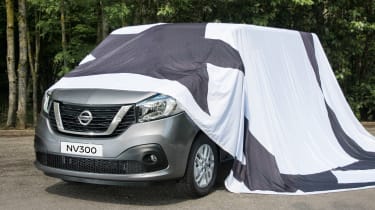 Nissan has previewed the latest addition to its lineup of commercial vehicles – the mid-sized NV300. Built in the same factory as the Renault Trafic, it will go on to share a crowded marketplace with the likes of the new Citroen Dispatch, Ford Transit Custom, Volkswagen Transporter, Mercedes Vito and Hyundai iLoad.

The firm hasn’t revealed many details about the new NV300, but it’s fair to assume that the van will benefit from Nissan’s alliance with Renault. Expect to see similar engines and bodywork to the Trafic making an appearance – items which are also shared with the Vauxhall Vivaro and upcoming Fiat Talento. Up front, though, the NV300 will use Nissan's 'V-Motion' grille - similar to the one on its passenger cars like the Qashqai and Juke.

The NV300 will replace the popular Primastar, which is getting slightly long in the tooth now. It will sit in between the smaller NV200 and full-sized NV400 in Nissan’s LCV range.

Nissan has promised the NV300 will benefit from the firm’s 5-year, 100,000 mile LCV warranty – which also extends to any official accessories you purchase with the van.

The Nissan NV300 will arrive in showrooms in the autumn, but more details - such as power and economy figures for the Euro6 diesel engines, load capacity and pricing - will be revealed at Hanover Motor Show in September.

Could the Nissan NV300 be the mid-sized panel van for you? Let us know in the comments below...