Could the electric car lifestyle fit with yours? 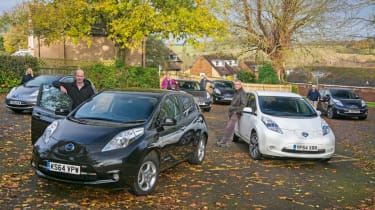 Whitwell in Hertfordshire is a normal Home Counties village. It has a pub, a post office and a tiny primary school to serve the 900-odd inhabitants. Many of them commute to nearby towns such as St Albans, Hitchin and Stevenage or catch the train to London, about 30 miles to the south.

Previously it has been most noteworthy for its watercress farm. But now there is a new type of Leaf which is sprouting up all over Whitwell, and it’s an electric car.

Stand on the High Street and it won’t be long before one passes by. There are at least six of Nissan’s electric cars in the village, plus a couple in neighbouring hamlets which pass through twice a day. As well as the Leafs, there are a couple of BMW i3s and Mitsubishi Outlander PHEVs.

Why has the village turned green? It’s all down to word of mouth. Owners love their Leafs and they tell friends and neighbours. Once they see how electric motoring works for them, word spreads and more Leafs start to pop up. 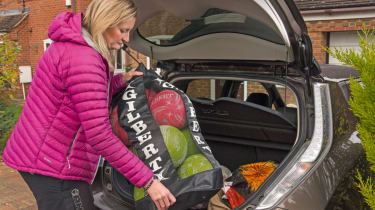 Radiographer and netball coach Melanie Mansfield was one of the first motorists in Whitwell to go electric. She explains: “One of our friends worked for Nissan and got a Leaf as a company car in 2011. It seemed a bit of an oddity at the time, but we had a good look around and went for a ride. Then a charge point popped up at my work and we realised that an electric car could work for us.

“We bought our first Leaf in 2014 and loved it,” she adds. “Then the PCP ran out, so we upgraded to a new 30kW model last year. It’s even better – so quiet and relaxing to drive, and it saves us a fortune in fuel.”

Mel’s favourite gadget on her Leaf is the preheating, which lets her put the heater on from an app or in-car timer so it is defrosted and warm while still plugged into the mains. “We had our first proper frost yesterday and I was pretty smug going out to a toasty warm car instead of reaching for the ice scraper,” she says. 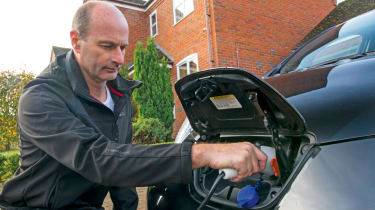 Across the road live the Mallett-Smiths. When their previous car went to the crusher with 190,000 miles on the clock, they were looking for a car which could cope with a 60-mile round trip daily commute.

They didn’t have to look far for inspiration. Andy says: “We’d been speaking to Mel and a couple of the other Leaf owners in the village and knew that they were quite evangelical about their cars. So we started looking around and found our own very-low mileage car at the local dealer. The price we paid for it meant that we were spending less on finance than we were on fuel in our old car.

“We’ve had the Leaf over a year now, done nearly 17,000 miles and the only issue that we’ve had with it during that time has been a puncture,” Andy adds. “We’d never go back to a petrol or diesel-powered car again.” 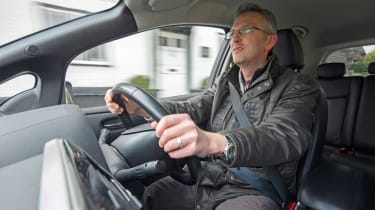 The next Whitwell Leaf belongs to the Adsheads. Phil originally got his 2014 Tekna as a company car, but then bought it from the leasing firm when it came to renew.

He explains: “When I was looking for a company car a few years ago, electric cars were exempt from Benefit In Kind tax. Having a Leaf saved me hundreds of pounds a month compared to a diesel. When the time came to renew my car, the Government had slapped a five per cent BIK rating on them, so it didn’t make sense to get another. So I bought the car and took an allowance from my employer.”

A few hundred yards away is another house where there’s a car charger on the drive, but a Qashqai, not a Leaf. It turns out the owner traded in her EV when she bought a trailer tent: the Leaf isn’t available with a towbar. 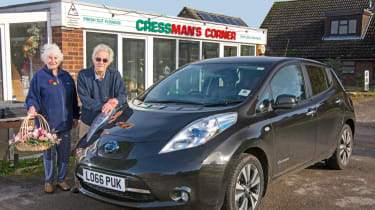 Down the road is a farm shop and florist owned by Pat and Ivor Sansom. In front of their solar-panel clad garage is a year-old 30kW Tekna Leaf charging from the sunshine.

“We invested some of our savings in solar panels a few years ago, as it seemed to give us a better return than the bank,” explains Ivor. “It’s much better to use the power generated by your panels rather than feed them back into the grid – we get 55p for each kilowatt we produce as a subsidy, but only 0.7p more if we feed it into the grid. So, we try and use the power we produce.

“We noticed some of our customers coming by in these electric cars and decided we’d better learn about them. We bought an ex-demo 30kW Tekna last year and now charge it during the day when the panels are working hardest. It means we get about £16.50 in a rebate each time we fill our car with free fuel!” 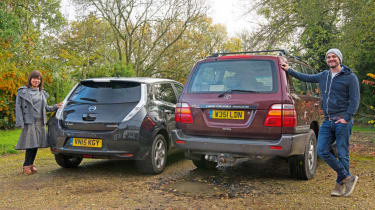 Further along the High Street we find Lisa Yates and her grey 2015 Acenta model. She says: “My husband had a Leaf for a few years as a company car, and we soon realised how much we were saving in fuel.

“We thought it would be our second car, but it was nice to drive and cheap to run, so we ended up using it all of the time, except for the longest journeys. We even went camping in it, using a fast charger at a Nissan dealer on the way and plugging in at the campsite!

“He changed jobs and the Leaf went, but we missed it. When one of our sons got a place at a secondary school nearly 10 miles away, we realised that it might make sense to go electric again,” Lisa adds.

“The local dealer had a deal which meant we traded in our old car and got an 18-month old Leaf on 0% HP with free servicing for two years. The monthly repayments are less than we used to pay for petrol and tax previously.”

That school run introduced our final Whitwell Leaf family to electric motoring. Alex and Pee Alden share lifts with Lisa and were worried that their old car might not be up to the constant use. Their other car, a Toyota Land Cruiser Amazon, is a bit heavy on fuel, they explain.

Alex says: “Lisa’s son and our daughter go to school in one Leaf and come back in another, so travelling around in electric cars isn’t a novelty to them.

“The Toyota hardly gets used these days; ironically, we have to charge its battery sometimes,” Alex adds. “Since getting the Leaf, we only fire it up when it snows, we need seven seats or to travel a long distance.”

The lack of exhaust fumes is welcome in the green Hertfordshire countryside, but the Leafs also produce no sound – which can actually be an issue.

Lisa explains: “The Leaf is great when you are inside because there’s no engine noise, but it can catch people on the outside unawares. Our village is on the Chiltern Cycleway and people on bikes sometimes just don’t hear you. I’ve learned to be very careful when overtaking cyclists, because there have been a few close calls.”

Lisa is also the only owner who has made any sort of modification to her Leaf, changing all of her tyres for Michelin CrossClimates. “The standard tyres are OK in summer, but the traction control light was always flashing in winter,” she says. In an electric car the power is there as soon as you put your foot down, so they need some decent grip. They’re not Eco tyres, so probably knock a few miles off the range, but I’ve not really noticed.” 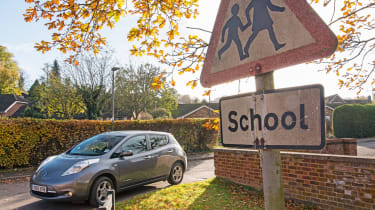 Despite the number of Leafs, the village doesn’t have a public charger. “Most of us don’t really need one,” says Andy Mallett-Smith. “We all charge at home or at work, so we have somewhere to charge when we are here. It’s only when we are out and about that it’s good to top up.”

Some of the other residents in Whitwell are keen to go electric, too, but can’t because they don’t have off-street parking. It seems to be the biggest barrier to EV ownership across Britain, and one that will surely change over the next few years as more chargers are rolled out.

“But we do worry a bit,” said Mel Mansfield. “If there are any more Leafs in the village, the lights might go dim if we all plugged in at the same time.”

What are your thoughts on the increase in EV sales? Let us know in the comments below...