Does Nissan's newcomer the Leaf top of the electric car tree? 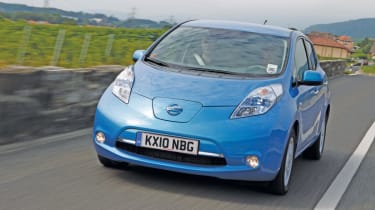 The Leaf goes on sale to coincide with the Government’s £5,000 electric car grant, and incurs VAT at 20 per cent – both of which are factored into the £23,990 price. While the charging infrastructure is still poor, with a claimed 100-mile range, this is the most practical electric car yet. It’s not perfect – it takes eight hours to recharge, is much pricier than the average diesel family hatch and isn’t much fun to drive. But it works, and bodes well for the future of electric cars.

Before Volkswagen’s battery-powered Golf arrives, Nissan will start selling its Leaf. When it goes on sale in February, it will be the world’s first mass-produced electric hatch. Order books are open now, so it’s close to fruition.

Following a drive in Japan, we caught up with the Leaf on European roads. And it’s shaping up well. The Leaf is a striking car in the flesh, with its elongated nose and peculiar headlamps. The interior is airy, with space for five adults and luggage.

Its 250kg lithium-ion battery pack is carried under the rear seats and floor. Minus points include cheap-looking plastic trim, plus a slightly awkward driving position.

The digital dashboard can be difficult to read, and manoeuvring is not quite silent, as Nissan has deliberately given the car a low-speed rumble as a warning to pedestrians. At higher speeds, the Leaf emits only a faint jet-engine whine.

The car’s range is quoted at 100 miles, although the maker admits that enthusiastic use of the accelerator, running at high speeds and blasting the air-conditioning in hot temperatures will drag this down to as low as 70 miles.

From the off, it’s clear that the Leaf has more than adequate performance around town. And while it tips the scales at 1.6 tonnes, it is light and agile at low speeds, although the over-assisted steering feels slightly odd.

The top speed is 90mph, while the benchmark sprint from 0-60mph takes about 12 seconds. The Leaf is a strong performer, more than capable of holding its own on the motorway, which isn’t always the case with its single-speed electric rivals.

In corners, there’s limited roll, although the Bridgestone eco tyres can squeal in protest. Attempts at spirited driving are discouraged by the numb steering, while the enhanced regenerating braking effect, which can be dialled in via the central gearknob, is fiddly and intermittent.

On smooth roads, however, the Leaf’s ride is comfortable and the brakes are strong and progressive. It all adds up to being the most viable electric family car yet.

Rival: Mitsubishi i-MiEV At around £25,000, the battery-electric four-seater looks expensive. Its claimed 80-mile range is optimistic, and still too short, while there’s not enough power from its 16kWh lithium-ion battery, either.