The Nissan Navara was one of the most popular 4x4 double-cab pick-ups on the market, with a wide range and strong performance 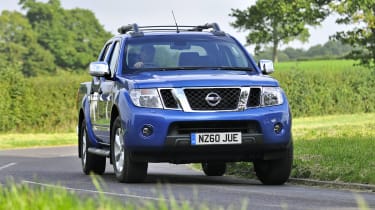 Despite having been on sale for some years, the Nissan Navara was a popular pick-up. The Mk2 version arrived in 2005 and remained on sale for a decade before being replaced by the current Navara. There was no single-cab option with an extra-long load bed, but there was a king cab with occasional back seats and the familiar double cab option, while the Navara was a more premium choice than rivals of the time such as the Ford Ranger and the Toyota Hilux.

The Nissan Navara had an SUV counterpart called the Nissan Pathfinder Mk3, although the Navara was on sale for two years longer. Both cars were fantastic to drive off-road thanks to the four-wheel drive system, including a low range set of gear ratios for when it gets really tough. Hit the road, in two-wheel drive mode, and the Navara feels brisk. But if you head for the corners it shows its weakness: poor handling. If you take the motorway, things get worse with the loud, intrusive mechanical and road noise.

The Navara was updated in 2012 with a new bumper and grille that makes it more aerodynamic and gives a more corporate look. Whichever version you go for, the load area is huge and the double-cab means you can comfortably fit three adults in the rear row. The roomy interior comes with a load of storage spaces too.

The Nissan Navara was available in three different specs. The lower specification Visia model is suitable as a work vehicle . It comes with 17” alloys and a 2.5 dCi Manual engine. The Navara Tekna shares the Visia’s alloys and diesel engine but adds chrome touches, leather upholstery, rear privacy glass and roof rails. The Navara Outlaw V6 was expensive new, but boasted a 3.0 V6 dCi diesel and auto gearbox, as well as 18” alloys and an electric sunroof.

Nissan claims up to 33.6mpg in fuel economy for the 190bhp engine with a manual gearbox, rising slightly to 34.5mpg in the reduced power 144bhp Visia model, although few customers will see much above 30mpg in normal use. The five-speed automatic transmission available with the 190bhp engine drops the combined figure to 31.8mpg. The big surprise is the 231bhp V6-engined Outlaw model, that comes with a seven-speed automatic box fitted as standard. Nissan claims an entirely achievable 29.7mpg. Expect all models to drop to mid-20s consumption when towing, though.

Nissan Navara servicing costs are also higher than rivals like the Volkswagen Amarok. But, in terms of spec, it offers pretty good value for money.

The Navara is only available with an extended king cab that has a small internal space and occasional-use jump seats behind the front seats, or as a full double-cab pick-up with a second row of seating that will fit three adults comfortably. There's no option of a two-seat single cab in the range, and, likewise, there's no 4x2 version, but all models have four-wheel drive. This means that there's no option for a full-length pick-up bed behind the Navara’s cab, either.

The load bed length is 1,511mm in the double cab or 1,861mm in the king-cab model, compared to 2,305mm for Isuzu’s single-cab D-Max or 2,317mm for Ford’s regular-cab Ranger. The single-cab Toyota Hilux has a load length of 2,340mm. All Navara models can carry well in excess of 1 tonne, as much as 1,250kg in double-cabs, allowing VAT-registered customers to claim back on the purchase price.

Nissan offers a variety of load bed covers and hardtops through its dealers. The tailgate locks on the Navara, providing additional security when a hardtop is fitted. All models above the basic Visia come as standard with Nissan’s clever C-channel tie-down system, which has channels bolted into the floor and sides of the truck bed, with moveable tie-down eyes that lock into the channel, allowing customers to securely fix loads whatever the shape or size. A bed divider is available as an option, which locks into the C-channels, in effect creating two separate load areas. Roof rails are standard on all double-cab models, other than the base Navara Visia.

All Navara models come with an electronic stability programme (ESP) as standard, along with ABS brakes with electronic brakeforce distribution (EBD) and brake assist. Inside the cab, front driver and passenger airbags are standard on all models, with all trim levels above Visia also benefitting from side and curtain airbags. That said, the Navara only achieved a three-star Euro NCAP rating in 2008 when the Mitsubishi L200 scored four stars in the same year.

There are two ISOFIX child seat anchor points in the rear of the double-cab models for those customers using the truck as a work vehicle in the week and as family transport at the weekend.

The Navara is a relatively sturdy truck, but there are issues to look out for. Some Nissan D22 owners experienced problems with the engines blowing after the bearings, which weren’t strong enough, wore out. More recently, there have been reports of rear-axle half shafts having to be replaced, particularly where owners have been towing.

Of more concern are reports that the body can become separated from the chassis as the welds corrode over time. If you're looking to buy a Navara Mk2 second-hand, it's well worth getting an under-body inspection to check everything is in order.

The Navara drives very well indeed, a Nissan strong point. A commanding driving position, well-appointed cab, good visibility and powerful engines result in relaxed cruising with manual or automatic gearboxes. The V6 Outlaw in particular, has more than enough power, especially when towing. And when it comes to four-wheel drive off-road, it really comes into its own thanks to a low range set of gear ratios.

The Navara has always felt like a big truck, though it's no longer the largest on the road; both the Ford Ranger and the Volkswagen Amarok feel even bigger in urban surroundings. The Nissan doesn’t suffer from the wet roundabout handling issues often associated with empty pick-ups. It feels secure and can be pushed along without worrying about the rear wheels losing traction. The ride is relatively relaxed, too, without the unladen bounciness found in the Hilux or the Mitsubishi L200.

On the road and in two-wheel drive, the Nissan Navara feels brisk but will handle poorly when you reach corners. On the motorway the intrusive mechanical and road noise makes it an unpleasant drive.

Nissan added the Visia specification to the Navara range in an attempt to appeal to the utility-working truck end of the market. However, even the Visia gets air-conditioning, electric door mirrors and windows, plus Bluetooth mobile phone connectivity.

Over the years, owners told us in our Driver Power Survey that the Navara's interior provides as much comfort as higher brand cars, the driving position is comfortable and the truck has proved reliable.