The new Peugeot 208 has arrived to shake up the supermini sector, but does it have the tools to dethrone the Ford Fiesta?

With a string of recent success stories in the shape of the 3008 and 508, Peugeot faces high expectations for the new 208, and on many levels it succeeds. The design, inside and out, is outstanding and the quality of the interior is impressive. It’s just a shame then, that the driving experience is just a bit too unremarkable. That said, the 208 does have its own charm and more than holds its own in a crowded supermini sector.

The new Peugeot 208 may be a small, five-door hatchback but it’s rather a big deal. The expectations are high and not just because the competition is so good. The new Renault Clio, arriving imminently in UK showrooms, does much of what the 208 promises to do; there’s the badge appeal of the Volkswagen Polo, and the all-round brilliance of the market leader, the Ford Fiesta.

No, the expectations are high because of Peugeot’s recent success rate. The 3008 SUV, launched three years ago, can be marked out as the car that began the French firm’s renaissance. It showed that Peugeot had turned its back on making ugly, flimsy and disappointing cars, and instead had embraced design, quality and desirability. The 208, however, is different. Small cars are Peugeot’s bread and butter and the 208 is the linchpin in Peugeot’s rejuvenation. Essentially, if Peugeot has got it right again, the brand really has come of age.

We drove a prototype 208 back in July and thought it showed promise, but now comes the chance to drive the car you can actually go and buy. And the good news is that Peugeot hasn’t only managed to distill the 3008’s ingredients down into a smaller package; it has also succeeded in giving the little 208 enough charm of its own to stand out in the tough supermini sector. 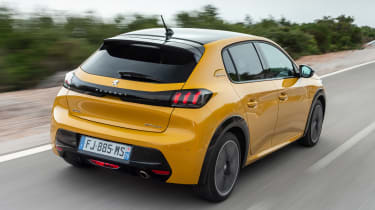 It certainly looks like no other supermini, that’s for sure. The slightly dumpy proportions of the car’s three predecessors have gone for good, and have been replaced by a more balanced design. There’s a bold face with Peugeot’s latest grille design, sleek headlights and vertical LED day-running lights, short overhangs, a rounded rear and a C-pillar that’s pure 205.

There’s nothing backward looking underneath the body, though. Along with the new Vauxhall Corsa, the 208 sits on PSA Group’s new small car platform, called CMP. It’s been designed from the outset to offer different powertrains, so that means the 208 (and also the Corsa) can come with a petrol engine, a diesel engine or as a pure-electric vehicle. Options include a 1.2-litre three-cylinder turbocharged petrol with either 75bhp, 99bhp and 128bhp, a 1.5-litre diesel with 99bhp or a 134bhp EV version.

Called e-208, the full-electric offers a WLTP-tested range of 211 miles and its packaging is all but identical to the equivalent petrol or diesel 208, thanks to that CMP platform. The electric motor sits under the bonnet, while the 50kWh battery pack lies under the rear seats. The interior remains the same, too. And that’s good news, because as the 208’s cabin is probably the car’s standout feature. 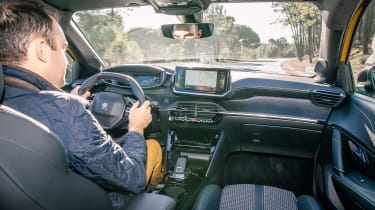 Apart from a smattering of hard plastics across the doors and glovebox lid, and acres of piano black plastic that’ll scratch within months, there are plenty of soft-touch materials across the dashboard and it feels really well put together. There are lots of nice design details too, like contrast stitching (lime green in our test car) and configurable ambient lighting, and the whole design makes most of its rivals look like they’re from the previous century. Space inside is no better than adequate, though, as six-footers will be a little tight in the back and the boot is just average for the class, at 311 litres.

Average doesn’t describe the technology, however, as the 208 debuts Peugeot’s new generation of its i-Cockpit. The entry-level Active gets the standard screen like on a 3008, but mid-spec Allure models and above get a 3D look to the driver’s screen. It works rather well and on the move you find your eyes don’t have to adjust as much as they do with the regular i-Cockpit. A seven-inch screen sits in the middle of the dash, which can be upgraded to a 10-inch for £660 (standard on the e-208). It’s as fiddly to use as before though, and nowhere near as simple to operate as the systems in the Fiesta, Ibiza and Polo.

For now there are just four trim levels, with petrol, diesel and electric offered across all models, apart from the range-topping GT, which only comes on the e-208. Active starts at £16,250 (£25,050 for e-208 Active, after the Government grant) and gets 16-inch alloys, air conditioning, Apple CarPlay and Android Auto, rear parking sensors and the i-Cockpit. 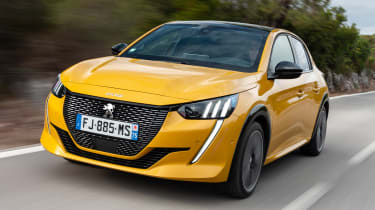 Get behind the wheel and you quickly realise that the wow factor of the exterior design and interior quality haven’t quite translated to the driving experience. It’s by no means bad, but the way the 208 goes, stops and steers can’t match the rest of the package.

Where the car drops the ball is in the little things that make you realise just how polished the Ford Fiesta is. The steering is desperately short on feel, for instance, and feels a little too light; couple this with the small steering wheel and it’s hard to know where the front wheels are pointing sometimes. Visibility over the shoulder and out of the back is a little restricted, too. That’s a bugbear around town.

The 128bhp 1.2-litre three-pot engine is a gem, however. There’s very little low-down turbo lag, it has a real fizz to the way it spins up to the red line, and, unlike in the old 208, the motor doesn’t make itself heard too much. The same goes for the eight-speed automatic gearbox that changes gears pretty much silently (the six-speed manual feels a bit too rubbery).

In fact, the 208 is a remarkably refined car to drive along quickly, with hardly any wind or tyre noise. The ride is pretty good too, as it does a rather good job at being comfortable most of the time. At low speeds around town it can get a bit jarring, but on the whole it’s soft and compliant.

The new 208 is a sizeable leap on from its predecessor, and while we reckon the Ford Fiesta won’t be losing its number one spot in the sales charts anytime soon, Peugeot’s new offering does have its merits. While the driving experience is pretty unremarkable, the design and quality of the interior gives the 208 a likeable charm - so it could well be another winner for Peugeot.