Does the all-new Peugeot 3008 crossover impress us as much in the UK as it did abroad? 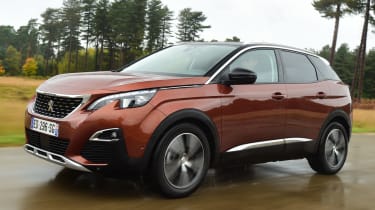 In the transition from MPV to SUV, the 3008 has doubled its desirability while losing little in the way of practicality or versatility. It’s beautifully built, with a stylish, innovative and intuitive dashboard design – yet on the road it feels solid, supple and refined. With a more modest diesel engine, we predict it could get a five-star rating. Peugeot has surpassed many of its mainstream rivals with its first attempt at a mid-size SUV.

It’s easy to lose track each time a new SUV hits the market. Nearly every maker now has some sort of 4x4 or crossover in its range, all following the same formula of a raised ride height and bulky bodywork.

But the Peugeot 3008 is different. Back in 2009 the car was more five-seat MPV than full-on SUV. Crossovers were still in their infancy, and the Nissan Qashqai had only just arrived, with models like the SEAT Ateca and Renault Kadjar a distant dream.

Nearly eight years later, the 3008 has been totally reinvented. So much so that Peugeot is referring to the new car as the 3008 ‘SUV’, in an attempt to distance it from the original model. We’ve now got the car in the UK to see if it can offer style and substance in equal measure. 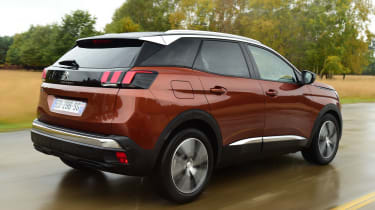 It certainly looks different. Peugeot design chief Gilles Vidal started from scratch with the new car – and it’s the same inside, where a concerted effort has been made to ensure the 3008 is simple to use and stylish.

The new car debuts Peugeot’s second-generation i-Cockpit dashboard. It uses the familiar small steering wheel, which the driver looks over rather than through to view the dials. It’s supposed to improve safety by placing them in your line of sight, and is a big step on from the set-up in the 308. The standard digital screen is customisable, too, and can show everything from speed and sat-nav to media and trip information.

The infotainment system has been heavily revised, and the fiddly 308-sourced touchscreen is accompanied by a row of piano-style buttons, allowing easier access to the climate controls and phone menu. The screen is more responsive, with high-quality graphics and MirrorLink and Apple CarPlay as standard. Elsewhere, quality is excellent. It makes the well built Ateca look plain, while a Qashqai feels cheap in comparison. The mix of materials contrasts nicely, with soft plastics on top of the dash and glossy metals and fabrics lower down.

Practicality is good, with plenty of space in the back for adults to sit three abreast. The 3008 is longer than a Qashqai and offers loads of legroom, while the 591-litre boot eclipses the Nissan’s 430-litre load bay.

But while style and practicality are key for many buyers, how the car drives is equally important. The good news is that few will feel short-changed. Even those who’ve driven the new Ateca, which lays claim as the dynamic class benchmark, will find the 3008 a fun and capable family car. While the petrol engine sampled here won’t be the most popular choice, it offered a good idea of how the rest of the range will perform on UK roads.

Aside from being left-hand drive, this 3008 is exactly the same as the cars that will arrive in showrooms next month. It’s agile around town, with the dinky steering wheel and tight turning circle making it easy to manoeuvre. The small rear window makes reversing a bit tricky, but only the entry Active model doesn’t have a reversing camera, so few buyers should find this a problem.

The ride impressed, too. It softens speed bumps well, yet never feels loose or ungainly the faster you go. Out on the open road the 3008 will cruise quietly at 70mph, and – in this powerful petrol model at least – has no trouble keeping up with faster traffic. This version doesn’t have much torque, however, and we expect the more modest diesel to be better. 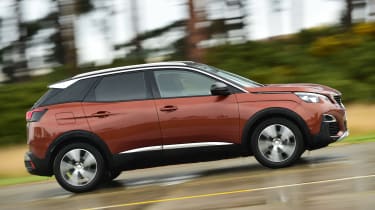 Our car came with a Sport button on the centre console, which tightened the steering and adjusted the gear ratios. As a result, the 3008 feels pretty agile, showing a willingness to change direction that is missing on many rivals. There’s a decent amount of feel to the steering, and not much body roll to speak of. A SEAT Ateca remains slightly more composed overall, however.

The Peugeot’s biggest downfall is its starting price, though. At £21,795 for an entry-level 1.2 Active, the 3008 is almost £4,000 more than the SEAT, which costs from £17,995. There’s no basic Access model, but that allows Peugeot to offer kit like the digital i-Cockpit dials across the range. In fact, this Allure sits on par with an Ateca Xcellence.

PCP deals haven’t been announced, but residual values are expected to be good and offers like Peugeot’s ‘Just Add Fuel’ should keep ownership costs low. A five-star Euro NCAP rating is the icing on the cake.