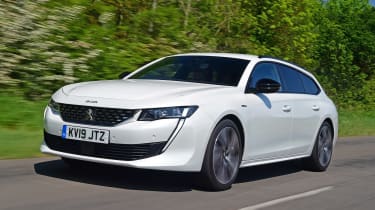 It isn’t the biggest estate car on the market, but the latest Peugeot 508 SW is still a fantastically practical family model. The sloping roofline hides a deceptively versatile body, with a flexible and spacious interior trimmed in some of the finest materials on the market. It’s a safe and predictable car to drive, yet a strong equipment list and low running costs count in this model’s favour. That it’s simply dripping with contemporary French ‘je ne sais quoi’ is the icing on the cake.

When we drove the all-new Peugeot 508 SW late last year we declared it a car you should buy with your heart rather than your head. Despite its bona fide estate car credentials, its rivals are bigger and more practical.

But does that statement ring true after spending a week driving one on UK roads? To see if there’s more to the latest 508 SW than a swooping roofline and some flash leather trim, we’ve put the popular BlueHDi 130 to the test in big-selling GT Line trim.

First things first; an estate car must be spacious. And, of course, there’s a benchmark here against which all others should be measured. In the 508 SW’s case, it’s the fantastic Skoda Superb Estate. Not only is this a fine wagon, it’s also the biggest car in this class bar none. In fact, its 660-litre boot is 130 litres larger than the Peugeot’s, and 170 bigger with the seats folded flat. However, it’s not all doom and gloom for the 508; thanks to the Peugeot’s wide tailgate and long wheelbase, we managed to fit a full-size road bike in the back without removing either of the wheels. 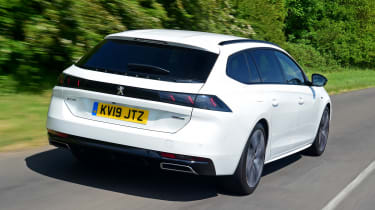 Space in the back seats is generous, too, with plenty of headroom for tall adults. So in spite of that low roofline, the SW is an incredibly versatile family car. It’s comfortable, too, with a typically French pliancy to the ride – even on our model’s optional 19-inch wheels. Few rivals in this class can claim that on such large rims.

Even better news is that the plush ride doesn’t have an adverse affect on handling. The 508 isn’t as sharp as a BMW 3 Series Touring, but its predictable, neutral balance means it’s easy and relaxing to drive. It’s quiet at a cruise, with the fantastic eight-speed auto and entry-level diesel proving an excellent combination on the motorway.

The smaller steering wheel, which works well in Peugeot’s dinky 208 and 308, feels slightly out of place in such a large car, but it gives the SW a darty feel and an agility that’s missing in the outgoing version. The steering is light, however, and doesn’t offer much feel, while the short gearbox paddles are mounted on the column, meaning they are frequently out of reach. At times, this can be frustrating – especially when you up the pace.

Yet with a few caveats, the 508 SW ticks both the driving and practicality boxes. So how does it fare for running costs? This model will be purchased primarily by fleet buyers, so tax and fuel economy are prime concerns. Thankfully, our version’s low emissions make it an affordable company car; putting out only 104g/km of CO2 gives it a Benefit-in-Kind rating of 28 per cent – three per cent lower than an equivalent Superb, and six points better off than the (manual-only) Ford Mondeo TDCi 150PS. Economy is good, too, with our car returning close to Peugeot’s claim over a 200-mile mixed test route. 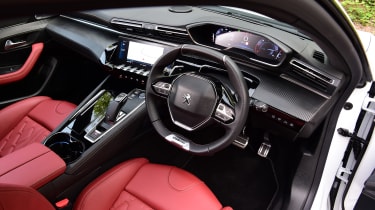 GT Line is expected to be a big seller in the range, and a glance at the spec sheet shows why. Quality is really very strong, and the cabin design is ultra modern. The piano-key shortcut buttons work well, but it’s a shame that Peugeot persists with climate controls you can access only via the touchscreen.

Basic Active cars get an eight-inch display with sat-nav, Apple CarPlay, Android Auto and DAB, while Allure steps up to a 10-inch screen with a colour reversing camera. For an extra £20 per month on a PCP finance deal, the GT Line gets bigger wheels, full LED lights, tinted windows and wireless phone charging. GT and First Edition add an extra layer of luxury, but you’ll pay for the privilege; prices start at £38,020 and £40,819 respectively.