The new Porsche 911 GT3 is a masterpiece, but there's also a manual version and it's arguably even better 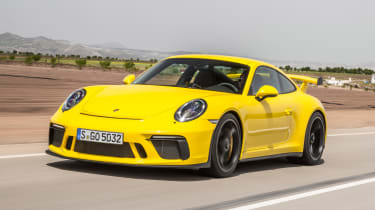 We’ve unequivocal praise for the Porsche 911 GT3. The PDK car is a treat, but easier isn’t always better. This manual takes everything that is great about the auto and throws an extra dose of engagement into the mix. In the increasingly homogenised world of performance driving, sometimes the fastest isn’t always the best. Take a bow Porsche, this six-speed GT3 is the best 911 on sale today.

We've already driven the new Porsche 911 GT3. As well as being the fastest and most powerful GT3 to date, we also declared this latest version to be the best.

Thing is, there are now two GT3s. Porsche has back-pedalled on the decision it made with this car’s predecessor, where the technical specification saw Porsche’s GT Department specify it only with a PDK seven-speed automatic transmission. It is now offered with a manual gearbox; the protestations from the purists were obviously heard in Weissach, then.

Technically it’s a backwards step. A manual transmission in a modern-day supercar is like listening to vinyl on a record player, or taking a film photo in a digital world. It’s not as easy to drive as the PDK – but that’s part of its appeal. 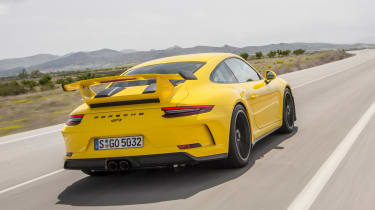 You’ll forgive the manual GT3 for the half-second it loses over the PDK’s 3.4-second 0-62mph time, because you’ll be having too much fun to care. The GT3’s always been a visceral, engaging car, and this one’s no different. Indeed, it’s the very best of its type.

The six-speed manual only adds to that, even if numerically it detracts from the GT3’s ridiculous performance. But the shift quality is so sublime, the pedal spacing and weighting of the controls so finely judged, that every gearshift is an absolute joy. And however impressive the PDK is, that’s crucial.

Any fears that the ferocity of the engine’s performance or the immediacy of the car’s responses might overwhelm that manual gearbox, simply don’t materialise. The shift is so quick and accurate, which when you’ve got an engine that’s as happy to rev to its 9,000rpm redline as the GT3’s, is a very good thing indeed.

The manual loses some of the PDK car’s more technically advanced equipment, though. It’s fitted with a mechanical differential and Porsche Torque Vectoring (instead of Torque Vectoring+) but you’ll be hard-pushed to notice. It’s 17kg lighter, which in Porsche circles is always seen as a good thing. 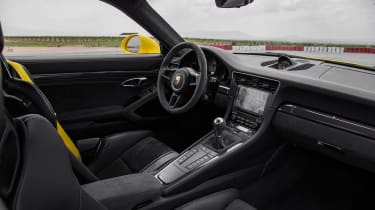 Dynamically then, it differs in no way – except the ability to influence things by your gear choice and the use of the clutch. It rides well, steers with unerring precision, and delivers sensation and control that’s so rare in high performance cars these days. The GT3’s specification might be gloriously old-school, but it doesn’t feel like you’re taking a history lesson in it.

Instead it feels utterly relevant. The mating of the manual transmission to the screaming, race-derived 4.0-lltre flat-six unit is achieved beautifully – operating with all the cohesive, immersive mastery that the rest of the car exhibits. The GT3 with PDK has character and charm in spades, but this one’s even more hilarious, and the best driver’s car we’ve driven in a long time.