The V8 is gone, we find out what the Porsche Panamera S is like with its new twin-turbo V6 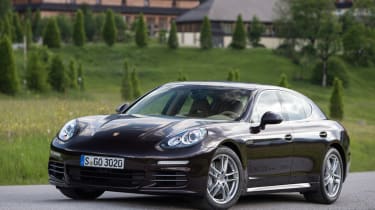 While we might bemoan the lack of a throaty V8 rumble, the new V6 engine in the Panamera ticks all the right boxes. It improves the performance and balance of the car, which remains the best blend of luxury and performance for the money. However, we prefer the hybrid model for a few grand more, or the diesel for £20,000 less.

Porsche isn’t immune from the downsizing craze (as the forthcoming Macan compact SUV will prove). But there’s something about a shift from V8 to V6 power that might leave a lump in enthusiasts’ throats – should we really be worried?

At the same time, fuel economy goes up by 18 per cent with CO2 emissions going in the opposite direction by a similar amount. So it’s all good?

Well, the new V6 is certainly punchy enough with a decent, strong stream of power. But despite Porsche’s claims of a more linear power delivery, it doesn’t seem to have quite the instant throttle response of the old V8. Nor does it have the beefy sound.

Don’t get us wrong, it’ll still bring a smile to your face, but it’s now more of a cheetah’s wail than a lion’s roar. Should that make you think twice about a Panamera?

Absolutely not – it still errs more towards sports car than luxury limo, although chassis tweaks have made it much more comfortable over bumps. It also feels slightly sharper to drive, benefiting from losing the weight of a couple of cylinders up front, and the V6 using the same 90 degree V angle as the V8 to keep the centre of gravity low.

We drove the two-wheel-drive S rather than the four-wheel-drive 4S, yet grip levels are high and the car will change direction sharply and flow from bend to bend beautifully.

Porsche’s PDK double-clutch auto can be a bit hesitant in auto mode – best to leave it in manual, and use the beautifully crafted paddles. It’s still no 911 to drive – but then try and carry a couple of adults in the back of a 911.

Both legroom and access are good in the back of the Panamera, although the UK is being denied the extra 12cm of space in long-wheelbase Executive models.

Outside, mild revisions to the lights, bumpers and windows give a slightly fresher look. Inside, it’s all as was, with superb quality, decent kit levels, but the same confusing array of controls and buttons.

Still, it's likely to face tough competition from two other models at least – the Panamera S E-Hybrid, which offers comparable power with sub 100g emissions, and the diesel model, which is considerably cheaper.