We celebrate 120 years of Renault by getting behind the wheel of the Renault 4, 5, Estafette and more 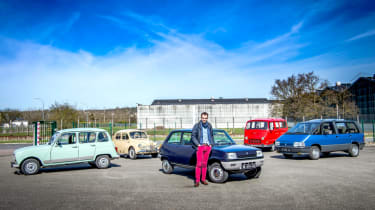 Tucked behind an unassuming fire door at the corner of a conventional car park lies a staircase. Climb three flights and there’s a small landing with posters describing health and safety regulations. Head through another set of doors and this mundane factory is transformed into a petrolhead’s paradise. A whole floor of Renault’s Flins factory, 25 miles north west of Paris, is devoted to celebrating 120 years of the firm, with 120 cars from Renault Classic’s 750-strong collection each marking a singular moment in the French company’s history.

Renault’s first 19th century cars rub shoulders with World Championship-winning Formula One racers, plus wacky concepts, too. The exhibition isn’t open to the public; it’s a treat reserved only for the plant’s workers when they take some time out from building factory-fresh Clios and Nissan Micras. However, Renault broke its house rules to allow Auto Express in for a walk down memory lane. A few steps in and the most important Renault sits before you.

• 100 years of Mitsubishi: 8 of the brand's greatest cars driven

The Voiturette Type A is the car that started it all way back in 1878. Resplendent in dark green with yellow wheels, it’s probably in better condition than it was when new. The Type A was the first car produced by Louis, Fernand and Marcel Renault.

The brothers, whose company was called Renault Frères, or Renault Brothers, used their father’s shed to build cars, and the Type A was the model that put the brand into the minds of the French public around the turn of the century. Hand-built Louis drove up the incredibly steep Rue Lepic in Montmartre, Paris on Christmas Eve 1878.

It was the first time a car had ever managed to climb the hill and orders immediately started to trickle in. Renault Frères was in business. Before long the whole family home became the Renault brothers’ production line and, by the end of 1899, 60 workers had built 70 cars by hand.

The Type B followed in 1900 (essentially a more comfort-focused Type A with a roof) and there began a confusing model-naming structure, starting with ‘Type’ followed by one letter, and then two and then a combination of names and numbers. Renault initially built cars for the well-heeled, but with the Great Depression in the thirties, it turned its attention to entry-level models for a newly hard-up middle class.

We had the chance to pluck out three cars from the Renault Classic collection, and it’s the post-war years where the firm’s history gets particularly interesting. Renault had been working on how best to get people moving after World War II as early as 1942. In December that year it secretly built and ran the first prototypes of the Project 106, a small, mass-market rear-engined car. 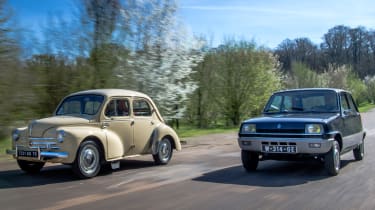 Four years later the car was launched as the 4CV. The 4CV was not only the first rear-engined Renault; it can lay claim to being the first ‘people’s car’ from the company. Powered by an 18bhp 760cc four-cylinder engine, it had space for a small family and, with the opening of the country’s first motorway, it helped to mobilise a war-torn nation.

More than 1.1 million had been built by the time production stopped in 1961. Our car is one of the last 1961-built examples. It’s finished in a typically period combination of beige with cream wheels and a red and cream interior, and it’s easy to see the appeal of the 4CV to a nation that had endured five years of occupation and war. Its small dimensions and cutesy curves were a sharp contrast to the heavy, upright pre-war designs.

Pull the dinky handle and side step around the rear-hinged door (which opens with half the front wing attached), and it’s a tight squeeze to get in with that low roofline. You sit on camping chair-like seats in an awkward position, and the sense of imminent danger from modern traffic is terrifying. The door is scalloped out for that flowing front wing and just a thin layer of red vinyl separates you from a ghastly side impact. 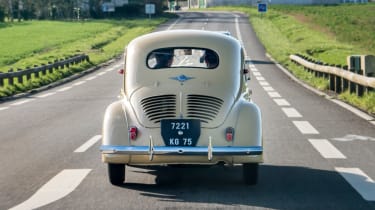 The starting procedure is simple – a quick twist of a Bakelite switch as is the view over the equally plain dash. It’s a metal affair with just a little instrument binnacle and an open slot for a glove compartment. A large two-spoke metal steering wheel helps to make the cramped driving position seem a bit more car-like. There’s hardly any grunt, so you drive along in a whirlwind of noise and the smell of hot wool seats, twirling the tiny, wand-like gearlever.

It’s a charming experience now, but one that would have been exciting and liberating 70 years ago. By 1961, though, it would have felt ancient. That’s because the 4CV made way, rather confusingly, for the 4. The 4CV and its contemporary, the Citroen 2CV, may have laid down the foundations of a mobilised society after the war, but it was the 4 that allowed the nation en masse to take the wheel. The Renault 4 could be France’s greatest car; it was certainly one of the most popular, and more than 8.1 million examples were built by the time production ended in 1992.

But why was it so such a hit? Well, it’s simple really: it was the template not only for all future Renaults, but also helped create a blueprint for what small families wanted from a small car. The designers put the engine in the front and hooked it up to the front wheels, making the 4 Renault’s first front-wheel-drive car. By positioning the motor up front and replacing the 4CV’s curves with a stout, boxy body, the company served up a large boot. 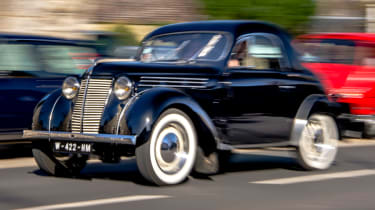 And by giving the load bay a hatchback tailgate and folding rear seats, it provided previously unheard of levels of space for a small car. Climb aboard the 4 and it’s more akin to a modern car than a 4CV. There are no suicide front doors and the driving position is more comfortable; even getting in is easier thanks to the ride height.

The 4 still has its quirks: the gearlever, for instance, is comical. The 4CV’s conventional stick made way for a bizarre lever that springs out from the dash. It’s known as an ‘umbrella gearshift’ and you have to push the lever in for first, pull it back for second and so on. The 4 soldiered on until October 1992 and during that time it stayed virtually unchanged. Our late car is only really identifiable by the later plastic grille and its 1,108cc engine, and in its 31-year life, power only swelled from a pathetic 23bhp from a 603cc engine in 1961 to the paltry 34bhp of our model.

But throughout that time it was a tough, well-made little car that could withstand almost anything. Start it up and the four cylinder engine quietly growls; shove the umbrella into first and you glide away quite elegantly. Once up to speed the engine chatters away happily, but turn into a corner and the 4 shows off its greatest feature. 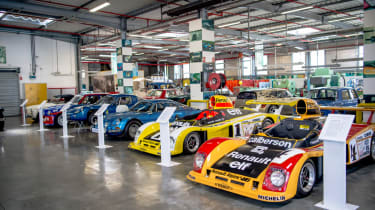 Approach a bend at anything above 10mph and the body rolls over its wheels; once settled on its springs, the 4 just drives around the corner at a hilariously jaunty angle. Pick up some more speed and the process just happens a little more quickly – it’s never scary, never wallowy, just so lazily French. It’s utterly fantastic.

While the 4 was the car for the people, the 5 of 1972 was for the female fashionistas. By the early seventies the 4 was entrenched in French society and culture, and was the archetypal functional car, but the 5 was something different. Underneath it was based on the 4, but with a brief from Renault management to create a ‘fun car’, designer Michel Boué gave the 5 a wedgy seventies body and, for extra protection in tight Parisian parking spaces, wraparound plastic bumpers.

A five-door model followed in 1979 and was frequently updated, with a new version arriving in 1985 before disappearing in 1996 with 9.2 million sales to its name. The chic Clio arrived in 1990, with the 5 then becoming the functional choice. Finished in a subtle navy blue, our 1977 Renault 5 has a typically seventies interior. Lurid orange brushed nylon seats go perfectly with the ribbed and padded dashboard. From the driving position to the control ergonomics, the 5 feels far more modern than the 4.

It’s quite sprightly to drive, even if our car musters just 44bhp from a 956cc engine, but as it was based on the 4 there’s the same torsion bar suspension, leading to similar hilarity when cornering. Yet ride comfort is exemplary and you can’t help but feel the 5 is the sweet spot of all Renault’s small cars – ever. Ask most French people to name the country’s greatest car company, and the answer more often than not is Renault. And with 120 years of great hits to its credit, it’s easy to see why. 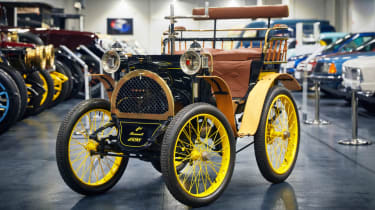 No list could be complete without Renault’s first ever car. It was built in the Renault family’s home and put the firm on the map after Louis Renault drove one up the Rue Lepic in Paris on 24 December 1878. This may have been a publicity stunt, but it was one that worked because by 1899 Renault had built 70 cars by hand. 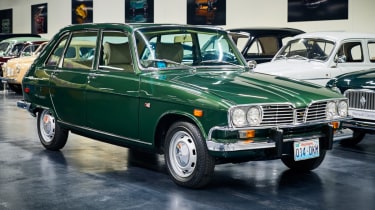 The 16 used the Renault 4’s front-engined, front-wheel- drive and hatchback body formula in a larger package. In so doing it became one of the fathers of the modern family car, and with typically French styling and suspension, it was one of the best-loved models of the period. 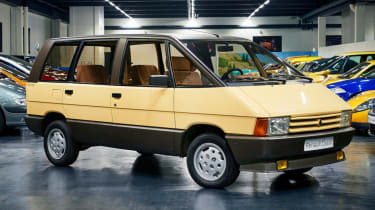 Designed by Matra, the Espace was the first modern day MPV. At first buyers didn’t like it: the story goes that Renault sold just nine in the first month. But its practical, spacious character eventually appealed. The Espace still exists as a stylish MPV-cum-SUV, but it’s not on sale in the UK. 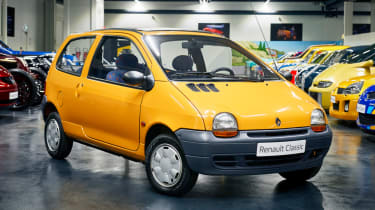 The cute Twingo arrived in 1993 and slotted beneath the Clio in the range. It was hugely spacious, stylish and had a dependable engine from the 5. Sadly it never crossed the Channel, and while later Twingos have, they’re nowhere near as characterful, funky or clever. 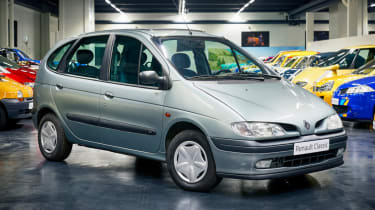 Hate small MPVs? Blame the Mégane Scenic. It was the forefather of the genre and mixed hatchback running gear and pricing with more space and versatility. It really was a game-changer in 1997. While people choose SUVs instead of MPVs these days, the Scenic is still loved.

Which is your favourite Renault? Let us know in the comments below...