100 years of Mitsubishi: 8 of the brand's greatest cars driven

In 2017 Mitsubishi marked its 100th birthday, so we joined in the party by trying out some of the brand's classic motors 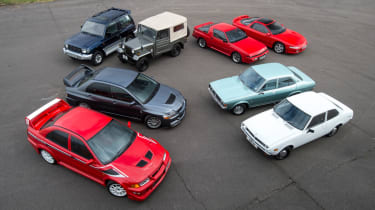 The motor industry is steeped in heritage and history, and companies are falling over each other to celebrate anniversaries to help sell new models, particularly the high-end car makers. But only a handful can say, proudly, that they’ve been building cars for 100 years, and Mitsubishi became part of that exclusive group this year.

Although the Japanese manufacturer began building cars in 1917, with the Model-A being its first car, it wasn’t until 1974 when UK buyers could get their hands on a Mitsubishi, when the Colt Car Company arrived. It later rebranded to match the worldwide Mitsubishi name, and during the following decades the firm brought some true motoring icons to British shores. We drove eight of the best to celebrate the brand’s special birthday this year.

One of the first cars British buyers saw from the marque was the Colt Lancer, and it’s easy to see why UK drivers were won over by this unfamiliar model. It’s tiny from the outside but very spacious once you get inside, and even today it remains simple to drive as well. 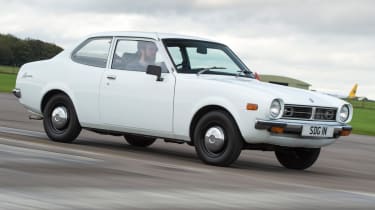 The two-door is genuine fun, with a large, thin-rimmed steering wheel and a surprisingly slick manual gearbox. The Lancer is no performance car, but the 1.4-litre four-cylinder petrol engine is strong enough. For its time, its 92bhp made it responsive and it feels like it could keep up with a modern city car in a straight line.

It feels very similar in nature to the four-door Galant, which also has a seventies charm to the way it drives. It’s much softer than the Lancer, and feels a bit more upmarket inside as well. With its white seat covers and leatherette door cards, the upholstery has the feel of a Japanese taxi, and the small, neat dials and spacious interior are among its most pleasing features. Like the Lancer, though, it’s not great to drive by today’s standards, but it does have bags of old-school charisma.

Another model imported by Mitsubishi Motors UK in the seventies was the Jeep CJ-3B Type 27. It’s a version of the all-American Willys Jeep that was built by the brand under licence in 1979, and officially imported by Mitsubishi Motors UK. This car was recently restored, and it’s a wonderful example: the paintwork and exposed engineering are immaculate, and it drives smoothly and easily as well. 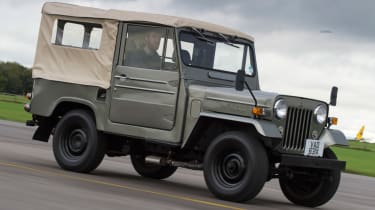 The four-speed manual gearbox has a long throw, but it’s precise, and the 2.6-litre four-cylinder petrol engine is torquey and responsive. There are two front seats and two more that face inwards in the rear, and, thanks to four-wheel drive and a low-range gearbox, there’s plenty of potential for serious off-roading.

While Mitsubishi’s seventies models were fun to drive, the brand is better-known in the UK for its performance cars, and the 1988 Starion Widebody is a perfect example of where that reputation came from. Its turbocharged four-cylinder made it the fastest 2.0-litre car on the market in its day, with a 0-60mph time of just 7.1 seconds. That was very fast back then, and even today the Starion feels like a quick car. With 178bhp and weighing 1,220kg, the two-door coupé is surprisingly keen, and, despite being turbocharged, it likes to be revved as well.

The steering is a bit slow, and that means you have to work hard to keep the Starion on the right line through a corner, but the chassis feels sweet and there’s an agility that you wouldn’t expect just from looking at it. 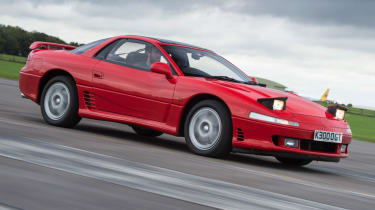 It’s quite a shock jumping into the other 2+2 coupé here, the 3000GT, straight after the Starion. These cars were released just a few years apart, but the 3000GT feels like a world away. It’s still not modern-feeling inside, with items like the cassette holder revealing its age, but the big coupé’s cabin is lighter and more comfortable to sit in than the Starion, and is well built.

The 3000GT took on contemporary rivals that included the Nissan 300ZX and the Toyota Supra, and it was designed for the all-important American market. Bristling with clever engineering such as active aerodynamics and a four-wheel-drive system, the 3000GT was a hi-tech model when it came out, which helps it to still feel relevant today.

The twin-turbo 3.0-litre V6 engine is another reason why the 3000GT feels totally different to the Starion – while the eighties model is quick, the 3000GT is still a genuinely fast car, even now. The huge hit of torque (407Nm at 3,000rpm) means its performance at high speed is astonishing. The V6 engine sounds good, with a deep rumble as you hit the gas, but it’s muted, and the 3000GT is actually surprisingly quiet at speed as well, making it a great grand tourer.

The heavy, mechanical-feeling manual box is satisfying to use, but its weight is mirrored in the rest of the instruments, including the accelerator pedal, which requires more force than you’d expect.

The 3000GT feels heavy as a whole and isn’t hugely agile, but it’s still great fun, and its weighty controls give it a real sense of occasion. The four-wheel-drive, V6-engined two-door shouldn’t have much in common with an SUV, but, with Mitsubishi, that’s exactly the case. The Shogun Sport features a 168bhp 3.0-litre V6 engine and a four-speed automatic box and, while it’s hardly a performance car, the Shogun is smooth, comfortable and oddly likeable.

The gearbox feels pretty old-fashioned now, with slurred shifts and only four speeds, but the engine is powerful and the squishy seats mean it’s a good cruiser. You’d never see a big petrol V6 in such an SUV these days, which is partly what makes this model so interesting. But while the modern Mitsubishi is known for SUVs, the brand resonates most strongly with fans of nineties and early noughties rally machines, epitomised by the Lancer Evolution series. 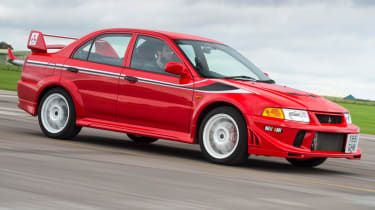 Two of the most loved versions of the line are the Mitsubishi Lancer Evo VI and the Evo IX, and we were let loose in both. The Evo VI we’ve got is a very special Tommi Makinen edition. It was built to celebrate the Finnish rally driver’s four World Rally Championships with the brand, and only 250 were ever brought to the UK.

It featured new seats, wheels and decals to mark it out over the normal Evo VI, but also got a redesigned turbo, a new exhaust system and tuned suspension to make it better to drive. It’s easy to see why it has become a true icon of motorsport, because it’s still one of the most exciting and engaging four-wheel-drive cars around.

The precise, super-sharp steering is brilliant, and the trick suspension allows you to mimic Makinen as you blast through corners, with the four-wheel-drive system letting you get the power on hard coming out of a bend. The Evo VI feels light on its feet, endlessly responsive and truly analogue in today’s digital world. It has a sense of connection few modern cars manage. 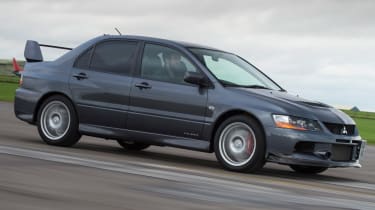 With 276bhp and four-wheel drive, the Makinen goes from 0-60mph in just 4.4 seconds. Yet its engine is so much more engaging and exciting than many modern turbo units, revving quickly and sweetly, while the manual box is superb. It has a heavy action like the 3000GT, but it’s more precise.

The later Lancer Evo IX MR FQ-360 is clearly a direct relation, because it still features the same basic layout: a turbocharged 366bhp 2.0-litre four-cylinder engine, four-wheel drive and a rewarding chassis. It’s even faster than the Evo VI, taking just 4.1 seconds to go from 0-60mph.

The sharp responses, sweet manual transmission and incredible performance mean the Evo IX is really great fun and leaves modern four-wheel-drive hot hatches trailing; we suspect it would be faster down a tight B-road as well, thanks to its more confidence-inspiring feel. It’s a great way for us to finish – a real highlight of Mitsubishi’s century.

Which has been your favourite Mitsubishi? Let us know in the comments below...