Renault Kadjar joins Qashqai and Tiguan in oddly-named crossover segment - but can it outdo rivals?

The Renault Kadjar is every bit as good, if not slightly better, than the Nissan Qashqai, with which it shares may of its mechanicals. It’s stylish, nice to sit in, offers decent practicality and is enjoyable to drive. The range-topping Signature model with the 1.2-litre petrol wouldn’t be our preferred combination - so we expect this Renault to be even more compelling in a more affordable trim with a diesel engine, and possibly even worthy of five stars.

Renault has often been an innovator of new vehicles – after all it created the mid-sized MPV class with the Scenic. But the French firm has moved at an escargot's pace to exploit the rapidly growing crossover market while its Alliance partner Nissan has been harvesting huge profits for years from its Qashqai.

In 2013 Renault finally got its act together and released the Clio-based Captur which has proved a big hit with around 30,000 sales in the UK to date. But it's that car’s larger brother the Kadjar which promises to reap bigger rewards.

Set to hit UK showrooms in September it will take on the Peugeot 3008, Volkswagen Tiguan and, of course the market-leading Nissan Qashqai. 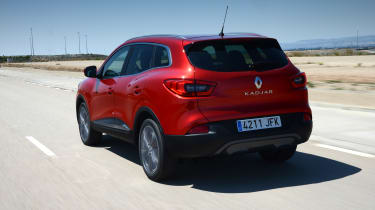 The Kadjar uses the modular platform from the Qashqai, some of the parts are even assembled at Nissan’s Sunderland Plant then shipped to Spain where the Renault is built. It also shares suspension, tyres, gearboxes and engines with its Japanese sister. And this gives the Renault a great start in life, because, unsurprisingly, it feels pretty much identical to drive.

So while you’d never describe it as fun the Kadjar is very competent with precise steering and grippy, confident handling and is more than up to the task that any buyers will ever ask of it. Visibility is good, and this combined with light, precise controls make the Kadjar relatively easy to manoeuvre in town, and a car perfect for both the school run and commuting.

This is helped by the fact it rides well too thanks to supple suspension that soaks up the bumps. Only on really broken surfaces does it start to lose composure and fidget about. This is a car which strikes the perfect balance between comfort and handling - you do feel sufficiently connected to the road to be able to tell what’s going on underneath you, but not so connected that it could become tiresome.

Interestingly the Kadjar doesn't feature the Active Body Control that Nissan uses to stabilise its car in undulating bumps by using the ABS to nibble at the rear brakes. Basically, Renault’s engineers thought such gadgetry unnecessary. And our first impression is that they are right. 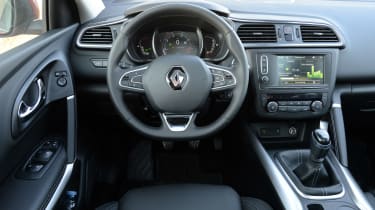 Renault clearly believed the entry-level 1.2-litre turbo petrol needed a bit more power too as here in the Kadjar it has 128bhp – 15bhp more the Qashqai. While it’s not a huge leap, it does make the car feel slightly more sprightly and cuts the 0-62mph sprint time by almost a second, yet delivers the same 50.4mpg in the base trim Expression+ model.

And really for those people who will mainly be driving in town the Kadjar 1.2 TCe will do the job just fine, because with maximum torque available from just 2,000rpm it’s got sufficient get up and go for nipping about round town. But for buyers doing more miles they will be better off with one of the two diesels available: a 1.5-litre or a 1.6-litre.

The latter has plenty of pulling power and is perfect for those wanting to tow (a retractable tow bar is available as an option) or planning to do a little off road as you can get it with an all-wheel drive system that can send up to 50 per cent of the power to the rear wheels. The big seller, however, will be the 1.5-litre. It can do 74mpg and emits just 99g/km of CO2 plus. Plus you can get it with a dual clutch automatic gearbox and it still achieves those impressive figures. 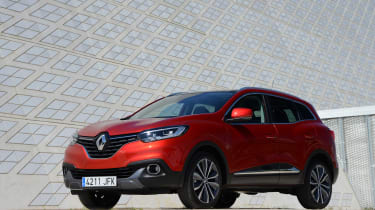 Both diesels also deliver more mid range punch than the 1.2-litre petrol which at higher speeds starts to feel a little stretched requiring you to change down a gear or two to overtake. And when accelerating in higher gears the little turbo makes a faint whining sound like there’s balloon being deflated under the bonnet, which spoils the ambience somewhat.

The Kadjar also suffers a bit of wind whistle round the A-pillars while there’s noticeably more tyre roar from the 19-inch wheels of the range-topping Signature Nav we tested. Other models fitted with 17-inch wheels don’t appear to suffer quite so badly with this and also ride marginally better too - something worth considering when deciding which trim to go for.

Still, the larger wheels look great, and overall the Kadjar is a very stylish car. While it may share most of its mechanicals with the Qashqai, almost everything you see and touch is unique and this ensures the has its own distinctly French character. For example the interior design is more sporty and this extends to the graphics on its easy-to-read digital instrument cluster - they just seem to have a little more panache to them than those in the more ‘generic’ feeling Qashqai.

Quality is impressive too, with soft touch materials in your direct line of sight and a sturdy robust feeling to all the switches. In short the Kadjar’s cabin feels throughly well thought out and solidly built. 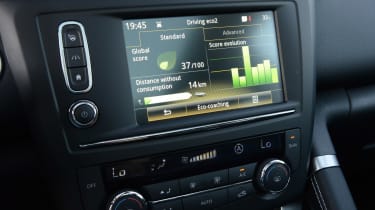 It’s generously equipped too. All but the entry car gets Renault’s latest R-Link 2 touchscreen infotainment system. This includes navigation and lets you can download various apps, for things like email, social networking and weather updates, from the R-Link store. But it’s the exterior design that really sets the Kadjar apart from the crossover pack.

Obviously beauty is in the eye of the beholder, but in our opinion the Renault is one of the most distinctive soft-roaders out there. With its concept car-like nose, swooping side panels and sculptured rear lights, there is a distinct Gallic flair. Brave considering the Kadjar has been built as a global car that will spearhead Renault’s attack on previously untapped markets such as China.

Overall exterior dimensions are almost identical to the Nissan - apart from at the rear where the Kadjar has marginally more rear overhang. This yields 42 litres more boot space than the Nissan with a total of 472 litres. 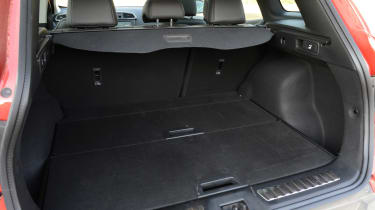 There are some neat touches too such as a modular false floor. This features two panels that can be arranged vertically to divide up the space or, when fitted horizontally, raise up the floor, to create a flat load bay when the rear seats are folded. Unfortunately, these and the movable floor and only available on the top two spec cars.

Our test vehicle was the most expensive Signature Nav trim. This includes full LED headlamps, ‘signature’ cloth and leather upholstery, a BOSE stereo and a panoramic sunroof – which, while a nice feature, does eat into rear headroom slightly. Thankfully there is still just about enough room in the back seats for a six-foot passenger.

However, in this range-topping guise, the Kadjar does start to get a little bit expensive – though overall Renault claims that like-for-like its car is still slightly cheaper yet better equipped than the equivalent Qashqai. But a quick scour of the pricing and specifications reveals the difference is marginal and unlikely to be the key deciding factor when choosing which of these siblings to go for. Renault may be rather late to the mid-sized cross over party – but what an entrance.