Who says the best things come in small packages? Renault is set to celebrate the festive season with a new Laguna estate. 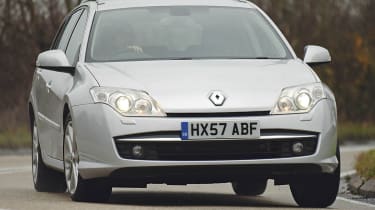 The Renault Laguna Sport Tourer is a decent car in many ways. For a start, prices begin at a respectable £16,940, while the driving environment is pleasingly laid out, and the boot has several useful features that make it both versatile and easy to adapt. However, as a family load-lugger, it’s less spacious than its closest rivals. Nor is the Renault as good to drive, due to its choppy ride quality.

The Sport Tourer arrives in January, hot on the heels of the hatchback. And the firm has taken the opportunity to debut a new flagship diesel engine, due in March.

Let’s look at the car itself first. It’s 108mm longer than the hatch, but is best described as a lifestyle load-lugger, rather than a cavernous family wagon. That’s indicated by the sloping angle of the tailgate glass and the plunging roofline.

However, the back end is conservatively styled and integrates well into the overall shape, making the car look balanced. But it’s far from exciting, which isn’t good news when you’re trying to appeal to image-conscious buyers. In terms of boot space, the Sport Tourer also comes up a little short. At 508 litres, the capacity is 33 litres larger than its predecessor’s, but lags behind the Mégane Sport Tourer’s 520 litres, and can’t hold a candle to class rivals such as the Honda Accord at 626 litres, or the Ford Mondeo, which has 554 litres.

It does have a couple of tricks, though. The parcel shelf retracts auto­matically, or can be removed and stored under the boot, while the seat folding mechanism is very simple.

There are buttons on the C-pillars, and levers either side of the boot: use them and the seat back springs flat without a helping hand. Larger back doors improve access, while in the front, the estate is identical to the hatch – smart, tactile and well built.

The main weakness is the poor shift quality of the six-speed manual gearbox. But you won’t use it that often with the new 173bhp 2.0-litre dCi diesel, which provides 380Nm of torque. One of six units in the line-up (four diesel, two petrol), it’s available to order now for delivery in spring. With its smoothness, refinement and linear power delivery, it’s worth waiting for. At 174g/km, emissions are 14g/km higher than the 148bhp 2.0 oil-burner. The stronger unit is £750 more and returns 3.5mpg less on the combined cycle, but takes nearly a second off the 0-60mph time.

However, another problem for the Sport Tourer is the way it drives. The chassis is grippy despite some roll, but the ride is poor on bumpy B-roads, sending tremors through the cabin and denting the Laguna’s claim to be a relaxed, upmarket estate.

Rival: Ford Mondeo estate Unpretentious but handsome, the Mondeo is an honest estate. Very well built, it drives brilliantly and is the better family load-lugger, even if the Laguna costs less.