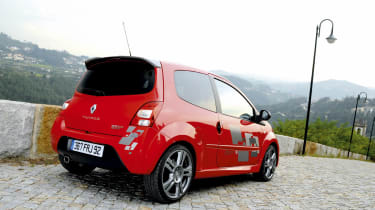 From behind the wheel, the Twingo certainly remains true to its French hot hatch roots. The combination of a solid chassis and powerful little engine is a real winner, as are the distinctive looks. This car is a hoot and sounds great – and the best bit is that you will never tire of all its performance. Let’s hope it has the success it deserves.

Is this the surefire hit Renault has been looking for? Sales of the new Twingo haven’t matched the French maker’s initial expectations – but top brass say this is the model to change its fortunes.

The latest addition to the Twingo line-up boasts a hot engine and sporty chassis. The all-new 133bhp 1.6-litre four-cylinder powerplant and bespoke suspension might not make the Renaultsport 133 sound as impressive as the likes of its high-performance Mégane R26-R big brother. Yet they are enough to launch the little Renault from 0-62mph in a mere 8.7 seconds. It will carry on until 125mph, too – and this brings it close to the mighty new Abarth 500 Esseesse.

The bulbous arches, rear spoiler and colour-coded body detailing add to the Twingo’s aggressive appearance, and reflect its motorsport heritage. However, this car isn’t all about zippy straight-line speed – the manufacturer has also fettled the handling to ensure that it has all the character of a classic French hot hatch. All Renaultsport models feature a specially dropped ride height, 16-inch alloy wheels with low-profile rubber, plus stiffer springs and dampers. The track has been widened by 60mm at the front and 59mm at the rear, which provides extra stability through tight bends.

Our car was also fitted with the optional Cup package, which sees further changes to the chassis. This sportier variant will set enthusiasts back an additional £650, and brings a 4mm lower ride height plus dampers and springs stiffened by another 10 per cent. There are eye-catching 17-inch anthracite alloy wheels, too. All of these additions make for a more extreme driving experience than the standard chassis.

Open the driver’s door and you are greeted by a set of snug racing seats and an abundance of quirky interior details. These include a small rev counter mounted behind the steering wheel and a digital speedometer which is situated in the centre of the dash. Plus, there is a set of aluminium pedals wearing funky pause, stop and play logos – these look great. Slot the bright red key into the ignition, twist it, and the motor warbles into life. It sounds, and feels, like a much larger engine. The exhaust system emits a fabulous bassy thrum at low revs, and this rises to a shriek at the top end to accompany the constant whine of the two camshafts.

The Twingo isn’t short on guts, either. Peak torque of 160Nm is reached at 4,400rpm and peak power is unleashed at 6,750rpm. The car is nippy and willing at the bottom end of the range, but the surge of power simply keeps on coming until the green ‘change up’ light flashes.

The steering is light and the turn-in is sharp, which compliments the agile feel of the car. Unfortunately, the Twingo’s otherwise positive driving experience is slightly let down by a mild delay in early throttle response.

Other grumbles include those rather cheap-looking, mock-grille plastic surrounds for the driving lamps, power-steering that sometimes feels a little heavy during low-speed manoeuvres, and minimal luggage space in the boot.

However, if you are looking for hot hatchback performance on a budget, not much can match the Twingo for real-world muscle which you can use every day. The 133 Cup doesn’t offer bags of interior space or exude quality, but it provides a great first foot on the Renaultsport performance car ladder – and most importantly, it will put a big smile on your face every time you get behind the wheel.