There's no diesel option, but both petrol engines are impressively efficient, and the Twingo won't cost a lot to run 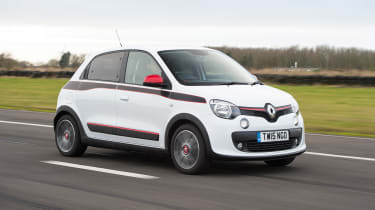 Efficiency has been a Twingo calling card ever since it was first launched, and that trait is maintained under the latest WLTP test regime. The SCe 70 1.0-litre three-cylinder petrol engine has two fuel economy figures, as the Play model doesn't have stop-start, but the Icon version does. As a result the SCe 70 Play returns up to 47.9mpg in the latest test procedure, while the Iconic mdoel returns 48.7mpg.

These figures are significantly down on the 62.8mpg quoted in the old NEDC test. However, this is a reflection on the tougher WLTP economy test, rather than the Twingo being any less efficient than before. This engine also has emissions of 126g/km in Play guise, while the stop-start Iconic manages a far more palatable 110g/km.

Moving to the TCe 90 0.9-litre three-cylinder turbo with stop-start, fuel economy is 47.9mpg with the manual gearbox, while the auto model manages 45.6mpg. That's not too bad a penalty, although you do pay around £900 extra for the EDC auto.

Insurance groups are low, with the SCe-powered cars falling into group 3, and the more poweful TCe cars in group 8. However, rivals from Skoda, SEAT and Hyundai offer lower group 1 and 2 ratings. 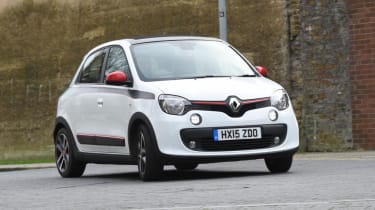 Second-hand values will be a concern for private buyers, as our experts predict that the Renault Twingo will retain only 30 per cent of its new price over three years. That puts it squarely in the bottom bracket of the city car depreciation spectrum – although considering the low starting price, you won’t lose much more in cash terms than if you chose a Volkswagen up!, which is estimated to hold on to 45 per cent of its showroom value. Lower-spec versions of the Twingo will perform best, as the second-hand market takes little notice of the cost of bells and whistles.