You have to wait a long time for a new Rolls-Royce to come around, but the Dawn has certainly been worth waiting for. It may, for now, be just the baby Rolls drop-top in the range, but it’s the best one and manages to mix complete luxury with surprisingly adept driving manners. Some may question why it costs as least £100,000 more than the already excellent Mercedes S-Class Cabriolet, but spend five minutes with the Rolls and the extra money needed becomes evident. It’s in a class of its own.

New Rolls-Royces don’t come along very often and especially drop-top versions, so the arrival of the Rolls-Royce Dawn is particularly special. It impressed us when we first drove it in South Africa earlier this year, and now is our first chance to drive it in the UK.

Not that the Dawn wasn’t ever going to impress, though. It has all the right ingredients to become one of the true great Rolls-Royces of the modern BMW-owned era with a hulking great 6.6-litre twin-turbo V12 up front, a luxurious interior for four, a near-silent operating fabric roof, beautiful bodywork and a surprisingly enjoyable chassis. 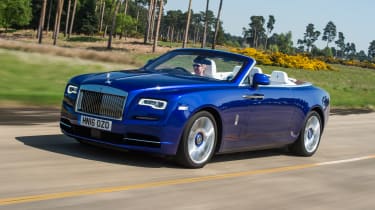 We’ll come back to the way it drives but there’s one important thing to clear up first, and that’s the Dawn is not a Wraith with the roof chopped off. Rolls-Royce is emphatic of it; so much so it points out 80 per cent of the body panels are unique compared to the raffish Wraith fastback.

On first impressions it does look like a Wraith with no roof, but look closer and you’ll spot the more flowing, curvaceous lines at the front and especially round the back. There is a more elegant and sporting look to it than the Phantom Drophead Coupe, and once the current Phantom family bows out in 2018, the Dawn will carry the mantle of being the only open air Rolls available for some time, so it better look the part.

And it does. However, while the Phantom is almost a road-going yacht – in both appearance and driving manners – the Dawn isn’t rid of the lottery winner-look; it isn’t the type of car aristocracy types will be floating around in. Our car, positively dripping in a whole heap of bespoke options, didn’t do much to dumb down the nouveau riche air the Dawn has. That’s not a criticism though, and it’s very clear the Dawn’s styling will appeal to younger 40-somethings Rolls-Royce is so desperate to court. 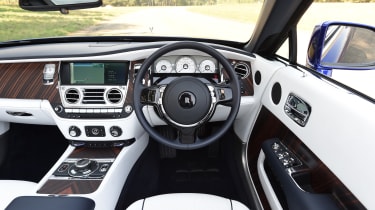 That’s probably why the Dawn drives like no other Rolls convertible ever made. It’s by no means a sports car – a Bentley Continental GT Convertible is considerably sharper to drive – but the Dawn has a sporting flair that belies its 2.5-tonne weight and gargantuan body.

Should you decide to turn off the beach boulevard and onto battered B-road, the Dawn feels surprisingly well resolved. The body is rigid and doesn’t wobble around and thanks to the same satellite aided transmission software on the Wraith, the Dawn’s engine and eight-speed ZF gearbox is always in the right ratio and at the optimum revs for driving with conviction.

Naturally, the 6.6-litre V12 utters barely more than hum when cruising, but press the throttle and there's a momentary deep-bowled sigh from the 12-cylinders before settling down to the same distant hum. Powerful brakes and a floating ride distance you from some serious speed, but while the feel through the thin-rimmed steering wheel is good for a Rolls-Royce, a Bentley driver will find the Dawn lacking in feedback. 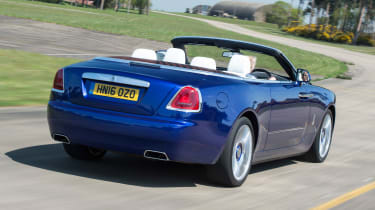 The rest of the Dawn is typically Rolls-Royce. There are some seriously beautiful Art Deco detailing and switchgear, and as expected the interior can be personalised just so. There’s space for four and with the six-layer roof up it’s almost as hushed inside as the Ghost four-door. The Dawn is also surprisingly efficient to drive – Rolls claims 19.9mpg on a combined run but we managed 21mpg.

However, the Dawn isn’t without its faults. Unlike the considerably less expensive (but still fantastically plush) Mercedes S-Class Cabriolet, getting into the rear could be more graceful if the front seats electrically slid forwards rather than the seat backs just folding down.

Buffeting in the cabin at speed will also be an issue for rear passengers and the door mirrors sit too far back and too high on the doors for our liking. Another gripe is the awkwardly shaped boot, and while Rolls has added its own fonts and colours to the infotainment system, fundamentally, it’s still BMW’s iDrive. That said, those willing to splash out £265,000 on a Dawn probably haven’t set foot in a BMW 118d.