We liked the new SEAT Arona SUV with the 1.0 TSI petrol engine, but is the 1.6 TDI diesel a better buy? 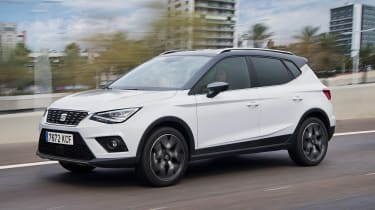 While there’s little to dislike about the diesel-powered SEAT Arona, our money would go on the excellent turbo petrol model. It costs less to buy and feels lighter on its feet; unless you’re covering big miles, the diesel’s extra outlay will take a while to recoup. Cheaper trims make more sense, too, with the less expensive SE Technology car offering all the kit you’ll want for a fraction of the cost.

The world may seem to be turning its back on diesel, which is why our first taste of SEAT’s new Arona SUV came courtesy of the VW Group’s tried-and-tested 1.0 TSI turbo petrol. But what if you’re not ready to make the switch and want a small crossover with appreciably low running costs? Can a diesel offer the best of both?

Those intrigued by the Arona TDI will be pleased to hear the petrol car’s fine driving dynamics remain intact. The smallest SEAT SUV impressed in petrol form, and despite not being as quiet or refined, it remains good to drive – with little body roll and a smooth-shifting manual gearbox.

It may not feel quite as light on its feet, but the 113bhp 1.6-litre diesel offers plenty of grunt and decent mid-range shove. The great slug of torque allows swift overtakes without changing gear, too. Those after an auto should look to the lower-power 93bhp TDI, available with a seven-speed DSG. 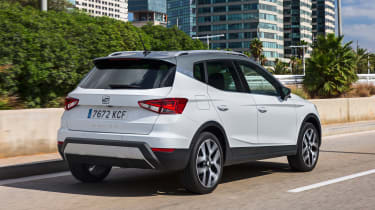 The Nissan Juke rival also rides pretty well, despite its sporty character. We’ll be subjecting the car to a full UK road test in the coming weeks, however, which will offer the true measure of refinement. Still, rattles and shakes are kept to a minimum, and while you can feel more vibrations through the wheel, it’s far from intrusive. The petrol Arona is quieter at 70mph, but if you want to cover long distances, there’s little wrong with the small SEAT SUV.

The thing is, at nearly £23,000, our Xcellence TDI test car is £2,160 more than the equivalent (and identically powered) 113bhp 1.0 TSI petrol. For private buyers it’ll cost the same to tax, while company car users will be stung by the three per cent Benefit-in-Kind diesel surcharge. 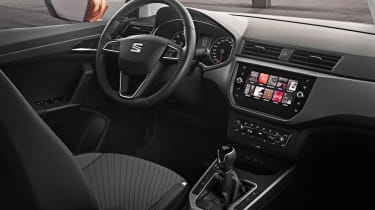 Official fuel economy and emissions figures have yet to be confirmed, but it’s unlikely the Arona will dip below the 100g/km CO2 threshold achieved by the most frugal Renault Captur.

Still, the petrol and diesel Aronas are equally spacious in the back, and both have lots of kit in top-spec Xcellence guise. Less expensive trims make more sense, however, with SE Technology offering SEAT’s crisp eight-inch touchscreen sat-nav with Apple CarPlay and Android Auto, plus wireless charging, air-con and automatic lights. Be sure you need the chrome trim, keyless entry and cruise control before forking out the extra cash.