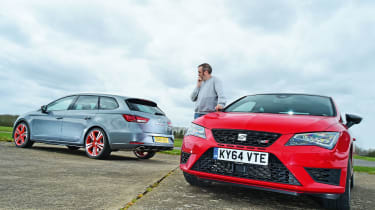 Fast, fun Leon strikes a masterful balance between red-hot driving thrills and everyday usability. It also looks great, and has a slickly styled, upmarket cabin. While the SC isn’t the last word in practicality, there are five-door and ST estate versions to choose from, too.

Our SEAT Leon Cupra has proved to be a fantastic performance car during its time with us. Its combination of power, handling and everyday usability fits the hot hatch brief perfectly. But one niggle has always bugged me; while our three-door SC looks the business, access to the back seats has been a bit of an issue.

It makes putting my son’s child seat in the back that little bit trickier, because while the doors open wide, folding and sliding the front chairs forwards for access leaves only just enough room to get his seat in there. 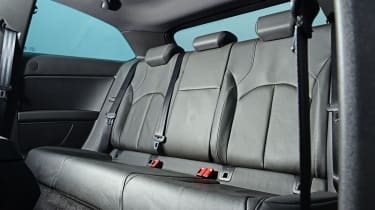 Thankfully, this has been the only issue I’ve had with the car during its eight months with us, and I’m happy to say that SEAT has the solution in the shape of the new Leon ST Cupra estate. And when we lined up the two cars side-by-side, it was clear that the SC and ST share the same performance philosophy.

The latter has the practical touches to be the perfect car for the Gibson household, with its extra doors and healthy 587-litre boot capacity. As I said, though, in every other respect the three-door Cupra has been an absolute joy to run for the past eight months. 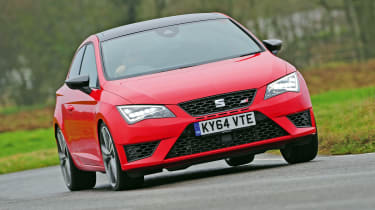 Part of that is down to the standard-fit Dynamic Chassis Control system. Simply press a button on the dashboard and the car’s character transforms to suit your mood. There are Comfort, Sport and Cupra modes, with Cupra turning everything up to 11 for the most focused driving experience.

Using Cupra mode not only stiffens the standard adaptive dampers, but it also enhances the response of the throttle and electronically controlled diff, weights up the steering and gives a throatier engine sound. 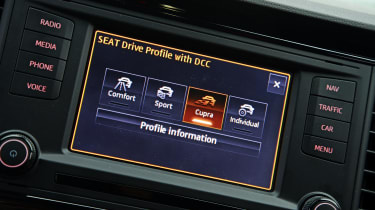 In addition, the software for the DSG transmission is reprofiled to hold on to gears for longer, but if you’re making the most of the Leon’s performance, it’s far more satisfying to take manual control with the steering wheel shift paddles.

I had the opportunity to take our Leon Cupra on-track earlier in the year when we tested it against the Toyota GT86 and Subaru WRX STi, and it was a delight to drive. Unlike with lower-spec models in the Leon range, you can turn the electronic stability control off – and taking full manual control of the car reveals how capable it really is, with masses of grip, an agile chassis and huge acceleration in a straight line. 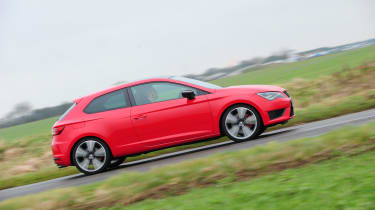 But what really impresses is how the Cupra’s racy instincts are reeled in when you switch to Comfort mode. Sure, the stiff chassis means the car tends to follow the rise and fall of speed bumps and other road imperfections, but the dampers are softened off enough to make it comfortable, while the engine’s broad spread of torque means it’s relaxing to drive at all speeds.

The Cupra has also returned pretty reasonable fuel economy. While track sessions will easily see the average dip into the high teens, gentle everyday use has resulted in a consistent 32mpg from the car, thanks to the standard stop/start and a gearbox that’s eager to get into the highest ratio possible in everyday driving. 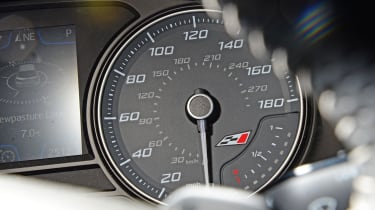 Unfortunately, our time with the Leon SC Cupra has now come to an end. I’m going to sorely miss its performance and all-round ability, so I’m just focusing on the lack of practicality in order to soften the blow. Just imagine if it was an ST estate that was leaving my life... 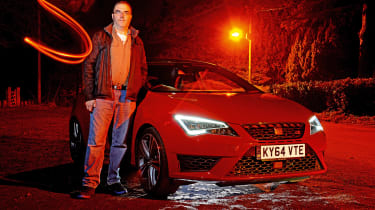 Now that the days are longer, there’s one great feature of our SEAT Leon Cupra that I’m going to miss using as often – the LED headlight technology.

SEAT has offered these trick lights as part of a free upgrade on SE and FR models ever since the Leon was launched, but Cupra versions come with the LED lamps as part of the comprehensive standard kit list.

What’s great about them is that they bathe even the darkest country roads in light that’s nearly as good as daytime, which means you can make the most of the Cupra’s scintillating performance at any time. 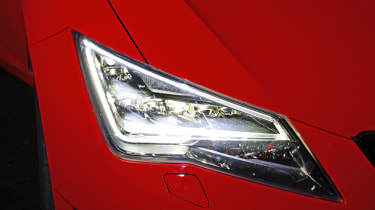 They’re directional, too, and the beam they cast helps you to see the road ahead, while the brilliant white light doesn’t dazzle oncoming cars like some bright xenons can do. Our car comes with the £300 Driver Assist Pack, which adds automatic main beam dipping, but the technology isn’t as quick to react as the driver when there’s oncoming traffic, so I usually override it.

So the lights are great, but what about the rest of the car? Well, the Leon Cupra is living up to its billing as a searingly quick hot hatch. Winter’s slippery roads meant it was a bit wayward with wheelspin as it tried to put all of its 276bhp through the front tyres, but now the weather is warming up, the added grip means it’s easier to access this power. 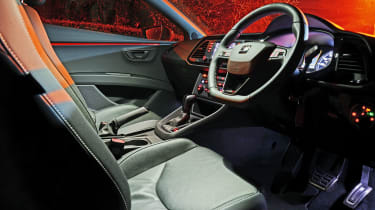 Our car previously came out on top on test against the Toyota GT 86 and Subaru WRX STi in, while our time on track meant I could safely explore the car’s limits. As it turns out, the Leon is a great performer, with a stiff, responsive chassis, fast steering and a crisp DSG gearbox.

One niggle I have with our car is the three-door body. It’s tricky to get in and out of the back seats, and installing my two-year-old son in his car seat is a bit of a fiddle, as you haveto negotiate a slightly narrow opening behind the front seats. However, once in place, there’s plenty of room, and the hatchback body means it’s more spacious than a coupé. 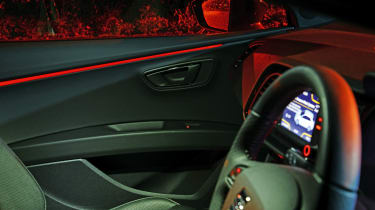 Another minor quibble is how the Cupra looks. Aside from the big wheels, LED headlights and Cupra logo across the bootlid, there’s not a great deal to differentiate it from the lower-spec Leon FR. However, in some ways I like this subtle approach, as it means the Cupra doesn’t attract attention like other hot hatchbacks, which means I can get on with enjoying driving it. 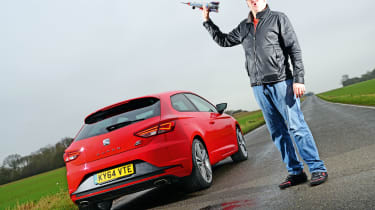 The Space Race of the 20th century was as much about the US and Soviet Union attempting to intimidate one another by building bigger and faster rockets as propelling astronauts into the cosmos. And in a similar vein, today’s car makers are embroiled in their own battle to build the ultimate hot hatch, pushing the envelope of performance as far as it can possibly go.

The latest addition to Auto Express’ fleet is our current hot hatch champion, the SEAT Leon Cupra 280, and just like the rockets of the fifties and sixties, our DSG automatic model features cutting-edge tech to make the most of the 276bhp being fed to the front wheels, in the form of launch control. 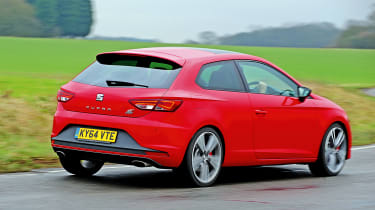 However, unlike a complex space rocket, it’s extremely easy to use. Simply press a button to switch off the stability control, select Cupra mode via the Drive Profile menu and place your feet on both pedals. The electronics then take over, holding engine revs at around 3,000rpm, and when you take your left foot off the brake, the Leon blasts off.

SEAT claims that its hot hatch can sprint from 0-62mph in 5.7 seconds, although our slippery winter roads mean you’ll get a flurry of wheelspin rather than a fast time. 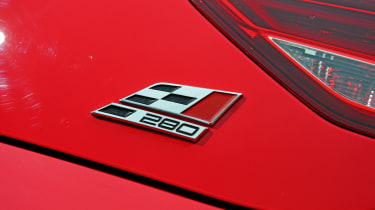 We’re going to have to wait until the weather warms up to make the most of the launch control system, but the Cupra mode also makes a big difference to the way that the Leon performs in corners. Stick with Comfort mode, and the car is surprisingly docile. The ride is firm, but it smooths out bumps pretty well and is far from uncomfortable, while the DSG gearbox is responsive in auto mode.

Select the Cupra setting, and the Leon’s steering, throttle and diff settings are all optimised to deliver excellent cornering ability. There’s barely a hint of understeer, even if you’re a little ham-fisted with the throttle mid-bend, while the sharp steering responds instantly to your inputs. There aren’t many cars in any class that feel as capable on a twisty road. 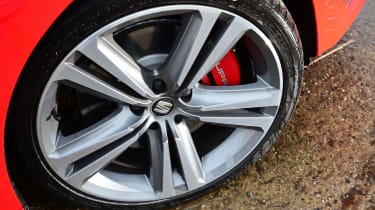 Add in a big boot and a spacious cabin, and the Leon Cupra is just as practical as any other hot hatch, although our car’s three-door body makes it a bit tricky to get in and out of the back seats.

There are plenty of goodies, too, including LED headlights, 19-inch alloys, sat-nav and LED interior lighting, while we’ve added leather, adaptive cruise control and a sunroof to make our car even more appealing. Plus, these luxuries make the Cupra’s searing acceleration even more surprising to unwitting passengers...