Can the SEAT Mii electric tempt city car buyers with its attractive price and 161-mile range? We take a spin to find out... 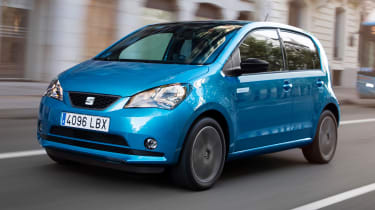 The SEAT Mii electric is another convincing EV, thanks to its keen pricing, solid battery range and comfortable, refined drive. It’s still not quite big enough to cope with a small family’s needs, or regular use on motorways, but then, it still costs less than many superminis – and on the right electricity tariff, it could be delivering its 161-mile range for less than £2. Many city car customers and second car buyers will find that a tempting mix.

It’s ‘electric or bust’ for the city car, we’re told – the result of tightening efficiency rules and safety legislation making it harder than ever to make money out of anything smaller than a supermini. And here is the first of the VW Group’s efforts to save the class: the SEAT Mii electric.

Truth be told, this isn’t the first pure-electric model in the Group’s small car range. We’ve already had the e-Up! in a couple of iterations. But SEAT and Skoda have only ever offered their respective versions of the car, the Mii and Citigo, with traditional petrol engines. Until now. Indeed, SEAT UK recently wiped the conventionally powered Mii off its price listings entirely. If you want one going forward, it’ll be electric.

When the first e-Up! arrived it had just under 100 miles of range, calculated via the easier and older NEDC test. But the new generation of these electric city cars use battery tech from the e-Golf, so the Mii electric and its counterparts can now manage 161 miles between charges - based on the tougher, more realistic WLTP assessment. 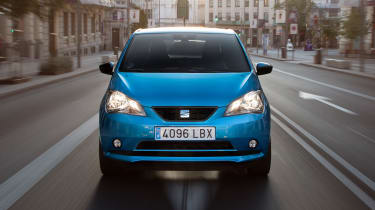 Charging from zero to 80 per cent via a 7kW home wallbox will take around four hours; the car can also use 40kW DC charging to achieve the same level in an hour.

For all this, SEAT is asking £22,800 - which translates to £19,300 once the plug-in car grant is factored in. That puts the Mii electric on the same level as a well-specced Ford Fiesta or Volkswagen Polo - but SEAT is hoping that the potential savings on running costs will persuade customers that it’s worth the switch regardless. The first 300 customers to sign up before the end of the year will get a wallbox, charging cable, three years’ servicing and three years’ breakdown cover included, too.

Stick down just over £4k as a deposit and you can have a Mii Electric for £199 per month; that’s not a lot of cash for a car that doesn’t use a drop of petrol, although the leasing deals on offer to customers elsewhere in Europe are even more attractive. Sales have already started, but the first UK deliveries won’t land until spring 2020.

On the road, the Mii electric is a curious mix of compromises - but one that still makes a decent case for itself. The battery installation has taken the Mii’s kerbweight from 929kg up to 1,235kg, and despite the initial electric-motor punch, it no longer feels as much of a darting urbanite as the regularly powered model. The steering feels weightier and a little slower, too; the turning circle isn’t quite so crisp, according to SEAT’s figures.

But that’s not to say that the Mii electric is slow overall. That 0-31mph (50kph) time is very much achievable, so there’s more than enough shove for pulling away from traffic lights briskly or nipping in to gaps in the traffic. You’ll count every one of the extra eight seconds that it takes to double that speed, mind you - not to the point where you’re struggling to keep up with traffic flow, but you certainly feel the powertrain getting closer to its limit. Regular motorway users would be well advised to check their usage patterns before committing. 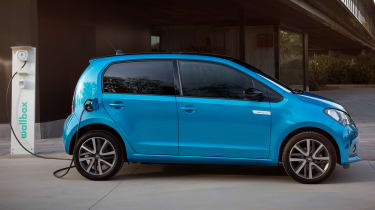 As you’d expect, the electric motor is more refined than the old three-cylinder petrol engine - to the point where you’re aware of other sources of noise, such as the wind around the side mirrors and the odd suspension thunk through the chassis. It’s very well behaved around town, however - again, an indication of how focused on that environment the development engineers have been.

That chassis remains a strong point, too. The suspension has undoubtedly been tightened up to cope with the extra weight, but there’s still excellent compliance over potholes and speed humps, and not much body roll as a trade-off. The Mii and its stablemates have always been among the most composed of city cars; we experienced little during our mileage around Madrid to suggest the electric editions will be any different.

You can play around with the powertrain, focusing on comfort and performance, or efficiency. There’s a noticeable step off in pace when you switch into Eco mode, in fact - but it only seems to add a few miles to the range. 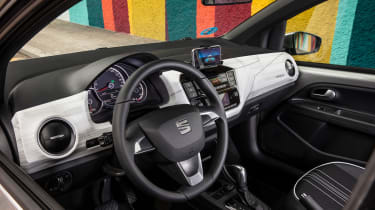 Equally, flicking the gearstick left and right increases and decreases the amount of brake energy recuperation. We’d rather the system was on by default - especially in a city car that will spend a lot of its life negotiating junctions and traffic lights - but at least the car has the potential to bring itself to a halt on recuperation alone, allowing you to drive using only the throttle pedal if you’re good enough at anticipating traffic flow. Based on our test route, which mixed urban streets, hilly terrain and 70mph motorway, the claimed range of 161 miles looks thoroughly achievable.

The rest of the time, this electric Mii is every bit as convincing around town as the petrol car was - so slim enough to feel manoeuvrable down side streets, and a doddle to park, thanks to miniscule overhangs front and rear. 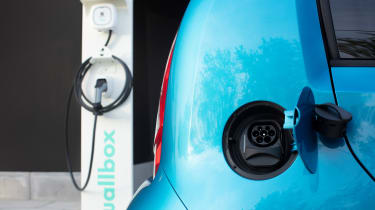 As was the case on the regular Mii, there’s a twin-track approach to infotainment. The car gets a five-inch central colour screen with DAB radio as standard, but there’s no nav, Android Auto or Apple CarPlay. Instead, you access these features via a universal smartphone cradle. It feels like a half-hearted effort in an era when many conventional city car rivals offer full-colour displays with proper smartphone integration.

The Mii electric can also feed data through a SEAT app to your smartphone, offering remote control of the heating and ventilation (useful for warming the car on cold mornings while it’s still plugged in), charge management, efficiency information and the vehicle’s location.

The rest of the cabin is basically unchanged, meanwhile, so it’s great for two adults and a couple of small children, and a bit of a squeeze for any more than that. The boot is a meagre 251 litres - pretty tiny in an era when a Renault Clio offers 391 litres. But you can boost the Mii’s capacity to 923 litres by folding down the second row of seats. And in the most part, there’s enough space there for half a dozen well-filled shopping bags.

The interior finish is smart rather than luxurious, with solid-feeling switches in all the right places, body-coloured elements in the doors and a patterned panel across the fascia to avoid it being just a slab of grey plastic.