It’s not as practical as the Skoda Kodiaq, but the Tarraco is spacious in five-seat guise 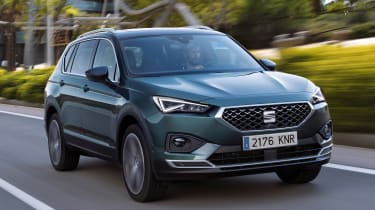 Until now, if you fancied a seven-seat SEAT, your only option was the highly capable but ageing Alhambra MPV. The Tarraco is a different variation of a similar theme, offering the same number of seats, albeit without the same level of fuss-free flexibility and practicality.

Indeed, if you regularly carry seven people, the Alhambra remains the best option – the Tarraco is far more suited for use as a five-seater with the third row of seats designed for occasional use by children.

The Tarraco is 4,735mm long, 1,839mm wide and 1,674mm tall (including the roof bars), making it similar in size to the Skoda Kodiaq. It’s also longer than the Hyundai Santa Fe, while the wheelbase is 90mm longer in the Tarraco, which creates more passenger space.

There are plenty of storage options, too, including door bins wide enough to house a large bottle of water, a storage bin beneath the centre armrest and two large cup-holders.

When judged as a five-seat SUV, the SEAT Tarraco is easy to recommend. There’s plenty of room in the first and second rows of seats, with enough adjustment in the driver’s seat to create a comfortable driving position. 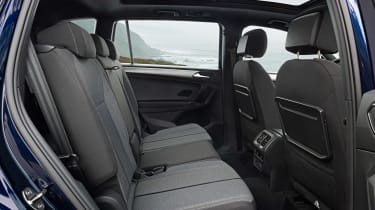 The driver and front seat passenger will find a generous amount of shoulder room, while there’s enough space in the second for three adults. The amount of headroom is excellent throughout the cabin, while three sets of Isofix mounts across the rear seats will be useful for families.

It’s only when you climb into the third row of seats that things start to get a little cramped. Young children and early teens will have little cause for complaint, but adults will find it rather uncomfortable. It’s also worth noting that there are no Isofix mountings in the third row.

The second row of seats split 40/20/40, which means you can fold the middle seat down when carrying long items, but still make use of the outermost seats.

While the Tarraco and Kodiaq are incredibly similar, it’s the Skoda that boasts the larger boot. In the SEAT, you get 700 litres with the third row of seats folded down, but the Skoda offers an additional 20 litres of luggage capacity.

It’s a similar story when you fold down the second row of seats, with the Tarraco liberating 2,005 litres of space and the Kodiaq offering a cavernous 2,065 litres. It’s not that the Tarraco is small, it’s just that Skoda does flexibility and practicality better than most brands. 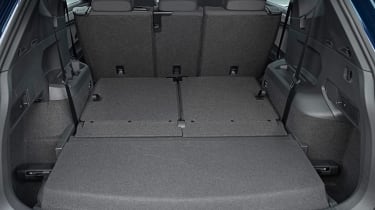 Which is why you’ll find the likes of umbrellas in the doors, an ice scraper behind the fuel filler cap and door protectors in the Skoda, but not in the SEAT. Small details, perhaps, but they soon add up when you start looking at an SUV as a long-term proposition.

The Tarraco’s third row of seats fold down to create a totally flat floor, although the space is flanked by two deep wells, which is far from ideal.