Not the most engaging around, but it's grippy, composed and a more mature way of going quickly 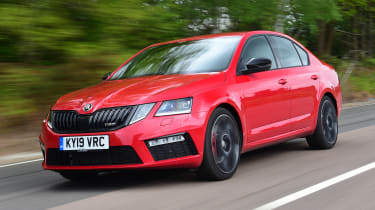 Despite having a 54mm longer wheelbase than the closely related VW Golf GTI, the Octavia shares the same MQB chassis as its VW Group cousin, highlighting the platform’s flexibility. Many other components are also carried across to the Skoda, including the 242bhp 2.0-litre turbocharged engine, the optional seven-speed dual-clutch transmission and the limited-slip differential.

As a result the Skoda offers a similar level of performance to the Golf on paper, although in reality there are subtle differences. The suspension set-up is the same as the VW’s, with MacPherson struts at the front and, as on more powerful versions of the Octavia such as this one, a multi-link set-up at the rear. Passive dampers are also standard, but as with the Volkswagen, the optional Dynamic Chassis Control adaptive dampers are a worthwhile option to add.

The extra length in the Octavia’s wheelbase compared with the Golf GTI and the fast-steering of the Peugeot 308 GTi mean the Skoda isn’t as agile as either of its rivals. However, this is all relative. Point the vRS down a twisty road and drive it hard and you’ll be impressed at the level of performance and composure on offer from a family hatchback of this size. 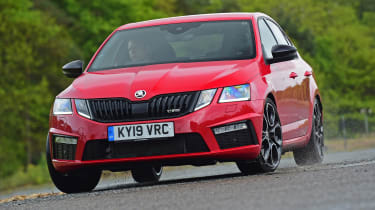 Still, the steering isn’t as communicative as the 308’s and with a larger-feeling steering wheel compared with even the Golf’s, it feels a little slower, meaning you have to work it ever so slightly harder and/or faster to get the Octavia to turn.

It does at least mean it’s a relatively relaxing car to cruise in, despite its driver-focused set-up, and while the extra length in the wheelbase might compromise agility marginally over its shorter hatchback rivals, it does mean the Skoda’s body seems to be more composed over bumps.

In Comfort mode the dampers deal with rough roads fairly well, although on standard 19-inch wheels you still feel poor surfaces. This is more pronounced if you select the Sport setting, where the Octavia’s body control is also tighter. However, it feels harsher in this mode than the mechanically similar Golf.

While the Octavia vRS plays it safe from a handling point of view, specifying Dynamic Chassis Control for £870 is well worth considering. Left in Comfort mode, the adaptive dampers slacken off a fair bit (though calling them comfortable is stretching things), while Sport mode brings about a stiffness that contributes significantly to the vRS’s sporting intent.

Go for the vRS Challenge and you get DCC thrown into the deal, as well as a ‘sports sound’ exhaust. This pipes a synthesised engine note into the cabin when Sport mode is selected, which adds to the sense of occasion, even if it sounds more like a boxer engine at certain revs, and is some way off being an authentic experience.

The six-speed manual gearbox is accurate and direct enough, but lacks the finesse of some hot hatches, such as the Honda Civic Type R. All the more reason, then, to go for the £1,000 or so DSG dual clutch gearbox, which better suits the linear power delivery, and helps elevate the vRS into a proper point-to-point weapon, albeit a fairly digital-feeling one.

Both the petrol and diesel engines in the Octavia vRS are shared with the Golf GTI and GTD, but because of the Octavia’s extra weight, there's a slight penalty in terms of speed and efficiency. You'd have to be driving very quickly to notice, however.

With the launch the facelifted Octavia in 2017, there was a power hike for the hot vRS model. The new flagship was boosted to 242bhp to seal its place at the head of the line-up. The power output makes it the fastest Skoda ever, with a 155mph top speed, while in greasy conditions when we tested it, it sprinted from 0-60mph in 6.8 seconds. It struggled with wheelspin off the line a little, but once it was rolling the Octavia showed the full potential of its enhanced engine. The 30-70mph test through the gears took just 5.5 seconds, and it covered 30-50mph in third in 2.7 seconds.

On the road the vRS has an impressive level of grunt. The Skoda’s engine isn’t the most characterful, though. While it delivers a strong mid-range hit, from 4,000rpm the Octavia takes off with a frantic top end. The engine sounds a bit flat, but in Sport mode the note is enhanced to give a deeper, bassier tone.