Sporty upgrades help lift the dull regular Octavia, but it's still quite a subtle and understated hot hatch

If you're after a performance hatchback that will knock the socks off passers-by with its striking bodywork covered in scoops, skirts and spoilers, the Skoda Octavia vRS isn't it.

The latest Octavia is a handsome, but rather bland, car; and, while the tweaks to the vRS version do help to lift its profile, it's still understated compared to rivals. Of course, that's exactly what many buyers want, and the reason why so many are used as undercover traffic police cars.

The new front and rear bumpers add sharpness and a bit of extra visual width, while you can now get 19-inch alloys as an option for the first time. There’s a small rear wing and twin-tailpipes but the best way to increase the visual impact of the vRS is to opt for one of the brighter paint colours, including Rallye Green and Race Blue. 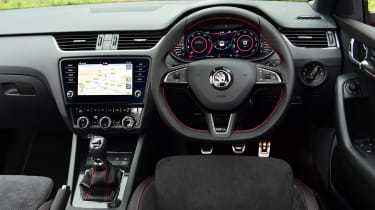 Inside, it's more of the same, and if anything, the vRS tweaks are a bit too limited. Alcantara trim around the cabin elevates the 245; it feels upmarket and looks great. The car’s standard sports seats are electrically adjustable as well. That's about it. But the ease of use and solid feel of the standard Octavia's cabin remain, which is a good thing.

Skoda’s eight-inch touchscreen infotainment system is based on the same unit as the VW Golf GTI's, with Skoda’s own design when it comes to the visuals.

It means the systems are closely matched, offering a similar level of response and functionality, including a WiFi hotspot, sat-nav, Bluetooth, DAB, Apple CarPlay and Android Auto, and some online services, although the free subscription is only for one year here, so is more limited than VW’s 36-month offer. 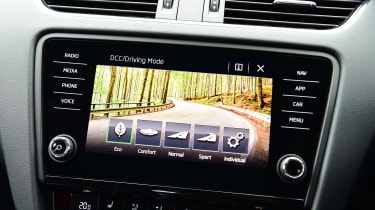 The unit also has the same drawbacks as the Golf in that the glossy screen picks up fingerprints easily. The infotainment display is better placed in the dash than the VW’s, although it’s still not perfect.

The Skoda lacks one impressive standard feature of the GTI; it only gets an LCD display in between the standard dials, because the digital 12.3-inch panel on the Golf GTI isn’t available even as an option here.