How does the Skoda Scala – the Czech company’s new VW Golf rival - shape up on British roads? 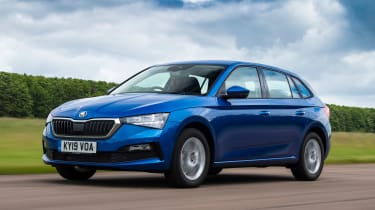 The Skoda Scala is a real achievement for the Czech company. It rides extremely well, especially on SE spec’s 16-inch alloy wheels, yet it’s still precise and good to drive. What will matter more to most buyers, however, is that while the new Skoda is more practical than most of its rivals, it’s also one of the cheapest cars to buy. Ultimately our verdict has to factor in cost – and the Scala is among the best of its breed on value for money.

We loved the new Skoda Scala when we drove it for the first time in Croatia earlier this year. Now, we’ve had the chance to get behind the wheel of a right-hand-drive model on British roads, which is any car’s toughest hurdle.

To recap, the Scala is the Czech brand’s latest rival for the Volkswagen Golf in the family hatchback class. It won’t replace the much-loved Octavia; instead, it’ll sit alongside the more saloon-shaped model in Skoda’s range, with a slightly keener price.

The new car has similar mechanicals to the Golf and the Octavia, because all three models are based on the VW Group’s MQB architecture. However, there are some crucial differences between them. 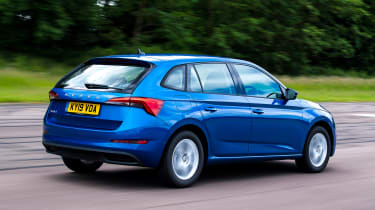 The Scala uses the smaller version of this platform, called MQB A0, which is more often used for superminis and baby SUVs, such as the VW Polo and Audi A1, and the VW T-Cross and SEAT Arona.

One result of this is that Skoda’s new family hatchback uses a torsion-beam suspension set-up on the rear axle, which is a similar arrangement to lower-powered models in the Golf range.

That’s not automatically a problem, though, because in the form we’re testing here – the likely best-seller, with a 113bhp 1.0-litre petrol and a manual gearbox – the Scala’s direct rivals also use this cheaper suspension layout anyway. Plus the car makes excellent use of its engineering, because it’s very comfortable on the move. 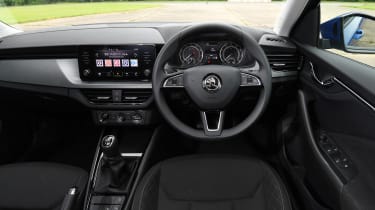 Even on our rough roads, the Scala rides every bit as well as a Golf, especially on the 16-inch alloy wheels that come on SE trim. The tyres’ large, soft sidewalls really help to cushion the worst of the UK’s surfaces.

The Skoda isn’t quite as refined as the Golf – hitting a pothole sends a louder thud through to the Scala’s cabin – but the effect that these impacts have is just as well softened in the Skoda as it is in the Golf.

The small wheels do rob the steering of some precision, admittedly, and it’s typically (for an MQB car) lacking in feel. But it’s accurate, so you can still be confident in placing the Scala where you want it to go. There’s enough grip to have some fun if you want to, as well, although the Scala isn’t as engaging as a Ford Focus or Mazda 3.

The 1.0-litre engine (another proven MQB quantity) is excellent, too, providing plenty of performance in the middle of the rev range. And the six-speed manual gearbox is slick, satisfying, and easy to use.

So despite being based on a smaller version of the Golf’s platform, the Scala is just as good to drive. Perhaps even more impressively, Skoda’s offering is also more practical. Its 467-litre boot is much larger than the Golf’s 380-litre loadbay, and there’s more room in the rear seats.

It’s a marvel of packaging that a car of this size can be so practical; and while the Octavia is slightly more roomy still, the Scala offers the hatchback body shape that UK buyers prefer.

The Scala also scores well in terms of interior quality; the materials used are a little cheap-looking in some areas – perhaps in a few more places than in a Golf – but the cabin feel is on par with what you’ll find in a Ford Focus or Kia Ceed – and there are softer materials in key places to lift the sense of quality. 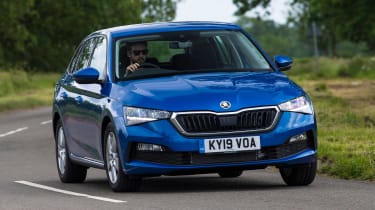 This is also helped by the car’s infotainment system; again, it’s familiar VW Group stuff, but the latest iteration of the software feels smooth and responsive.

An eight-inch screen is fitted to every model and features smartphone connectivity – Apple CarPlay and Android Auto – so even though navigation isn’t standard, it’s easy to get around using your phone’s mapping. The screen is well placed high up on the dash (so you don’t have to divert your gaze away from the road ahead for long) and the menus are intuitive, with big buttons around the screen that are easy to prod on the move.

At £18,585, the Scala SE undercuts every version of the Golf on price, yet it still gets 16-inch alloys, LED headlights, smartphone connectivity and that eight-inch screen, as well as Autonomous Emergency Braking, lane assist, a leather steering wheel and parking sensors, as standard.

Skoda is offering deposit contributions on the Scala, too, so if you put in £2,700, this 1.0 TSI SE will cost £229 per month over four years and 40,000 miles. That seems like a lot of comfortable family car for the money.