Our youngest reader yet helps give verdict on family carry-all 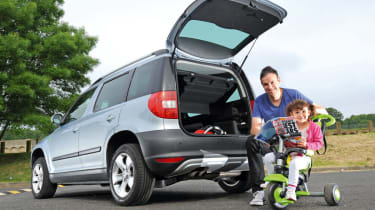 You made up your mind in emphatic fashion – the Skoda Yeti was your number one car in our Driver Power reader survey earlier this year. This followed its coronation as Car of the Year in our 2010 New Car Awards.

So the Hope household is now in the presence of a bona fide trophy winner (a bit of a novelty for us these days, given our Arsenal leanings). However, while I would never dispute the expertise of my colleagues or our readers, the only verdict I was interested in was that of my daughter Isla.

At two years and 10 months, her vocabulary is expanding by the day, but tact is not her forte. Isla pulls no punches, which can make life difficult when you regularly test different cars. Would it be a “Yay!” or a “Yuk!” for the Yeti?

First impressions were positive. She liked the chunky styling, although Mrs Hope and I are less keen. It’s just a bit too ‘Tonka toyish’ for me. As my wife Seema said: “One or two curves wouldn’t go amiss.”

Inside, though, we’re smitten. The driving position is comfortable, it’s all solidly put together and, crucially, everything is sited exactly where you would expect it to be and works just as it should.

The Yeti doesn’t need fancy adornments to prove its worth, and this is reflected in the £1,510 touchscreen radio/sat-nav system, which is a breeze to operate, and shames some of the overly complicated and unreliable systems in similarly priced cars. Only the sound from the speakers disappoints; there’s a lack of depth and a bit of a tinny feel to it.

That apart, the only other note of dissent has come from Isla. Fitting her Maxi Cosi Axiss car seat was simple, but rear legroom is tighter than she is used to, causing her to develop the annoying habit of resting her feet on the back of the front passenger seat.

Just a week after picking up the Yeti, the leather is filthy and despite constant telling-offs, her stock response is: “I need more space.” It’s worth bearing in mind if you carry kids in child seats.

The 416-litre boot is full of clever features, with the carry hooks especially useful – never again will Isla’s bucket and spade be left behind by a forgetful dad on a trip to the beach. Folding two of the rear seats always ensures there is enough room if Isla’s buggy is taking up too much space, although we may have to pack a bit more carefully come October when there will be another addition to the Hope clan.

But it’s on the road that the Yeti’s functional appeal shines brightest. The 1.6-litre diesel provides adequate pulling power, and although it’s not the most refined engine around, the noise is never intrusive. Motorway journeys are dispatched with ease, and only the firm ride in town disappoints.

Our eco-friendly GreenLine II model has stop-start as standard, which has helped deliver 47.5mpg to date, but it’s the simplicity with which the Yeti carries out all its tasks that really stands out. Little wonder you voted it Britain’s easiest car to drive in Driver Power.

And to that accolade, I’d like to add another: it’s kept my hyper-critical toddler largely quiet. In my eyes, that’s the Yeti’s best achievement yet.

“Great to drive, with a cleverly packaged cabin, eye-catching styling and award-winning customer care; a car you can choose with both heart and head.”James Disdale, Road test editor

“A fantastic car that ticks all the boxes. Skoda should be proud of its achievement, while all Yeti owners can feel smug knowing they have chosen a pure gem of a vehicle.”dgc4rter, via www.autoexpress.co.uk