SsangYong has resurrected a name from the past for its new pickup truck. Can it compete with the talented and ever more car-like opposition? 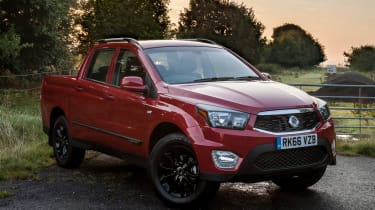 The SsangYong Musso is a genuine improvement over the Korando Sports it replaces, and the new drivetrain and gearbox impress. Though it’s not the most car-like to drive or sit in, the sheer value on offer means it’s hard to ignore the Musso if you’re after a rugged, double-cab pickup truck.

Those with long memories, and a penchant for unusual Korean cars, might remember the Daewoo Musso of the 90’s. It was a rugged 4x4, intended to compete as a budget alternative to the likes of the Land Rover Discovery and Toyota Land Cruiser. It was also a rebadged SsangYong – and it’s that company that’s resurrected the Musso name for 2016.

This time around, the Musso is a double-cab pickup truck. ‘Musso’ means rhinoceros in Korean, so there shouldn’t be any doubt as to the rugged qualities SsangYong wants to imply about its vehicle. 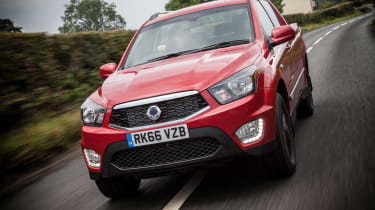 The new Musso is really more of an update to the SsangYong Korando Sports, but the changes go deeper than just the obvious new nose and new name. The biggest change is the new 2.2-litre diesel engine. It’s received a bump in power, pushing it up from 153bhp in the Korando Sports to 176bhp in the Musso – and it’s now Euro 6 compliant, too.

As well as power, economy has improved, with manual models now achieving a claimed 40mpg on the combined cycle. Opt for the automatic and that drops to 37mpg, but that’s still a competitive figure. The lower-powered Ford Ranger returns 39.8mpg and 35.3mpg in manual and automatic forms respectively.

The updated engine is less rattly than its predecessor and quite refined most of the time, though it can’t disguise the Musso’s commercial vehicle status. It offers flexible performance, despite suffering from some turbo-lag at low revs, and there’s definitely ample pulling power to make the most of the Musso’s 3,000kg towing limit and 1,075kg payload – figures which are slightly down on some of its main rivals.

That payload should fit easily into the SsangYong’s load bed, which is sized to fit a standard Euro pallet. It’s available with a choice of load covers, too – including a fully-windowed and painted hard top to make the Musso look a little less like a truck and more like an SUV. 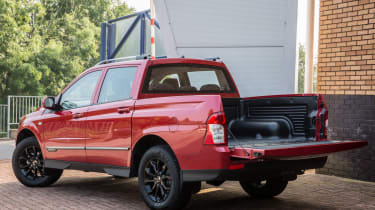 The manual model has a rather stiff shift action, while the fixed central armrest gets in the way when changing gear, so for this reason we’d go for the six-speed automatic. It’s a new addition, an upgrade from the five-speed box on the Korando Sports, and it’s slick enough to leave it to its own devices most of the time. If you do want to take control, you have to make use of a small switch on the side of the shifter to move between gears – no steering wheel paddles here.

The decent engine and gearbox are let down by the Musso’s steering, though. It’s city-car light and completely lacking in feedback, which isn’t reassuring on tight and winding country roads. Despite multi-link rear suspension that’s sophisticated for a pick-up truck, the ride is bouncy – even when fully weighted down with a tonne in the load bed.

The Musso’s interior has received quite the upgrade, and now even basic SE models come with artificial leather upholstery. Our EX was luxuriously equipped with heated front seats, automatic climate control, automatic headlights and wipers and full leather upholstery, plus a seven-inch colour touchscreen with reversing camera. 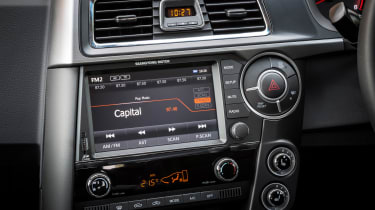 While the asymmetric interior design is quite interesting to look at, it’s sadly baffling to use. Controls are laid out anywhere and everywhere, with a central column of four identical knobs controlling the seat heaters, switchable four-wheel drive and the angle of the headlamps. Meanwhile, the foglights are consigned to a cluster with the electric mirror controls off to one side, and the ‘trip reset’ switch takes pride of place high up on the dash. You’d get used to it eventually, but we would have liked to see a more intuitive layout.

Materials inside aren’t quite up to scratch either. With competitors like the Nissan Navara fitting in ever more car-like interiors, the Musso’s cheap and hollow-feeling plastics don’t quite cut it. At least everything feels hard-wearing, and the wipe-clean upholstery should prove easier to keep tidy than the cloth fitted to many rivals.

As ever, though, SsangYong has a trump card with the Musso and that’s value. Our top-spec EX automatic model costs just £18,995 excluding VAT. The cheapest double-cab Mitsubishi L200 starts at £20,249, while the cheapest double-cab Ford Ranger is £24,935. Both of these are down on power and equipment, fitted with manual gearboxes, and make the SsangYong Musso look like very good value indeed.