Not the full blown Subaru BRZ STi we wanted, the BRZ tS is tweaked by Subaru's performance arm for a sharper drive but won't come to the UK 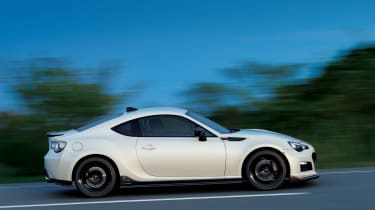 It’s a shame Subaru doesn’t have any plans to offer the tS’s upgrades on UK BRZs for the time being, as they do a good job of adding further appeal to the two-door coupe. It doesn’t get any more power, but the chassis and suspension upgrades work a treat. A turbocharged BRZ hasn’t be ruled out, but again, there aren’t any plans to bring it to the UK.

Coming off the back of a masterful class win in the WRX STI at the Nurburging 24-hour race this May, Subaru’s motor sport divison and customising arm, Subaru Tecnica International (STI) has just launched the limited-edition BRZ tS. In Subaru speak, that means “tuned by STI.”

The new BRZ tS inherits strategic suspension parts and chassis upgrades using feedback from the company’s race development program. There’s no power boost over the standard BRZ, but all the parts featured on our test car will ultimately be offered in the UK.

That’s right. STI wants to strengthen its overseas presence and create a performance brand that's as easily recognizable as BMW’s M or Mercedes’ AMG are in the UK. 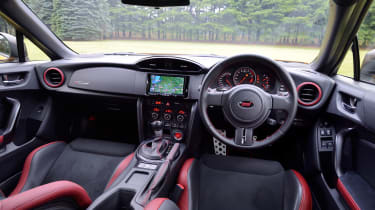 But don't expect Subaru to turn up with an export-ready BRZ tS anytime soon. STI will first launch its parts catalogue, streamlining and reinforcing the Subaru Performance Tuning parts business in the process. Complete cars like the BRZ tS could appear in the UK within the next 18 months.

So what is the BRZ tS all about? The coupe was developed to show what STI can do to enhance handling, not performance. It retains the same Subaru-built 2.0-litre Boxer engine pumping out 197bhp, but our STI contact would not rule out a possible turbocharged BRZ STI within the next two to four years.

On the outside, everything with the tS is subtle. It doesn’t look all that different from the standard car, apart from larger wheels, bespoke lip spoiler and twin sports exhausts. The STI also gets red accents around the front airdam and rear diffuser as well as tS badging on the bootlid. 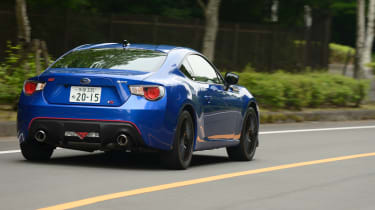 A quick glance under the bonnet and you'll find a new ‘flexible V-bar setup’. Comprising two braces in an inverted V-shape attached between the tower struts and bulkhead, the tweaks work to improve front-end rigidity and steering response. It also incorporates underbody flexible draw stiffeners that link the underside of the floor and the side frame to add even more initial turn-in response.

The V-bar, stiffeners and Bilstein dampers absorb minor road imperfections while reducing body roll and allowing all four tyres to maintain larger contact with the road. 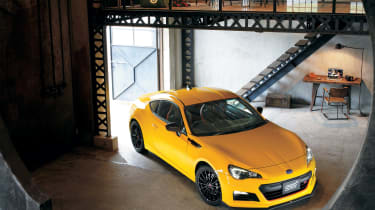 These changes allow you to brake later and enter a corner faster with less understeer than in the standard BRZ. The tS feels even more adjustable, and permits easier mid-corner corrections without feeling too unruly.

Interestingly, STi has fitted larger exhaust pipes which generate a beefier exhaust note, especially over 4000rpm. But to enhance interior comfort, they have incorporated sound-absorbing materials in the dashboard and tyre housing, which reduces wind and road noise entering the cabin.

If you’re a fan of the WRX STI interior then you’ll like the BRZ tS’s cockpit. It still falls someway short of the brilliant Audi TT, but boasting bespoke two-tone red and black Recaro full bucket seats, special STI gauges and leather steering wheels and gear shifter with cherry red stitching, the tS is an aesthetic step above the stock BRZ.