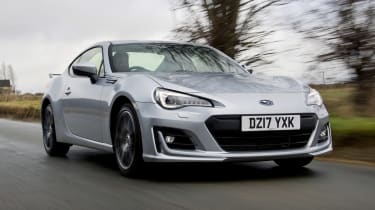 If you liked the Subaru BRZ already, you’ll likely love the small changes that have been made for 2017. It’s a bit nicer to sit in and fractionally better to drive so – slightly lacklustre engine aside – it remains one of the most entertaining driver’s cars below £30k. Unfortunately, many of the old drawbacks remain, so it’s understandable that many buyers flock to similarly priced hot hatchbacks that are easier to live with.

After Toyota released a fettled and updated GT86 for 2017, it was inevitable that Subaru would quickly do the same for its half of the legendary joint venture. Light revisions are the order of the day for the new BRZ, and we’re driving it for the first time on UK roads to see if the changes are enough to boost its underwhelming sales record here.

The exterior tweaks to the BRZ are subtle but more extensive than you might think at first glance. There’s a reprofiled front bumper and grille to give it a wider visual stance, new full-LED headlights and tweaked rear lamps. New 10-spoke alloy wheels and a chunky new rear spoiler round off the revisions. It’s not likely to change anyone’s view on how the BRZ looks, but to our eyes it’s a slightly more cohesive design than its Toyota cousin. 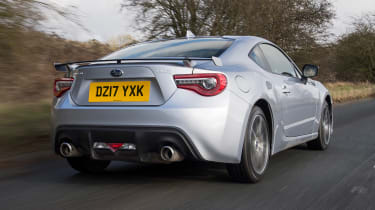 The BRZ’s (and GT86’s) low-rent interior has always been a bugbear of ours, so the minor refresh is welcome. The new multifunction steering wheel is a big improvement, while there are also new materials on the dash and increased leather stitching throughout to boost the ambience. A neat touch is the new 4.2-inch trip display in the dials; it features a G-force meter, a lap timer and even a torque and power curve graph.

Despite the revisions, though, the BRZ remains still more utilitarian than premium inside. Subaru argues that it’s about creating minimal distractions for the driver, but the fiddly infotainment and dated switchgear are still things that you’ll interact with on a daily basis. Similarly priced hot hatchbacks are in a different league for quality and ergonomics. At least the driving position is spot-on. 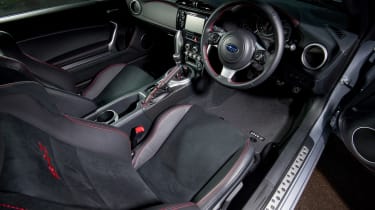 Still, the BRZ’s appeal centres on the driving experience rather than fit and finish, and on that basis it’s even more enjoyable than before. Subaru’s characteristic 2.0-litre flat-four ‘Boxer’ engine receives revisions for 2017 to improve responsiveness and bring down emissions, while new dampers aim to improve ride comfort and reduce roll.

Unlike US-spec cars, however, there’s no extra power on offer. That means that you’ll still find yourself wringing out every last ounce of grunt available to make progress on faster roads. Throttle response is great, and the motor at least sounds distinctive (though the noise can grate on long runs), but a lack of mid-range torque and reluctance to be taken right to the redline means it isn’t as flexible as the 2.0-litre engine in a Mazda MX-5.

That’s a pity, because the chassis is better than ever. The new dampers make it slightly more supple over bumpy roads without harming its brilliantly engaging and playful agility. It’s amusing even at low speeds, especially in the wet, where the lack of traction causes it to slither about with almost no effort.  It’s all helped by a rifle-bolt gearchange and involving steering, meaning there’s little else at this price point that can put as big a smile on your face and still be useable every day.

That price is Subaru’s biggest selling point over the GT86: the BRZ is only offered in one high-spec trim, bringing heated Alcantara seats, keyless entry and Bluetooth. While sat-nav is still a £1,250 option, it’s over £1,500 cheaper spec for spec than the Toyota.