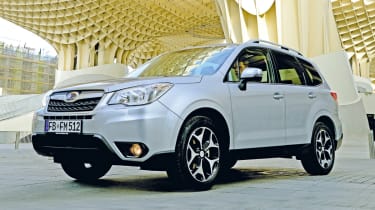 As Subaru’s UK range shrinks, the Forester is more important than ever. But the brand has always excelled at rugged, no-frills SUVs. The new model picks up where the old one left off, but offers more interior space, sharper handling and smart looks. It’s just a shame that the engines are off the pace for fuel efficiency.

Subaru is fast becoming a niche manufacturer in the UK. It’s already ditched the Impreza and WRX STi from the line-up here, and the Legacy could be axed at the end of this year, too. That leaves only three models – the XV, the Outback and this new Forester, which arrives in the UK in the spring.

The Forester is pinning its hopes on a more spacious interior, plus improved safety, performance and efficiency. Four-wheel drive is standard, while a lower centre of gravity and a more rigid body should improve its on-road performance.

The UK line-up will comprise 2.0-litre boxer diesel and petrol engines, both producing 148bhp, as well as a new 2.0-litre direct-injection turbocharged petrol engine delivering 276bhp. Both lower-powered engines will feature a six-speed manual gearbox, while a CVT is available on the petrol versions.

The exterior design is hardly sophisticated, although rugged Subarus have always had a workmanlike charm. Leg and headroom is reasonable with four adults on board, but add a third person in the back and it starts to become a squeeze.

While the wide door openings make it easy to hop in and out, the front seats are a little too high and don’t provide enough support. If you’re searching for soft-touch surfaces and high-quality switchgear, you’ll need to look elsewhere, too.

The boot is big, though, with 505 litres of space, or 1,577 litres with the rear seats folded – that’s larger than a Nissan Qashqai and on par with the BMW X3. An electric tailgate is now offered, but takes so long to open and shut it’s barely worth the effort.

Suspension settings are well judged, keeping things comfortable on rough ground while containing body roll well on tarmac. The steering, however, is light and short on feedback.

The 2.0-litre turbocharged petrol engine we tried is brand new, and makes its debut in the Forester. When it goes on sale in the UK, it will be tuned to produce 237bhp, but other markets will also get a 276bhp version.

With direct injection and a twin-scroll turbo, it’s keen to rev, yet delivers its maximum torque at just 2,400rpm – it’s as good at cruising around as it is charging towards the horizon.

Throttle response is excellent for a turbocharged engine, but the CVT does its best to spoil things, with a constant whine and occasional jerkiness.

High fuel consumption is a problem – you’ll do well to top 28mpg in real-world driving. Still, there’s always the diesel model, which returns a more acceptable (but not class-leading) 49mpg.

The most convincing aspect of the Forester’s performance is the all-wheel-drive system, which features hill hold and downhill aid functions. Press a button and the 4x4 system adapts to whatever conditions you are driving in, while the settings can be monitored through the infotainment screen.

Towing capability is good, too. The car can pull up to two tonnes, and a stabilisation system keeps things under control when your trailer or caravan is hooked up.