We pit the Cosworth tuned Impreza against three of its legendary fore-runners in an exclusive first test. 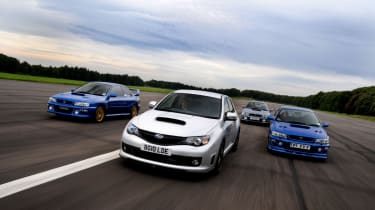 Four Imprezas, a total of 1,184bhp and a mile-long strip of tarmac... the battle of the hardcore Subaru special editions is on!

A manic chorus of turbo engines is followed by a screech from the tyres as our competitors catapult off the line. And with 119bhp more than the next most powerful car here, the new Cosworth-tuned Impreza this should find this a walk in the park – especially given that its rivals today are 10 years older. But half a mile in, the Cossie is lagging behind in third place, given the jump by the lighter Mk1 cars. The newcomer looks beaten. Then, as the speedo creeps past 120mph, the leaders almost appear to brake and the silver car storms home to claim victory.

This is the fastest, most hardcore Impreza ever. Called the Cosworth Impreza STi CS400, it’s the first road car developed by the legendary engine tuner since the Ford Escort version ceased production in 1996. It’s been worth the wait.

We drove a prototype of this car back in issue 1,121, but this is the full production version, and one of only 75 examples that will ever be built – exclusively for the UK market. We were hoping to get behind the wheel a number of weeks ago, but we’ve been made to wait while Cosworth ironed out a number of niggling faults.

And it’s a good thing the car is fighting fit, because this is no easy first assignment. We’ve brought it head-to-head with a trio of legendary Impreza special editions from the past – and the RB5, P1 and 22B are out to prove that simply being the latest doesn’t mean you’re the best.

The CS400’s spec makes for impressive reading. New pistons, forged con-rods and a high-pressure oil pump, plus an ECU remap and a larger turbo, hike the 2.5-litre four-cylinder boxer engine to 395bhp. That’s 33 per cent more than in a standard STi. The result is a claimed 0-62mph time of 3.7 seconds and a top speed limited to 155mph.

To handle the extra power, the six-speed manual gearbox gets carbon syncromesh on the first three ratios and a unique free-flowing exhaust system, featuring wider pipes for a throaty sound. Cosworth hasn’t stopped there. Eibach springs and Bilstein dampers have been added, plus the front end is lowered by 15mm and the track widened by 24mm. Larger-diameter AP Racing front brake discs make sure it stops as well as it goes.

To mark it out from regular Impreza STis, there is a number of styling additions, including lightweight 18-inch wheels, a roof spoiler and revised upper and lower mesh grilles. Inside, the front seats, steering wheel and rear bench are re-trimmed in Cosworth-branded black leather – but it’s not enough to disguise the fact that the cabin still feels cheap for a £50,000 car.

On the move, this is one seriously fast hatchback. Find somewhere with enough space to deploy the full 395bhp, and get ready for a shock. Push the throttle to the floor and a snarling crescendo from the quad exhausts is accompanied by a jet-like whoosh as the intake manifold hoovers up the air in front of the car and rockets you towards the horizon. Step off the throttle and the turbo’s wastegate dumps the unwanted boost with another deafening hiss. If it’s drama you’re looking for, this car’s got it.

The ride is firm, as we’ve come to expect from the Subaru, but the trade-off is an insatiable appetite for corners – something it shares with the three classics here today. Switch the throttle map to Sport Sharp and turn into a corner carrying as much speed as you like, and you feel the electronics shuffle the drive to the wheels with the most grip. Then, simply jump back on the throttle to fire the car onwards. Disappointingly, though, there’s a softness to the CS400. Squeeze the throttle and it’s a couple of seconds before the turbo reacts. The manual box is rubbery and vague, while the overly light steering gives no feedback from the front tyres.

Driving the other three classics back-to-back with the newcomer is a revealing exercise. There are stark similarities between all four cars – the delayed throttle response, light steering and the fact that they all get better the harder they are driven. But even though our three special editions all appeared on the UK market between 1999 and 2000, they each have distinct characteristics.

The 22B is as close to a WRC car for the road you can get, while the P1 strikes the best balance between raw performance and usability. The RB5 is the most docile of the three, but can still be driven at shocking speed. And that’s our only gripe with the new Cosworth. While it’s impressive in everything it does, and a huge amount of fun to throw around when you have the space to find its limits, it’s not as involving to drive as any of the other three – and let’s not forget its near-£50,000 price tag.

It’s a spectacular return to the road car arena for Cosworth, but the old Imprezas are still showing the newcomer the way.

Impreza P1 Widely regarded as the best roadgoing Impreza, the P1 arrived in 2000, producing 276bhp from its 2.0-litre flat-four engine. Rally specialist Prodrive tuned the chassis, and a cult classic was born. If you’re lucky, you can pick up one of the 1,000 P1s for around £10,000.

Impreza RB5 Built to mark the return of Richard Burns to the Subaru World Rally Team in car number 5, the RB5 launched in 1999 and only 444 cars ever left the factory. Each had a performance pack that boosted power to 237bhp; 0-60mph took five seconds and top speed was 143mph.