Our hatchback has been in for accident repairs, but now it’s back to full fitness 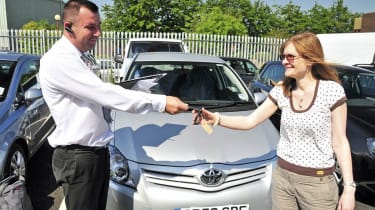 It turns out that I’m not the only one who thinks our Toyota Auris fails to stand out in a crowd. Days after filing my last report (Issue 1,081), where I mentioned the car’s anonymous styling, the Japanese machine was clearly invisible to the driver of an elderly Toyota Corolla.

As I was pulling away from a petrol forecourt, there was a sudden crunch of metal and cracking of plastic. In his eagerness to get to a pump, the driver of the Auris’s ageing relative had swiped the front of my car, pulling off the bumper, smashing the headlight and creasing the front wing.

Despite the accident taking place at no more than walking pace, I was still left shaken by the experience. My mood was made worse when I got out and was confronted with the sorry sight of the mangled Auris. To make matters worse, the crumbling Corolla of my assailant was left virtually unmarked by the impact.

After swapping our insurance details, I set about making our battered Toyota a bit more presentable. A bit of silver gaffer tape soon had the bumper back in place, while a short test drive revealed that none of the mechanicals had been damaged.

However, this was only a temporary fix, and a week later I took the Auris to DWS Bodyworks in Heathrow. The insurance-approved repair specialist took the keys and handed me a Vauxhall Corsa courtesy car to use while the Toyota was being fixed.

Incredibly, the repairs took nearly three weeks to complete, with the final bill coming to a wallet-bashing £1,282. This large outlay highlighted the downside of car designers’ demands for ever bigger and glitzier headlamp units, as well as the cost of repainting fashionable colour-coded bumpers.

On the plus side, the staff at DWS were always friendly and helpful, while the standard of workmanship is excellent – the Auris returned looking as good as new. It was great to get back behind the wheel of the Toyota after our enforced separation. While I had no complaints about the Corsa, it couldn’t compete with the Japanese car in terms of space, versatility and refinement.

I often have to undertake long motorway journeys with two adults up front and three teenagers riding in the back – and the Auris copes with ease. There’s a decent amount of cabin space, noise levels are low and the brightly trimmed seats provide excellent support. Better still, these extended runs have boosted the Toyota’s fuel returns to a respectable 30.1mpg – an increase of 3.3mpg since our last report.

The smooth 1.6-litre engine is now completely run in, which results in surprisingly peppy performance both around town and on the open road. It’s certainly a vast improvement over the slightly underpowered 1.33-litre unit of its predecessor.

Other than the unfortunate forecourt accident, the Toyota has been performing faultlessly, apart from one very un-Toyota-like glitch. Not long before the collision, the Auris’s optional rear parking sensors fell silent. Decent visibility from the driver’s seat means I’ve coped without the kit, but I’ll need to get the system checked by a dealer before my next update!

Until then I’ll continue to appreciate the Toyota’s fuss-free approach to family motoring. And while I understand that the Auris will never turn heads, I hope that other road users will at least acknowledge its existence in the future...

“In a sector full of increasingly bold and eye-catching models, the Auris struggles to make its presence felt. But look past the bland styling and you’ll discover a capable and well built family car. The recent introduction of a five-year warranty only increases the Toyota’s appeal.James Disdale Road Tester