The focus is on fun, not premium fit and finish, but the Toyota GT86 has tons of personality

The Toyota GT86 is a traditional-looking sports car with aggressive styling, which includes a long bonnet and a short tail, plus a large front grille and rear splitter with twin exhausts. The Subaru BRZ is virtually indistinguishable, aside from the badges.

The Audi TT has a more premium feel and appearance, especially on the inside, but the way the Toyota GT86 looks reflects its personality - it's fun.

The interior of the Toyota GT86 is full of cheap-looking plastics, but the layout (flick switches, for example) and the mock-carbon fibre trim on Pro models make it feel like a road-going racer. A 2017 facelift added more leather and Alcantara trim for the Pro model, too, as well as a digital trip computer screen amongst the dials, but hot hatch rivals such as the Peugeot 308 GTi are cheaper to buy and nicer inside. 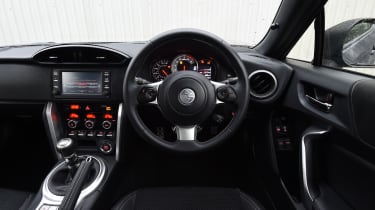 The Toyota GT86 TRD came with an even more aggressive body kit, which has a different front spoiler, side skirts and special 18-inch alloy wheels. This TRD bodykit isn't available via the UK dealer network, so if you want it, you'll need to search for it on the Japanese market.

Another special edition was the GT86 Aero, which had a bit of extra visual impact. There's a new bodykit, deeper front bumper and side skirts and a carbonfibre-effect rear diffuser. The most noticeable addition is a huge rear wing which looks a little bit like an awkward aftermarket add-on. Lighter forged alloy wheels were also part of the upgrade, which were designed to help reduce unsprung weight.

All GT86 models come with a six-speaker audio system, which is part of the Toyota Touch multimedia package. Featuring a 6.1-inch touch screen, the Bluetooth compatible system acts as the single interface for everything from sat-nav to smartphones.

There are a limited number of apps, including a ‘send to car’ function for google location searches. Upgrading to Touch & Go Plus adds voice recognition and email integration.