Economy and emissions lag behind class-leaders, and depreciation is significant too

Despite its small 2.0-litre engine, the Toyota GT86 is surprisingly expensive to run. The six-speed manual version returns up to 33.2mpg on the WLTP test cycle and emits 196g/km of CO2. The truth is, of course, that driving the GT86 in the manner intended is likely to see consumption quickly drop to the wrong side of 30mpg.

To put the figures into perspective, a similarly specced Audi TT with 2.0 TFSI power returns around 46mpg. The Audi is also far cleaner thanks to CO2 emissions of 138g/km. 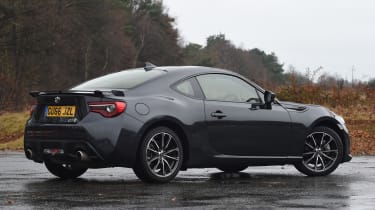 The Toyota GT86 with the automatic gearbox has slightly better figures. It manages a slightly improved 32.8mpg, but emissions of 183g/km are a lot better. However that model is best avoided as the manual is faster and far more fun. If you're looking at buying a GT86, you'll probably be happy to sacrifice some economy and emissions for the added fun of the manual box.

Unlike rivals from BMW and Audi, Toyota offers no fuel-efficient alternative to the petrol engine - a diesel would add weight, as would Toyota's hybrid system.

Servicing and maintenance costs should be reasonable for the Toyota GT86 though, and all models come with Toyota's five-year warranty so it’s not all bad news.

The Toyota GT86 sits in two insurance groups: 34 for the manual and 35 for the auto.

The GT86 appears to be gaining cult status as one of the last naturally aspirated, manual sports cars for sale. While residuals in the past haven't been that impressive, a retained value of 47-48 per cent after 3 years/60,000 miles for the current car are actually better than the returns for the 2.0 TFSI Audi TT. However, the Mazda MX-5 has stronger scores, although the folding hard top-equipped RF is at a similar level to the Toyota.